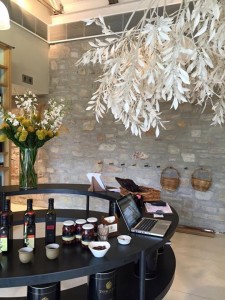 Previously the Tokara Delicatessen was managed by Tokara owner GT Ferreira’s wife and daughter, and a succession of chefs was in the kitchen over the years. Food was average and service poor, but the building interior and outside seating above average. 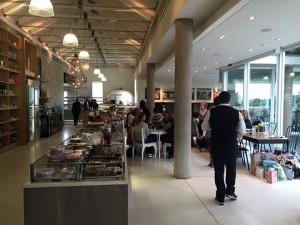 management took over. Some maintenance issues inside and outside were fixed, and it seemed that all staff were replaced in the kitchen and on the floor.  Verno formerly worked at Volkskombuis and the Stellenbosch Hotel. We had some initial communication problems, but it got better to understand him as we went along, as he clearly felt more comfortable speaking in Afrikaans.

The menu has changed since Chef Aviv Liebenberg took over the running of the kitchen. I first met Chef Aviv when he opened Reuben’s at the Small Hotel in Robertson, from where he worked for Chef Reuben Riffel at the 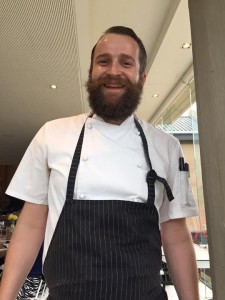 One&Only Cape Town, at Tokara Restaurant, and at Reuben’s at Abalone House in Paternoster. Since moving to the Tokara Delicatessen, Chef Richard Carstens of Tokara Restaurant has been working with Chef Aviv in the menu design and management and it is Chef Richard who invited me to try the Delicatessen, which I did yesterday with a friend. A surprise was to discover that Chef Aviv also grew up in Wellington, my home-town!

The menu is introduced with a write-up about the Tokara olive oil, tastings of which can be done on arrival. The Tokara Olive Shed commenced fifteen years ago with a 4 ha olive grove, producing 500 bottles from bought-in fruit in its first year. The production has grown to thousands of bottles of extra virgin olive oil both Tokara branded and under other brand names for olive farmers. The Tokara olive oil range includes Leccino, Mission, Frantoio, a multi-varietal blend, and a Tokara Premium blend.

On our table was Oryx desert salt and black pepper grinders, a holder with Tokara Multi-varietal olive oil and balsamic vinegar, a vase with pincushions, and a paper serviette. Our table faced the vineyards, and we could watch the peacocks having a good time as the sun emerged from what had started as a grey day.

The menu and winelist are bound in an A5 booklet. Breakfasts are served until 12h00, the offering ranging from a basic jam and toast (R25) to bacon and egg Hollandaise, croque Madame, smoked trout on rye, and brioche French toast. The Breakfast page has a note encouraging one to be patient in waiting – ‘it’s worth the wait’, it states! Chef Aviv 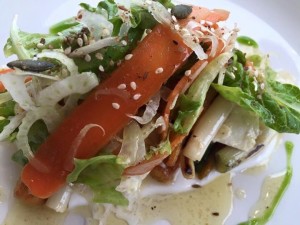 recommended the Garden Salad, a special of the day, for which the herbs had been picked in the herb garden close by on the farm. The fresh salad contained baby carrots, fennel, lettuce, roasted carrots, yoghurt, sesame seeds, Buffalo mozzarella, charred spring onion, slices of orange, and an orange and cumin dressing (R70). Caesar salad costs R70.

The menu does not differentiate starters and main courses, allowing one to choose dishes by ingredients. Chef Aviv 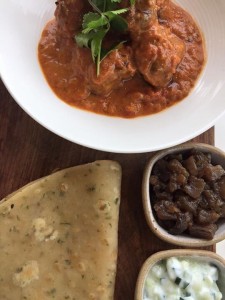 recommended that we try the Masala-spiced beef meatballs, served with somewhat chewy coriander chapatis (unleavened Indian flatbread) and sambals of cucumber and yoghurt, and aubergine chutney (R95). It was a colourful dish and ideal for the misty day.

The Manager of the Delicatessen, Clarissa Oberzaucher, was friendly, and came to welcome us 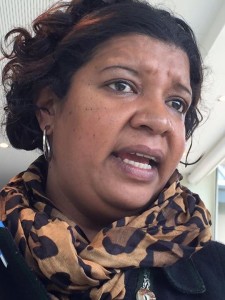 especially. When I reacted to her Austrian/Bavarian jacket she told me that she is married to an Austrian who works at BICCCS restaurant in Franschhoek. She has previously worked at Rickety Bridge. 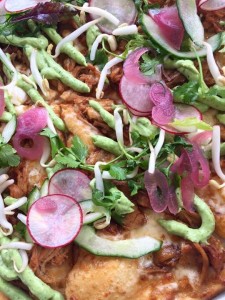 I did not recall pizza being offered in the past, and Rudolph and I shared a very colourful BBQ pork, avocado, feta, radish, pickled cucumber, radish, and sprout pizza, the sprouts having replaced the jalapeño at my request (R90). Other pizza options are lemon and chili prawn (R105), Parma ham with artichokes (R90), tikka chicken (R85), and Panzanella vegetarian pizza with Buffalo mozzarella (R80).

Aviv insisted that we try a dessert, and originally suggested caramelized poached pear with honeycomb ice cream (R45). We changed our mind when we saw on the Dessert blackboard the 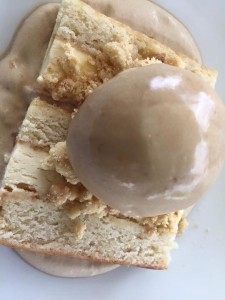 description of the almond mascarpone terrine with coffee ice cream, absolutely delicious with meringue shards in the ice
cream (R45). Lemon meringue tartlet (R50),
chocolate eclair with chocolate mousse (R55), chocolate sponge and Brandy (R50), and a selection of ice cream and sorbets are also offered. I received an amazing dry cappuccino, with a froth 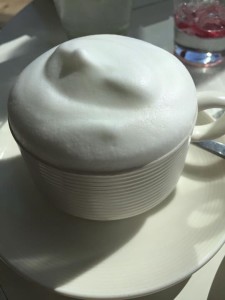 MCCs offered are by Graham Beck Brut Rosé NV (R200) and Simonsig Kaapse Vonkel NV (R190). All other wines are by Tokara, the Sauvignon Blanc and Chardonnay offered by the bottle (R120) and by the glass (R35). Tokara Shiraz and Cabernet Sauvignon is charged at R45/R160. No vintage information is supplied. Craft beers and ciders are also offered.

I didn’t spend time in the Deli section, but there seemed few changes to the offering of Belgian chocolate truffles, Tokara olives and olive oils, charcuterie, cheeses, coffee, venison, breads, fudge, maple syrup, chicken pies, Boerewors, and more. The playground outside was an absolute hit, and a children’s birthday party was held at the Delicatessen, without any disturbance to us seated inside. A special children’s menu is available.

The changes made at the Tokara Delicatessen over the past three months clearly have been most successful, as the car park was full when we arrived at 13h30.  We therefore appreciated Chef Aviv coming to our table on a number of occasions, making recommendations, and checking on us, always smiling. He said that the Delicatessen was not at full capacity, it being able to do more, especially over weekends when it is exceptionally busy. A nice touch was that the Tokara Restaurant Manager Johan Terblanche came to check on us at the Delicatessen, and he showed me the impressive interior decor changes (carpet removed, new chairs) at the Tokara Restaurant after our lunch too. 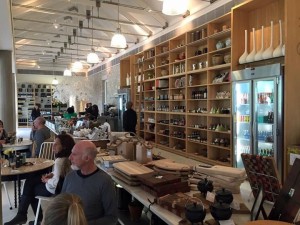