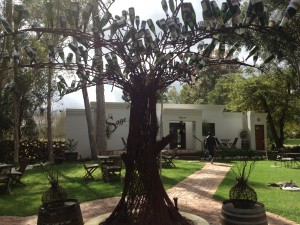 I would not have known about Sage restaurant at Chabivin Champagne and MCC House on the Blaauwklippen Road in Stellenbosch had I not received an e-mail from its Chef Jan Kruger, alerting me to their move to their new home.  The restaurant also manages the tasting of the Chabivin Methode Cap Classique (MCC) wines, and its imported French champagne Guy Charbaut range, a sparkling pairing.

I arrived on a chilly and grey autumn day, but chose to sit outside to enjoy the peaceful garden with a view onto the Helderberg mountains.  The garden is surrounded by bluegums, and has as its centrepiece a most unusual wire ‘tree’ which has bottles attached to it.  Bistro style chairs at wooden tables reinforce the Bistro nature of this eatery, being a small restaurant with a MCC and champagne bar, its modest prices, and its French style cuisine.  The restaurant is named after sage, one of the oldest culinary and medicinal herbs.

I met the owner Alison Cronje and Chef Jan in the lounge section inside the restaurant, with three comfy couches and a massive fireplace for the cold winter to come.  They moved Sage to Chabivin a month ago, having experienced some problems from the authorities with their previous venue at Sweetwell Farm, which belongs to Alison’s husband Hendrik, who has been running a piggery at the R44 smallholding for 27 years, and supplies Sage with pork and beef. The predecessor to Sage at Sweetwell Farm was Nice, which was run by the very nice Anne and her late husband Chef Chris de Jager.  To accommodate Sage, the Chabivin tasting room was transformed into a restaurant, and sommelier Justin does the Chabivin MCC and Guy Charbaut champagne tasting at the tables of their Sage guests, to bring out the 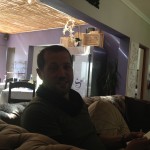 pairing between the Sage dishes and the sparkling wines and champagnes.  Justin was once a construction worker, became a barrista at the previous Sage, and completed his sommelier course at the Cape Wine Academy last year.  Chef Jan started his cooking career at a kibbutz after school, returning to Johannesburg to work at Ile de France with Chef Marc Guebert (he now owns Le Souffle), who taught Jan to cook in the French style, and the importance of sauces. In the Cape he worked at 96 Winery Road and Eatwell in Stellenbosch, before joining Sage three years ago.  I liked Chef Jan’s explanation of the restaurant operating seven days a week, saying that he did not want to confuse his diners in having to remember on which days they are open, a problem diners face with most restaurants!  His policy is to offer ‘quality finer dining‘.  He will be starting a vegetable and herb garden at Chabivin. Currently he sources from Wild Peacock, Nouvelle Mushrooms, and Steve the Magic Man.  While the menu is changed regularly, some standards are never removed, so that the diners referred by others will get to try the favourite dishes.

The restaurant interior is painted purple, perhaps a colour symbolising sage.  A parrot in a cage 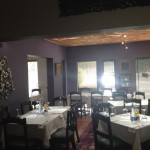 and dried flowers in the lounge section jarred in what could become a popular restaurant, given its excellent cuisine, and MCCs and champagnes.  The restaurant seats 45 inside and 30 outside. Tables are laid with table cloths and material serviettes inside, while there are no tablecloths outside.

Bread is brought to the table in a woven basket, both unexciting.  The menus and the winelist are typed on cream paper, and laminated.  The Breakfast menu sounds delicious, with dishes costing R60 – R70, and including rosti, egg and bacon; a poached Frankfurter and eggs; Eggs Benedict; and Français Pain Grillé, with smoked bacon, avocado and honey. The A3 lunch menu is sectioned as ‘start…’, ‘inspired’, and ‘end…‘.   Starters cost R45 – R55, and include ostrich carpaccio, Tunisian pork on bruschetta, Cape Malay curried yellowtail, and crumbed calamari. None of the main courses cost more than R120, and a mix of fish, meat, and vegetarian dishes are offered.  Two pork dishes are available, the meat coming from Sweetwell 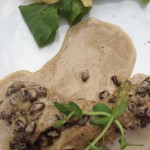 Farm. The tender pale pink pork fillet I ordered was delicious, made so by the unusual brandy, cream and raisin sauce in which it was poached, topped with pea shoots, and I requested a spoon to finish every last drop.  The shoestring fries were not fully cooked and were too strongly drizzled with truffle oil for my taste.  Pork belly is served with a sundried tomato cream served with basil pesto couscous, which sounds delicious too. Other main courses are seared tuna, lamb burger on brioche, kingklip, chicken, duck, and rib eye steak.  The apple flan 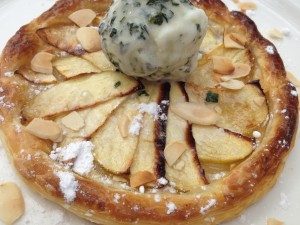 dessert was made with the lightest pastry and sliced apples, dusted with castor sugar and sprinkled with almond flakes, was served with an unusual basil ice cream.  Being a cold day, the ice cream could have been replaced with cream, to make the flan the hero, as the basil was fighting with it.  Crème brûlée, chocolate fondant, meringue, and a cheese board are other dessert options, costing R50.

The Chabivin vines were planted two years ago. The estate currently buys in grapes locally, and its sister Guy Charbaut champagnes are made from grapes from three farms in France.  Guy Charbaut’s sister Brigitte and her husband Jean-Pierre Abiven are the local owners, and the name of the wine estate came from an amalgamation of the two surnames.  The prices of the Chabivin MCC and Guy Charbaut champagnes are the same in the restaurant as they are for sales via the Tasting room, a commendable pricing policy.  Most of the wines are available per glass too.  The Chabivin bubbles ‘linger for longer’, Chef Jan said.  There are three Chabivin MCCs: The Mademoiselle Megane NV is made from 100% Chardonnay grapes, 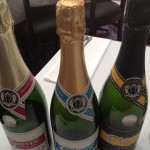 is bottle fermented, matured for 48 months, has a light sweet taste, and costs R30/R120.  The Jean-Michel 2008 costs R35/R150, and is made from equal quantities of Pinot Noir and Chardonnay, on the lees for 48 months. The Acléméé Semillon 2005 is unusual in being made from Semillon grapes only, and is bottle fermented and matured before degorgement for 72 months (R45/R210).  There are five Guy Charbaut champagnes: Selection Brut NV is made from Pinot Meunier, Pinot Noir, and Chardonnay, lying on the lees for 36 months (R60/R380); Rose Premier Cru NV is 100% Pinot Noir lying on the lees for 36 months (R70/R410); 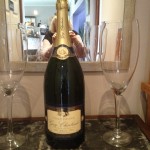 Blanc de Blancs Premier Cru NV is 100% Chardonnay, and is aged on yeast for 48 months (R70/R440); Millesime 2000 Premier Cru, with 67% Pinot Noir and 34% Chardonnay, is left on the yeast for 48 months (R80/R500); and Memory 1998 Premier Cru is made from 100% hand selected Chardonnay grapes (R1000).  The Blanc de Blancs and Millesime are available in a 375 ml bottle too, costing about R200, and as magnums. Commendable is that ‘Chabivin friendly‘ wines from the neighbourhood are also offered on the wine list, including Meinert, Guardian Peak, Ernie Els, Peter Falke, and Waterford Estate.  Winemaker Hendrik Snyman came to say hello.  He has worked for the family business since 2007, first in France, and now locally.

Sage is well hidden, creating peaceful country bliss with heavenly French-influenced cuisine and a good MCC and champagne range at affordable prices.  I will go back to Sage, as Chef Jan is clearly a talented saucier!

POSTSCRIPT 25/4: We received this refreshing e-mail from Chef Jan in response to our blogpost about sage: ‘I just want to say A HUGE THANK YOU for the wonderful article you wrote & posted on Whale Cottage Blog.  I saw it Tuesday morning and I was blown away by the in-depth writing and analysis. It was a true pleasure to have met you and I hope we cross paths in the continuous future.  Thank you for honest comments; both the critical and the complimentary. Kind Regards. Jan Kruger.  Sage Restaurant’ 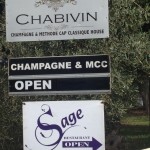 Disclosure: Chef Jan refused to accept payment for my meal and the MCC tasting.