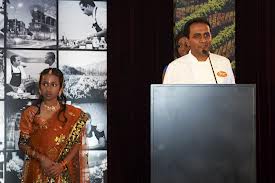 The most bizarre restaurant review I have ever read (other than the weird ones by IntertwEAT) is the one for Aarya at Montecasino, the restaurant which MasterChef SA Season 1 winner Deena Naidoo ‘co-owns’ with Tsogo Sun, which was part of his R8 million prize package last year.  It was not a good review at all.

When Chef Deena was announced as the winner at the end of MasterChef SA Season 1, he was reported to have complained to a City Press reporter about the deceitful prize, in that he would not be receiving the R 7 million restaurant to keep, as was intimated in all the MasterChef SA publicity throughout the Season 1 screening, the restaurant portion having made this the largest prize ever for a South African reality show, M-Net boasted at the time.  Chef Deena, with the help of M-Net’s PR department, quickly issued a media statement, denied Chef Deena’s criticism of Tsogo Sun, and he gushed with delight about his prize.  Embarrassingly for the hotel group, Chef Deena declared that he had no intention of resigning from his job at Nedbank in Durban, or moving to Johannesburg.  Tsogo Sun allowed Chef Deena to take on the restaurant prize on his terms – he would remain working at Nedbank, visiting the restaurant five days a month. He was also allowed to rename the restaurant Aarya, after his daughter (left), and was involved in its interior decor, mainly featuring posters of the Season 1 Finalists.  On Twitter we have seen both praise and criticism of the restaurant since it opened in November.

It was a shock to see the review of Aarya in the ‘Food Weekly’ supplement of the Sunday Times two weeks ago, not only due to the severity of its criticism, which is not a problem in itself, but because it was written by Chef Arnold Tanzer, the Culinary Producer of Season 1 and Season 2 of MasterChef SA, and because MasterChef SA is advertised in the same supplement of the newspaper!  Given that Season 3 is likely, one wonders about the politics between M-Net and its sponsor Tsogo Sun, for the attack on the sponsor’s restaurant, destroying its credibility, as well as of MasterChef SA, as Chef Deena should have been trained to run a restaurant worthy of the status reflected on MasterChef SA!   Tsogo Sun has already scaled down its prize for Season 2, without placing any value on its meagre package, being a flight and stay for five days at Maia Luxury Resort & Spa in the Seychelles, making the MasterChef SA Season 2 prize value no more than R1 million in total, we estimate!

Chef Arnold writes that he arrived unannounced and was disappointed to not find Chef Deena at Aarya, an unfair expectation and criticism, given how seldom chefs are at their restaurants (Chef Reuben Riffel is about to open his fourth restaurant, and is seldom in the kitchen of any of his restaurants)!  It was widely publicised that Chef Deena would only be at the restaurant five days a month, and Chef Arnold has an inside track in being part of the MasterChef SA production team, so he should have known this.  But he writes that Chef Deena is to be seen all over the restaurant, on posters, the menu, and on the ‘faux blackboard’. Chef Arnold summarises the Aarya menu, criticising the ‘1980s de rigueur hotel dish’ of kingklip, wilted spinach, and lemon butter, and the ‘ubiquitous Karoo lamb shanks‘, summarising it as follows with a further dig at the MasterChef SA sponsor: ‘All in all, not an adventurous, technically skilled menu, but then this is Montecasino’!

MasterChef SA wine sponsor Nederburg gets a positive plug from Chef Arnold, while the food he was served did not!  The salt and pepper calamari starter had no salt nor pepper, and the aioli and ‘store-bought’ dipping sauce came under the whip too. Chef Deena’s MasterChef SA masterpiece of Butter Chicken received rave reviews from the judges in the show, and this signature dish is described on the menu as the ‘award-winning mild chicken curry with jeera basmati rice’.  It was praised by Chef Arnold for its tastiness, but he criticised the jeera rice for not containing cumin, and Mrs Balls chutney being part of the sambals served!  The char-grilled lamb ribs also did not make the grade, being a ‘tough stack of fatty lamb swathed in sweet barbeque sauce’. The concluding paragraph adds final insult to injury, both to Chef Deena and to Tsogo Sun: ‘Eating at Aarya’s (sic) is like eating through a carnival mask. The vivid flavours and complex textures that were the hallmark of Naidoo’s cooking on the show have been stripped out.  I am not surprised – Aarya’s (sic) is, after all, situated in a faux Tuscan complex that sells promise’! Ouch!

Chef Deena was given an opportunity to reply. He relays his pride in how far the restaurant has come in the past seven months, and points out that it is not aspiring to be of Michelin-star quality, is not meant to be gastronomic but is homely, and is about doing simple food well, enjoyed in a ‘relaxed, family restaurant‘. The restaurant’s satisfaction rate is 93 – 95%, he says, but he does not share how this is measured.  He speaks to each of his staff and 200 patrons on the days that he is at the restaurant. Chef Deena is looking for a space in Durban for a new restaurant to open when his Tsogo Sun prize runs out at Aarya in September next year.

One wonders how Aarya will fare now that Season 2 of MasterChef SA has started.  Chef Deena and his seventeen co-Finalists of Season 1 will fade from memory as the new bright and bushy-tailed characters of Season 2 dominate our screens for the next two months!  Tsogo Sun must be regretting its dishonest and controversial restaurant prize, which is more than biting the hotel group back in karma!  One doubts that Tsogo Sun will sponsor Season 3, given the humiliating review by Tanzer!