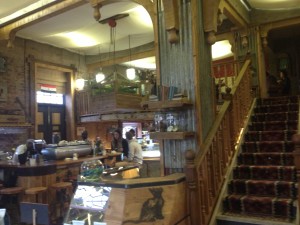 Whilst in Stellenbosch yesterday, I popped in at the new Schoon De Companje, the expanded De Oude Bank Bakkerij which opened three years ago and which is now a collection of mini artisanal ‘shops’ under one roof, whilst retaining its cosy restaurant section at the back of the restaurant.

The entrance is now on the corner of Bird and Church Street, where the Dylan Lewis art studio used to be, and opens into the market style space, with different section, each branded separately, most on a Dutch theme. A mat on the floor says ‘Die Kaap is weer Hollands’, reflecting the Schoon family’s Dutch roots.  One of the staff told us proudly said that owner Fritz Schoon’s mother Jenny had planned the old-world character wood-dominant interior, and has done an excellent job, not being an interior designer.  Design quirks 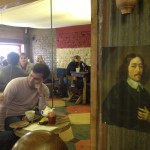 attract attention, like a picture of Jan van Riebeeck in the upstairs seating area.  The menu introduces the thinking behind De Companje:  ‘Schoon means beautiful in Dutch. It is a fitting description for what we do here, the way we do it, where we are and our opinion of you, the people we do it for.  De Companje is a collaboration of artisans in the true sense of the word, not merely a label, but rather the artisan that contributes to his community.  We do so with the skills that we have acquired over time through study and practice and by using only the finest and purest ingredients. We do so with integrity and uncompromising determination. We do so with love, Het Schoon Familie’. 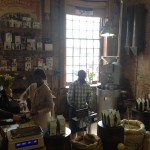 Conti Coffee sells roasted coffees specially blended for Schoon De Companje in the ‘branded ‘Het Roosterij’, and its staff operate the coffee sales section.  I found it difficult to communicate with the staff member, when trying to obtain more information about the origin of the De Companje coffee. In a section close by the coffee is made, serving the whole restaurant.  Chanel Schoon, Fritz’s sweet wife and talented artisanal ice cream maker, sells her range of ice creams under the ‘Fanny Chanel‘ name, the flavours changing regularly and include chocolate espresso, salted caramel, vanilla, lemon curd, guava, banana and caramel, and chocolate brownie. She recommended that I try one of her ice creams in their 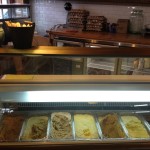 self-made cones, made with a waffle machine Fritz had imported for her from Germany, a strong crispy cone which did not become soggy at all.  It is unclear if proteas are for sale, probably coming from Bartinney, whose owners Michael (of FNB fame) and Rose Jordaan own the building. An organic vegetable and fruit section stocks avocados, guavas, tomatoes, 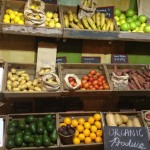 In the De Brasserij seven beers are available on tap, supplied by Devil’s Peak and 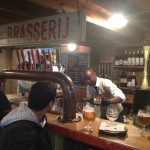 The bread section is the centrepiece of the artisanal market space of Schoon De Companje, and represents how De Oude Bank Bakkerij started three years ago.  Fritz’s breads are popular, and sell out quickly, some being used in the restaurant, and also by other restaurants.  They make baguette, pain ristique (similar to ciabatta), sourdough, dark rye, olive sticks, seed sticks, and croissants (plain, chocolate, and almond), Butterkuchen, as well as pastries.  Near the exit is the meat section, called ‘Nice to Meat You Boutique 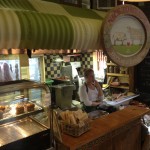 Butchery‘, its signage informs. Fritz’s sister Katryn Schoon is the proud owner, being fascinated with meat and having just completed her Master’s degree in Meat Sciences.   She makes boerewors, droë wors, and biltong for her butchery, and buys in beef from WP Oosthuizen outside Stellenbosch, lamb from Cape Country Lamb, chicken from Simply Wholesome, pork from Charlie Crowther at Glen Oakes and Happy Hog, and wagyu from Woodview Farm in the Free State. She also smokes chicken breasts.  Charcuterie is also sold here, and Katryn shared that her steak has been an absolute hit in the past two weeks since they opened the new section.  A wine shop called ‘Het Wijnwinkelje’ is upstairs.

The bakery section, where owner Fritz still bakes his popular breads, has 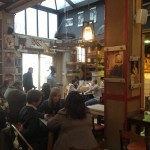 been retained, but no longer has the bread sales and payment counter. The Rosie’s bar section, which was a more recent add-on, now is the expanded kitchen.  The open roof  in the restaurant section has been closed, allowing more tables to be added.  We saw Fritz lending a helping 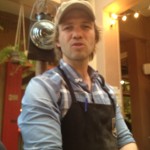 hand in his extremely busy restaurant, every table occupied, his apron covered with flour from the bread baking earlier in the day.  He came to chat quickly, saying that he is enjoying the new challenge, and said that service hiccups in the first fortnight seem to have been sorted out.  His biggest disappointment has been that some of the new staff he appointed for the expansion were not delivering their best, and he has had to let some go already.  They also have to get to know their new Point of Sale system, more complicated than anything they have used before.  Chanel was 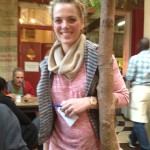 seen on the restaurant floor, as well as in the artisan market section, always smiling and helpful.

Breakfasts are served until 11h45, most cooked dishes (scrambled eggs, Croque Madame, smoked trout scotched eggs, and an unusual breakfast item roasted bone marrow on toast) costing around R50. Lunch is served until 15h00, and now includes cooked dishes such as Beef Frikkadel Sarmie (R60), Fish & Chips (R60), and Beef Burger (R75).  They have retained the pioneering offering of slices of breads, butter, jams, charcuterie from Neil Jewell, and cheeses, so that one can make up one’s own sandwiches.  The sandwich offering is also available from 15h00, as are pizzas at R55, and a ‘Laudenbach special’ of pretzel, Weiss Wurst, mustard, and 330ml draught beer, for a reasonable R65.

Schoon de Companje (the actual brand name is confusing, as the menu uses both the full name and ‘De Companje‘) was bursting at the seams late yesterday afternoon, yet seemed under control, with very good service.  It is a big business now, and one hopes that Fritz and Chanel can keep their finger on it, requiring their presence full time.  It is a clever concept, to expand their artisanal bakery range into an allied artisanal product one stop shop!