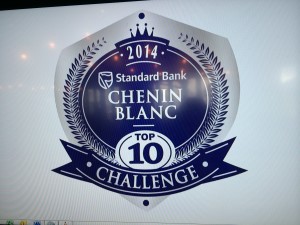 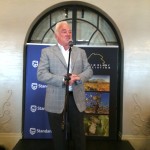 adding that ‘Chenin Blanc is THE white wine of South Africa‘!

A total of 126 wines was entered for the Challenge, and assessed blind by a panel of judges which included chairman Christian Eedes, Jamie Goode, Alan Mullins, Carrie Adams, and Higgo Jacobs. Interviews were conducted with the judges,  Allan Mullins of Woolworths saying that Chenin Blanc has been underrated for so long. He lauded Standard Bank for the support of the competition, and as Chenin Blanc drinks so well, it should be drunk by all.  It is a gem of a wine variety, and ranges in price between R25 – R 300 in retail outlets.   British wine writer Jamie Goode said that our country has a variety of Chenin Blanc styles, ‘ranging from the ‘VW Beetle to a ‘Rolls Royce’! Eedes said that he was honoured to chair the judging panel, and while he may be ‘shot down‘ for the results, having the auditors made the results indisputable. Out of the wine entries, 32 were subjected to a second round of evaluation, and the ten best chosen.    Grant Thornton were the auditors of the Challenge. 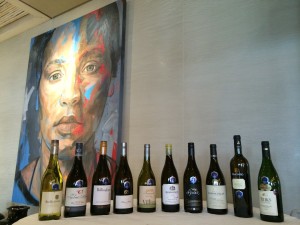 Forrester said that the ten champion winners represented a diversity of styles, ranging from rich and bolder, to fresh and fruity, as well as a diversity of lesser as well as better known wines.   The top ten Chenin Blanc Top 10 Challenge wines are as follows, with a short summary of each winning wine from the judges, and the winemaker collecting the award:

Each of the ten winners won R20000, but the Challenge rule was that the money should be spent on improving the social and economic well-being of the staff on the farm.  Remhoogte said that they will give the money to the Pebbles Project, to put in a geyser for their creche, and to build a jungle gym for the children;  Stellenrust is a Fairtrade wine supplier, and will put the money into an Education Fund, for bursaries and to set up a computer room; Villiera will also donate its money to the Pebble’s Project for a school learner project; Bellingham will spend the money to offer a mobile library and computer service in the Breedekloof;   Spier will spread their winning money over the Anna Foundation, the Little Angels, and Foodpot projects in Stellenbosch;  Rijk’s will renovate restrooms and meeting rooms for their staff; Kleine Zalze will ask their Fairtrade committee how the money should be spent; Simonsig will improve their after-school and creche facilities; KWV will donate to the Pebble’s Project too, sponsoring the education of children;  and Perdeberg will establish a farm creche.

A video interview was shown with Robert Redford’s endorsement of Chenin Blanc, a wine variety he tried in South Africa and spontaneously expressed his enjoyment in drinking it, which was filmed at a lunch in Franschhoek earlier this month.

Chef Christiaan Campbell and his team prepared an unusual five course meal, each course served with two of the ten Chenin Blanc 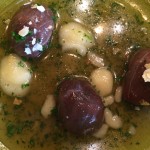 Top 10 Challenge wines.  The starter of tuna balls in a cold smoky broth with black pepper and pineapple was one of the most unusual dishes I have ever tasted, the tuna giving the dish dark red/purple colour accents.   The broth was paired with Stellenrust Chenin Blanc 2014, and its fruitiness made it the most popular wine of 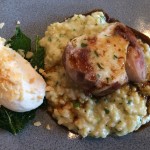 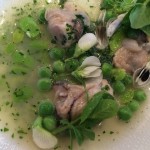 as well as sweet peas, in a little broth, one of two best liked dishes out of the five at our table.  The oysters were paired with Villiera Traditional Barrel Fermented Chenin Blanc 2014 and 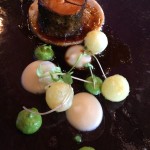 The dessert course was purposely not sweet, given its pairing with Simonsig Chenin Avec Chêne 2010, and Rijk’s Cellars Private Cellar Chenin Blanc 2009, said Chef Christiaan, who chose to make a unusual Huguenot cheese Brûlée, with pecan nuts, and flavours of the citrus 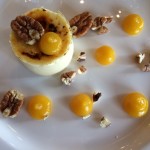 Willie du Plessis, Head of Business Banking Western Cape at Standard Bank, congratulated the winners, and said that his bank is proud to be associated with the event in honour of Chenin Blanc wines.  It was announced that 500 mixed cases of the ten wines will be made available to the public. A Standard Bank guest at our table was ready to buy a case immediately, he was so impressed with the quality of the ten wines. 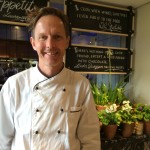 It was a shock to hear that Chef Christiaan will be leaving Delaire Graff in mid-October, to join Boschendal.  The simplicity of his dishes and unusualness of them made the lunch yesterday very special, his Less is More plating unusual relative to many overdone plates we see so much of in top restaurants.  Chef Christiaan has made a name for himself in the ethical sourcing of fish and meat, and developed a herb and vegetable garden at Delaire Graff.  He will  be a great loss for the wine estate.