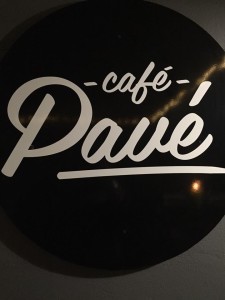 I received an invitation from Chef Couple Sidwell Yarrow and Angelique Dreyer to attend the launch of their Café Pavé at Camberley Wine Estate in Banhoek in Stellenbosch ten days ago. It was my first visit to the low-key wine estate neighboring Michael and Rose Jordaan’s Bartinney, and I was impressed with the quality of the food that was served.

Camberley is owned by the super-friendly John Nel, who told me 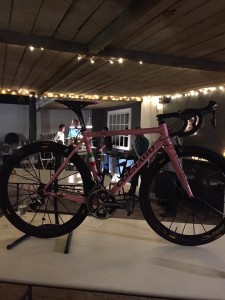 that all their wine is exported. They have owned the farm for about 25 years, and named it after a town in Surrey, which is next to Sandhurst, John explained. His son Mark has set up a cycle shop, selling the Italian brand Colnago Cycles, described as the ‘most sought-after bicycle for top cyclists world wide’. Café Pavé is named after the cobblestone road that leads to the restaurant, reminding Chefs Sidwell and 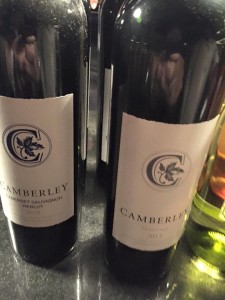 Angelique of their time spent cooking in France. We were told that the road that runs past Camberley is a favorite for cyclists and hence the idea was born to open a cycle shop, and to offer visiting cyclists a ride-in stop to eat and have a drink at. Helshoogte Pass is a favorite for Tour de France and Giro d’Italia training, and top cyclists Bernard Eisel and Ben Swift of Team Sky, as well as the Norwegian national champion have already eaten there.  Mark and the Chef Couple found each other, the latter having had a dream to open their own restaurant.

Chef Sidwell is still employed as a Chef at Silversea Cruises. 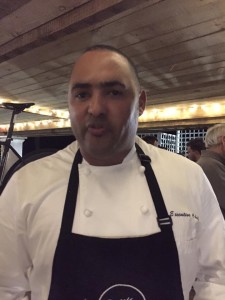 He and Angelique have traveled the world, after studying at the Institute of Culinary Arts nearby. Sidwell has worked at Ellerman House and Paranga previously, and the couple have worked in Michelin-starred restaurants, and in the USA, France, the U.K., as well as in Dubai. They wanted to do something on their own, having worked for others in the past, and set up the Café within a record eleven days. A new menu was launched last week.

It was wonderful to see Petro and Bernard Immelman at the function, Bernard being an exceptional food marketer, and was a very special client when we ran our Food PR consultancy.  He now finds and develops food entrepreneurs via a company called FinFoods. 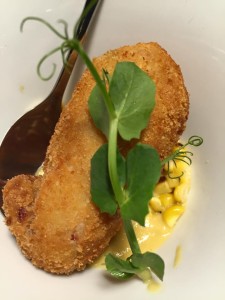 The canapes served were tastes of some dishes on the new menu, and were the rather salty hot smoked salmon, the salmon sourced from Wild Peacock, and it was nice to see Sarah Baker again; corn and chorizo croquettes served with a corn velouté; the amazing pork belly topped with crackling, served in a Calvados sauce, with butternut 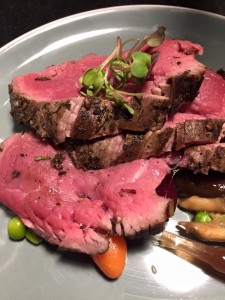 purée; and a most wonderful tender rare beef.

From what we tasted at the opening, Café Pavé promises to be a hidden gem of quality food. I will certainly go back to try out the Bistro, especially as they also offer a ‘Champagne & High Tea’ on Sundays from 15h00, at R135.