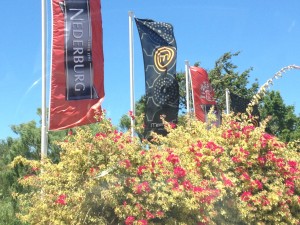 Last week I was lucky to be the only blogger to be invited by M-Net‘s PRO Ingrid Engelbrecht (right in bottom photograph) to attend a Media Day on the set of MasterChef SA at Nederburg, to obtain a behind the scenes feel for the production of one of our country’s most successful reality TV cooking shows.  It emerged that the show management is highly organised, executing the shoot for the day and planning shoots five days in advance simultaneously. MasterChef SA Season 2 will commence flighting mid-year, and will be extended to twice-weekly broadcasts of the 26 episodes.

The media group of about 25 from Johannesburg, Cape Town, and Durban watched a cooking challenge of the 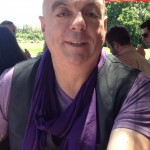 contestants from the mezzanine level. Guest house duties prevented me from getting to Nederburg so early, so unfortunately I missed out on seeing the contestants, who arrived at the MasterChef SA kitchen almost three weeks ago. 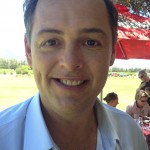 It was a delight however to see judges Pete Goffe-Wood and Benny Masekwameng again, as well as to meet Andrew Atkinson for the first time, having undergone a complete change in his appearance, and particularly in his dress. Gone are the jackets and suits, and all three the judges looked far more comfortably dressed.  It is from the judges, and later from MasterChef SA Culinary Producer Arnold Tanzer, that we heard that every dish that the contestants have to prepare is tested multiple times.

The accuracy of the recipe ingredients and method of preparation is tested by four different chefs in Chef Arnold’s test kitchen.   The dishes that are prepared by the contestants are filmed for presentation, while the judges taste an additional portion prepared by each contestant, which one does not see on screen. They then taste the filmed dishes, and provide their feedback for the camera.  Chef Pete has taken to tasting the dishes during the preparation already, to get a feel for them.  The three judges are called the ‘three stooges’, and are like brothers, much like the bonding that has taken place amongst most of the Season 1 contestants, even after the end of the season. None of the judges received any screen training, and Chef Pete said that they are no longer conscious of being filmed. They have had to learn interviewing skills however. Last year Chef Arnold and Chef Pete visited the set of MasterChef Australia for two days. The bond between the crew is strong as well, 85% having shot a number of series for M-Net in addition to Season 1.  The next season of Idols will be shot soon too. Ingrid said that her job is to ‘put a pep in everyone’s step’, and to show that ‘M-Net Cares’! She also conducts the exit interviews with the departing Pressure Test contestants.  It was super to see Lungi Nhlanhla, a MasterChef SA Season 1 Finalist, and now a journalist 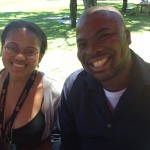 at Drum, and it was sweet to see her sit with Chef Benny, having had a special affinity with him during Season 1. Chef Pete sat at our table, and shared that the season 2 contestants are of a higher calibre, having had the benefit of watching season 1. The contestants had also attended a Chef’s School in Randburg before the festive season, at which they were taught basic kitchen skills, such as deboning chicken and filleting fish.  About half the contestants are from the northern provinces, with one or two from Durban, and the rest from Cape Town.  For the first time the contestants will also be filmed in their House, and therefore more upmarket accommodation has been selected, to share the contestants’ interaction with each other off-set, as per MasterChef Australia, giving the show more of a three-dimensional and real element.  The House contains a large collection of cook books, and last year those by guest chefs were also part of the collection, it obviously not being known by the contestants which guest chefs would surprise them on set on a given day.  Some contestants have quit their jobs, to participate in MasterChef SA.  The top finalists will be spending about 7 weeks on the MasterChef SA set in Paarl.

We were treated to a long slow lunch at The Red Table Restaurant at Nederburg, at which I had a less than 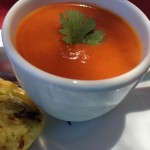 satisfactory experience just over a month ago, when it had just opened.  Chef Pete referred to the colour of the restaurant as resembling ‘Edgars Red’. The restaurant is operated independently by Dish Food & Social.  I was told that the new Restaurant Consultant Sarah Proudfoot and the German waitress that I experienced on my first visit have already left the employ of the restaurant.  An amuse bouche of tasty tomato soup was served with a pastry in an espresso cup. 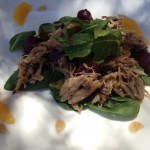 It was funny to see the NOMU sea salt and black pepper grinders on the The Red Table Restaurant table (being an independent operator they may use the ingredients they want to), with Robertsons being the sponsor of the MasterChef SA kitchen just a few meters away!  The salad of duck confit, roast baby beetroot, with orange segments, and baby spinach was perfect for the hot day.  The grilled kingklip served with fondant potato, leek, a red onion 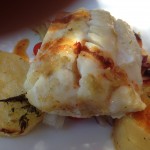 salad and chili lime dressing was a massive improvement on the kingklip which I was served on my first visit to the restaurant.  While the waiter had heard my request for the dressing to be excluded, he did not pass on the same message about the red onions!  The waiter stretched right across me to place a fork on my left, from the right!  The ‘brûléed’ lemon tart was a flop, being completely runny and 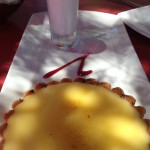 without the brûlée!  The mini strawberry milkshake it was served with was perfect.  Instead of a cappuccino, I requested an iced coffee, and it was perfectly made.

We felt sorry for the contestants and judges on the 35°C day in Paarl,  but they looked super cool.  Chef Pete shared that for Season 1 it was 48°C when they filmed in Zanzibar, and that the 50 crew and contestants drank 50 cases of water on the first day alone, given the heat and humidity.  The test on MasterChef SA is not so much the ability to cook than it is to deal with the pressure of preparing a dish against the clock, being asked questions by the judges, and having seven cameras focused on them.  Chef Pete said that the food of each contestant reflects the personality of that person.  We can look forward to seeing more cooking, and more contestant interaction in Season 2.  Editing is meticulous, with only 1 in 5000 seconds of filming used. The day is a long one on the MasterChef SA set, from 6h00 – 19h00, Mondays to Saturdays.

Chef Arnold (middle in photograph) showed us his test kitchen, and I saw rows of Robertson’s spice bottles, which they have to source 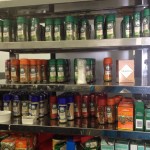 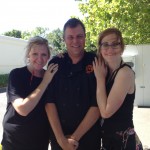 separately, as Woolworths does not stock the co-sponsor’s brand.  Bronwen Smithers is Chef Arnold’s right hand, having worked with him for 17 years already, and is Head of Pantry, being responsible for ordering produce for each day’s production.  We saw racks of oranges, lemons, limes, apples, red onions, eggs, pineapples, potatoes, and more.   She also checks that ingredients are not too freely available, to ensure that the contestants use a good variety of ingredients in their dishes. She has a policy of not freezing any of the ingredients.  Filming off-set is a particular challenge, in planning what to take along. They also need to stock the contestants’ and judges’ Houses with food. Chef Arnold said that they need to test guest chef recipes too, as ‘chefs are notorious in not spelling and writing well”. Chef Arnold said that the amateur cook contestants are really good cooks, and that there is no objective to ‘trick them’. How they handle the pressure will make the difference on their way forward.  The fruit and vegetables last for three to four days, and what is left over and still edible is collected by the Valcare Trust, which distributes the food to a list of worthy charities in Paarl.  The contestants are taught to be responsible in their ingredient selection from the Woolworths Pantry on set, so that the minimum goes to waste.  We met Candice Tennant, the Series Producer, who co-ordinates the smooth running of all aspects of filming MasterChef SA (left in above photograph).

We spoke about MasterChef SA Chef Season 1 winner Deena Naidoo’s Aarya restaurant at Montecasino, and how busy it has been.  Season 1 Finalist Brandon Law is now working for Deena in the Aarya kitchen.

We finished off the day in the Nederburg tasting centre, and my eye caught the new Nederburg pay-off line in 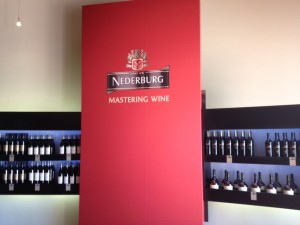 I was initially invited to attend a blogger day, but the invitation was switched to the Media Day in the last minute, as the ‘amount of bloggers originally short listed was way too many to accommodate in the episode. As such, we had to notify  almost half the list that we would no longer be needing their presence at the shoot. Of all the bloggers sadly struck from the list, you are the only person to whom we extended an invitation to the Media Day tomorrow’, wrote Ms Engelbrecht.  Andy Fenner must have been invited too, and then uninvited, if his Tweet of 11 January refers to MasterChef SA: ‘I get invited to be on a local TV food show, I ask about provenance of the meat. I get uninvited’!

2 replies on “MasterChef South Africa cooking up an exciting Season 2!”