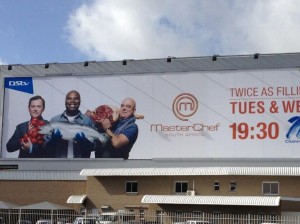 No matter what happens in the MasterChef SA Season Finale tomorrow evening, the choice of the Season 2 Masterchef SA winner will be controversial, if the outcry on Social Media about Kamini Pather being allowed through to Top 4 and Top 3 is anything to go by, even forcing M-Net to issue a media release about it!

Food blogger Kamini Pather was the clear leader until episode 24, rarely putting a foot wrong,  and only landing up in two Pressure Tests.  It is clear that her strength is creatively meeting cooking challenges, and that she is less good in having to replicate dishes of visiting chefs, which was her downfall in two episodes last week.  She is seen to be aloof, some seeing this as arrogance.  She was a winner of the bell, and Food and Wine Pairing Master Class at Nederburg, for the best Signature Sandwich in episode 5.  She was the joint winner with Tiron Eloff of the Coffee Invention Test in Ethiopia 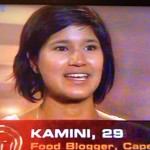 and received a MasterClass in the Jemma Valley. Went into her first (Vegetarian) Pressure Test due to the injera challenge in Ethiopia in episode 21. Into the Pressure Test in episode 24 for her poor month-end dish.  Poor performance in Gâteau Pressure Test, yet was (controversially) saved by the judges in episode 25.   Poor performance in Richard Carstens’ Chocolate Handkerchief dish in episode 26, yet was saved again. In a video interview after episode 26 a very tearful Kamini admits that her early morning yoga is ‘working less and less’, and that ‘the volume of tasks’ required when replicating dishes ‘is freaking me out’.  She has the highest number of votes from readers of our blog.

Sisters Landri and Seline van der Wat have won increasing viewer support, for their wonderful supportive relationship, for being smart, for their cooking skills (Seline for baking in particular), for how well-spoken they are, in often making commentary to the viewers in summing up special happenings, for being pretty, and for their warmth and support of the other contestants. 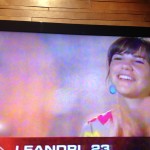 Seline has been in three Pressure Tests, but has had an amazing ability to bounce back when she has appeared to be at rock bottom! Into Pressure Test in episode 6. 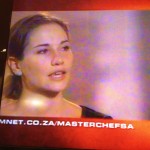 Leandri did so well in episode 26 in replicating Chef Richard Carstens’ Chocolate Handkerchief that she shot into the Finale for episode 28 on Wednesday evening. Seline will face Kamini in the cook out tonight, having to replicate a dish of The Test Kitchen Chef Luke Dale-Roberts, which Kamini may be weaker at again, disliking following recipes.

Going back to the MasterChef SA Facebook page, it is unbelievable to see how many negative comments are still being posted about Kamini having been allowed to progress into episodes 26 and 27, when she performed so poorly. Kamini is berated for not showing her passion for cooking (she has expressed that she wants to go into food media), that the program has ‘match fixing‘ and should now be called ‘MasterFix‘, a commentator even suggesting that the judges should read all the negative Facebook comments, not understanding that the filming was completed in March already!  Highly respected food blogger and radio presenter Nina Timm expressed herself strongly on the Facebook page in response to the media release which M-Net published in reaction to all the negative comments, 95 since the media release was posted on the Facebook page three days ago: ‘difficult to swallow this bull! For me it is not a personal issue, but rather a fail series! But while we are all debating and arguing the series gets publicity good or bad, it still is publicity’!  On Twitter the MasterChef SA stream is equally negative, the word ‘rigged‘ being mentioned regularly. It appears that many of the viewers would love to see a duel between the two sisters in the Finale.  One must commend M-Net for keeping the Facebook page open and for allowing all the negative comments, unlike Woolworths which closed its Facebook page for a couple of days last year when it was accused of racism in an employment advertisement. This is what M-Net issued as its media release:

‘As MasterChef South Africa starts to draw to a close, the competition is fiercer than ever. How do the Judges make the difficult decisions about who goes home, such as in this week’s back-to-back Pressure Tests?

The Pressure Test dish in Episode 26 (Wednesday, 4 September) was the most difficult and technically complex dish to date in the MasterChef competition. Chef Richard Carstens presented a dessert dish that had a number of elements on the same plate, and the Contestants had to replicate this dish as closely as possible, working from the same recipe.

According to MasterChef Judge Pete Goffe-Wood, tasting a dish of this nature requires specific judging procedures: “Judging plates with multiple elements, we have to assign a relative value to each of those elements i.e. their importance to the overall effect of the dish. It’s not simply a question of which contestant had the most elements correct, as some of those elements may just be garnish and not integral to the dish. It’s a question of having the core elements completed, and completed skillfully.” It was based on these criteria that the Judges unanimously decided that it was Ozzy’s turn to hang up his apron on Wednesday.

The MasterChef South Africa Judges are assigned their role in the series due to their professional expertise in the culinary field. For Pressure Tests, they are joined by special Guest Chefs – neutral figures and culinary experts – whose decisions are weighted evenly in the process of deciding who to eliminate.

Says Goffe-Wood, “We all believed, Richard Carstens included, that Kamini’s plate was a better replication of the most important elements on Richard’s challenging dish. In order for the competition to be fair we only ever judge the plate in front of us – no consideration is ever given to past performances. What makes MasterChef such a nail biting series is that Contestants live and die by their food on the day. We’ve emphasised this point throughout both Seasons. It was the toughest decision we’ve had to make so far, but with so few Contestants left, the margins for error become smaller and smaller.”

M-Net is in for a viewer outcry if Kamini is selected as the winner, which is the majority view, even if Leandri is quickly catching up as a winner favourite.   Having had a controversial Season 1 with the Restaurant prize being deemed to have been misleading, a controversial Season 2 winner outcome will not win M-Net any viewers for Season 3, which has been confirmed to be filmed later this year.

POSTSCRIPT 10/9:  Gordon Ramsay was rumoured to be part of Season 2.  That would leave tomorrow’s last episode for his appearance!

POSTSCRIPT 12/9:  This MasterChef SA blogpost has attracted the most unbelievable readership, with close to 1000 unique readers today, the most read of all our MasterChef SA Season 2 stories.

POSTSCRIPT 14/9:  In an interview with Beeld, Kamini has admitted to knowing Chef Pete before MasterChef SA Season 2.  On her previous blog Deelishus she writes that she attended at least two courses at Chef Liam Tomlin’s Chef’s Warehouse and Cookery School, one in Cape Town and one in Franschhoek.

13 replies on “MasterChef SA Season 2 controversial final week: what lies ahead in episodes 27 and 28?”