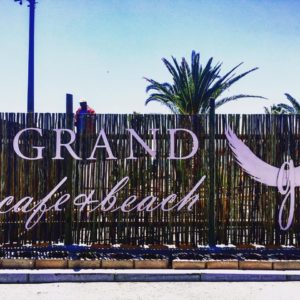 After a few weeks of closure for a complete renovation and expansion of its facilities, the Grand Café & Beach has re-opened, ready for the summer season lying ahead. Yesterday a number of writers was invited by Manley Communications to experience the Grand, on a perfect sunny summer beach day.

The Grand on the Beach, as the Granger Bay property was known, was opened seven 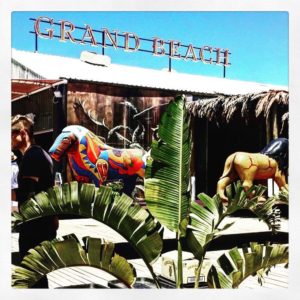 years ago, by owner Suzie Main.  It was the first private beach created alongside the ocean in Cape Town, and attracted custom immediately for its South Easter protected location alongside the V&A Waterfront. The restaurant was a sister restaurant to the Grand Camps Bay, and the Grand Cafe & Rooms in Plettenberg Bay, both of which had opened prior to the Grand on the Beach. Earlier this year it was announced that the Harbour House Group, driven by founder Michael Townsend, had taken over the Camps Bay property, which will be turned into a La Parada shortly, and that it had bought 70% of the Granger Bay property, with Ms Main retaining 30% ownership. She was present yesterday, and I was told that she is there almost daily. 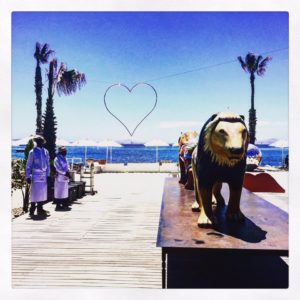 As one drives into the parking area, one notes the changes immediately, the division of the parking into two sections having been removed and most of the parking area having been tarred. An opportunistic assistant came to sell me his car wash service. I parked near the original entrance, not realizing that this has changed, the entrance signage being affixed to a reed fence. The name has changed to GRAND Café & Beach. As one enters one walks towards the beach, one can sit at tables on both sides of the deck walkway. The exterior area has been tightened up in its design, with a new bar area on the left, and a larger seating area to the right, called The Secret Courtyard by Spier, with its own bar facility, and can seat 30 persons. 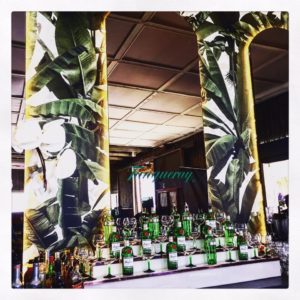 As one enters the restaurant building the section which once housed the shop has been turned into the Grand Tanqueray Café Society Bar, the mirrors in this section being branded with the gin brand, and the walls between the mirrors covered in decadent palm motif wallpaper. It can be rented as a dedicated function venue, and has a piano and fireplace. It has a raised seating area, allowing one to enjoy an excellent sea view. Up to eighty persons can fit into the space for a cocktail style 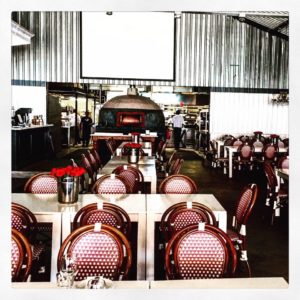 The main restaurant section looks the most familiar, seating 180 persons, and 600 cocktail style. The Absolut Elyx bar was completely redone, in a charcoal wood base and white marble top.  Corrugated iron doors which hid the kitchen have been removed, revealing the pizza oven, and the sliding doors on the beach side have been retained but have been fitted with glass, so that one can see the ocean when the doors are closed due to wind or cold. The kitchen team is headed by Chef Dominique Faict, who worked at both Asoka and Kloof Street House.

Containers which were on the beach previously have been lifted, cladded, and a 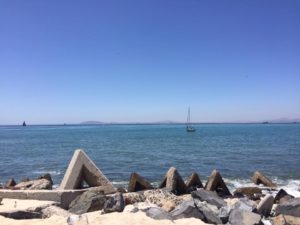 deck added, with tables and chairs, dedicated to a SA Breweries beer brand, and a Pongracz bubbly bar alongside. The beach area itself can seat 600 persons, increasing to 750, we were told by Brand Manager Radley Duijkers, who is a new addition to the Grand team, having worked at Kloof Street House and Asoka previously. This is where we enjoyed our lunch yesterday, sitting at white wooden tables, and café style chairs in woven cane, painted white. The setting is unbelievable, near the water’s edge, with dolosse preventing one from jumping into the sea for a swim. A separate Grand VIP Beach can accommodate 140 persons seated and 250 standing. A DJ booth and a beach dance floor caters for parties, with two bars, and Café Delmar style music will be played in this area. A VIP ocean-facing deck can seat 8 – 12 persons, and is geared for small celebrations. For events of a certain size the Grand must be booked out by the party booking an event, for sole use. In total the venue can hold 870 persons seated and 1050 standing, probably making it the largest restaurant in Cape Town. During the course of our lunch we were 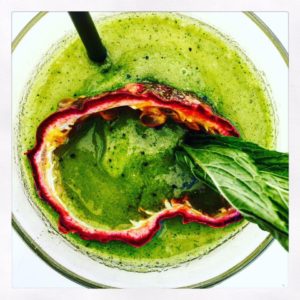 aware of the venue being set up for an event later in the evening, which was booked exclusively.

On arrival we received a Havana Anege cocktail, a striking green drink which was made with Malibu rum, coconut syrup, passion fruit pips and  juice, mint, and ice. Bottled water was available, and specially branded Grand Rosé and Sauvignon Blanc wines were poured, and kept cool in ice buckets. We kicked off our shoes, and 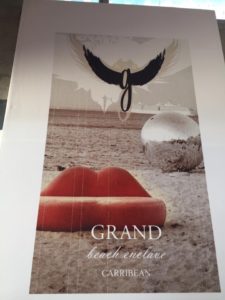 enjoyed the feel of the sea sand, work feeling like a distant reality!

A number of starter dishes were brought to the table, including three rectangular pizzas (Parma ham, rocket, and tomato, at R110/R215; roasted sundried tomato, aubergine, and tzatziki, at R110/R215; and a decadent seafood pizza at R260/R380 – photograph), which were shared amongst the twelve of us at the table. Other starter dishes which arrived at the table were calamari served with aioli and salsa verde (R85), tempura prawns served with chipotle mayo and a yuzu and soy dressing (R115), a salmon salad (R180), a 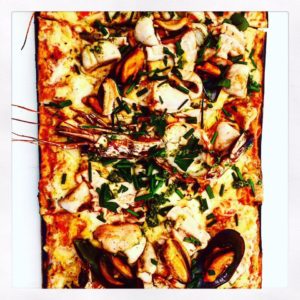 Mediterranean board at R45/R75 (with hummus, tzatziki, pita bread, a Greek salad, and halloumi), and a Greek salad R65). I love calamari so much that I had it grilled as a starter as well as a main course (R190).

We were given the menu, and could select a main course and a dessert from it. 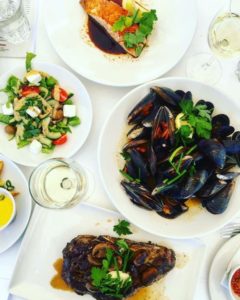 Amy Hopkins sitting next to me ordered a 600g Chalmar sirloin on the bone, to share between three of us, with Illse Nel, served with the most delicious sautéed mushrooms, caper butter, and a black truffle sauce (R285). I photographed the main courses of the other guests, including 600 gram of fresh mussels (R220); seared salmon with sugar and soy sauce; and grilled prawns (R220). The slow-roasted Karoo lamb was sold out. Amy took a lovely photograph of a number of the main course 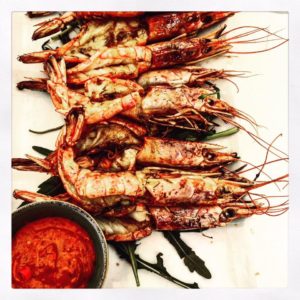 dishes, and I requested her permission to use the photograph.

We were invited to order desserts from the menu too, and my eye caught the Pavlova, beautifully presented, with meringue, cream, ice cream, and a selection of berries.  Illse ordered a cheesecake with a caramel 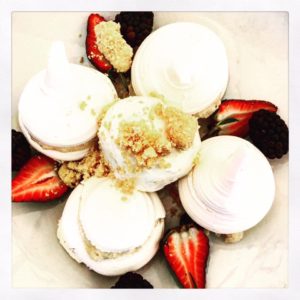 We found it very hard to leave, it being such a perfect day, and being spoilt with excellent food, and good service from the waiters.  We felt completely relaxed. We had fascinating conversations at our end of the table, covering love, divorce, yoga, life, and dancing, leading to lots of laughter! We were served coffee, and I had a second cappuccino when Aubrey Ngcungama popped in at the tail-end of the lunch.