The Sweet Service Award goes to Eso juice bar in the Cape Quarter, and its owner Ahmed for his service recovery.  I had ordered a freshly squeezed orange juice, costing R30.  I asked for a serviette, but was told by the two staff members that they had run out of them, and had been out of stock for a number of days.  I felt that the owner should know, but the staff initially refused to provide his details.  The more senior of the two staff ignored my questions, just walking away from me.  The owner was shocked when I told him what had happened, and asked me where I was heading.  He immediately sent one of the two staff with R30 cash, as well as a voucher, to Palladium, where I was, as a make-good for the poor service. 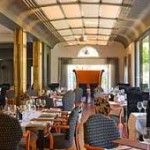 The Sour Service Award goes to Myoga, which has appointed a most irritating Social Media person, who believes that 20 Tweets per hour or more, every minute or so, is what will send droves of patrons to the restaurant.  However, the bulk of the Tweets are inane conversations with other Tweeters, completely unrelated to the restaurant, and it was irritating that he was involving himself in my Twitter conversations too. I called owner Mike Bassett, leaving a request for him to call me about his Twitter account, as it was clear that he had no clue as to what was being put out in his restaurant’s name.  His accountant called me back immediately, asking me to send the invoice again, a lost in translation moment!  Mike did call back, and seemed disinterested in the feedback, clearly not getting Twitter at all.  He should see the movie ‘Chef‘!

POSTSCRIPT 19/8:  It is surprising that Myoga would allow its Social Media company Concept101, with MD Grant Fourie, to disparage this blog and ourselves via comments below, on Twitter, as well as telephonically, in anger for receiving the Sour Service Award!  The comments from him that we have allowed, out of the eight that we received from him, the balance having been deleted for their defamatory nature, can be seen in the Comments section to this blogpost.

Thank you No Expectation Travellers for posting a

Thank you Sandra Keet for your wonderful 5/5 revie