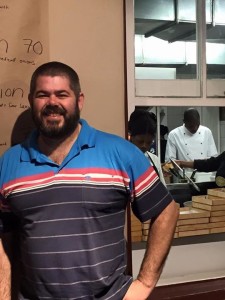 A year after opening at Stellenbosch Vineyards, Bistro 13 has opened as a pop-up restaurant at De Warenmarkt in Stellenbosch, called Hands On Street Food by Nic van Wyk.

I popped in at De Warenmarkt yesterday, and was lucky to find owner a chef Nic van Wyk in attendance. He motivated their three-month presence at the trendy new Deli/retail outlet/restaurant space as an opportunity to offer employment to former staff members who approached him for a job, but which he can not accommodate at his Bistro 13. He has given
the staff at the pop-up a three-month contract. Chef Nic follows in the footsteps of  Chef George Jardine, who opened up with De Warenmarkt in July as its first pop-up. Chef Nic helped plan the pop-up at De Warenmarkt when it first opened.

The menu is casually written on a paper sheet behind the payment counter, but A5 copies of it is also available. Some menu items may change over time. I tried the delicious Lucky 13 hamburger, a sesame seed bun with a 200g beef patty (no doubt from Ryan Boon, who has a fully-fledged butchery in-house at De Warenmarkt), aioli, rocket, 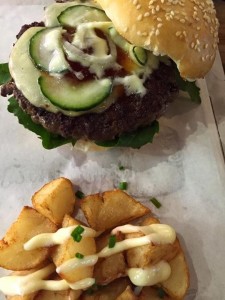 smoked mozzarella, tomato jam, pickled cucumber, and crispy beef fat potato chips (R85). Chef Nic commented on me eating it with a knife and fork, and I told him that juice normally oozes out of a hamburger, but I could well have eaten it by hand, as this did not apply to Chef Nic’s hamburger. Chef Nic told me that The Asian Equation is equally popular, a five-spice and honey pork belly, with a crunchy vegetable salad and sweet and sour dressing (R70). Other options are North meets South lamb Boerewors roll (R70), Gimme Wings roasted curry chicken wings (R75), Hail Caesar salad (R70), Not Nachos potato skins and avocado (R60), Eight Sexy Legs fried calamari steak (R75), and Roundhouse Classic, with new steak, egg, and chips (R130). Platters of bread (Mano’s Bakery), charcuterie (Ryan 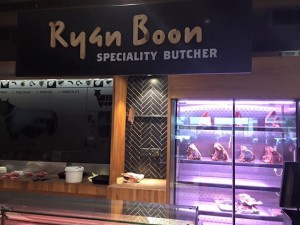 Boon), and cheeses (Around Cheese) are also available, suppliers also having stands in De Warenmarkt.

Chef Nic said that he will be at De Warenmarkt in the mornings, overseeing the lunch prep, before heading to his Bistro 13 restaurant. He has interns at Bistro 13, and a Sous Chef looking after the kitchen at De Warenmarkt.

Since visiting De Warenmarkt when it first opened in July, a new stand for Juice Revolution has opened. The fresh vegetables looked sad, and the supply availability reduced. Service at the till to pay for the Deli items was frustratingly slow and unprofessional!

Chef Nic first attracted attention when he and Chef Michael Broughton opened Terroir at Kleine Zalze eleven years ago. Their paths separated, Chef Nic becoming a judge of Kokkedoor, and opening at Diemersdal Farm Eatery in Durbanville. From there he moved to the historic Welmoed wine farm at Stellenbosch Vineyards, to open the brand new Bistro 13 a year ago. To date they have served 16000 guests. The new Bistro 13 Summer menu includes smoked mackerel salad with pickled fennel and chorizo, roasted asparagus and truffle hollandaise; cumin roasted pork belly with remoulade and salsa verde potatoes; roast pork chop with a stuffed potato and brussels sprouts; steak tartare; Asian-inspired tuna tartare; and three chocolate terrine and rum baba with sultana ice cream.

‘We’re grateful to have learnt so much from these guests. We are fortunate that they are constantly helping us to improve and that we have genuinely built remarkable relationships with guests, we now fondly refer to as our locals. In this industry, customers and their insights are priceless‘, says Roxy Laker, responsible for Marketing and PR at Bistro 13.  ‘Our goal remains the same to innovate and build relationships. We want to people to create moments with us, with great food, wine and friends. We want to be excellent at what we do. Every day’, concluded Chef Nic.