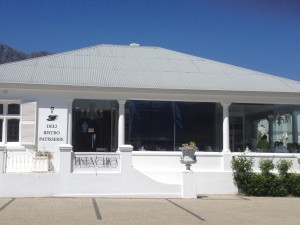 Pistachio has existed as a decor outlet in Franschhoek for a number of years, first at the top end of  Huguenot Road, and then lower down the main road when it moved into Place Vendome Lifestyle Centre at the entrance to town.  Recently it opened up as Pistachio Bistro, in which no pistachios are used at all, and which does not appear to have anyone qualified to cook!  Pistachio Bistro is a total failure in more ways than one.

I have been a past customer of Pistachio, having bought cushions for my couches, and should have known that service would not be their strength, as an order for additional cushions was never received!  Two months ago a Tweet alerted me to the transformation of the decor shop into a Bistro, and I decided to pop in.  Little had 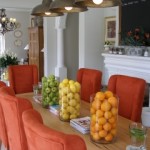 changed inside Pistachio, the sales/payment desk still being at the entrance, the staff are still the same, and all that had changed was that a few tables for seating had been added, as had a longer table with a selection of cakes and small treats, for which there should be a good demand, given that good cake is scarce in Franschhoek.

I took some photographs of the interior, admired the 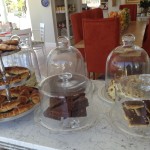 sweet treats, and then chose a table outside to enjoy the good weather day.  I ordered a salmon dish and a cappuccino, and the waitress returned to my table, bringing the cappuccino and telling me that I should enjoy my cappuccino with their compliments, and then leave the restaurant, as they would not serve the salmon dish.  I was shocked at the feedback, and did not understand it, asking her to call the owner from whom the message originated, she said.

Bradley Tyler, with his partner Peter Hager, owns Pistachio Bistro, and they also own Re/Max Prestige Country Properties in Franschhoek, having been estate agents here for many years.  They developed Place Vendome and sold the individual shops in the centre, selling well in its hey day, but an increasing number of businesses have closed down, leaving empty shops in a centre that looks attractive from the outside, but has become a white elephant, as neither locals nor tourists stop there.  Bradley came storming to my table, attacking me from the outset, saying that he did not want me to review the Bistro, as I never have anything nice to say in any review, and that he would rather have me Tweet that he had asked me to leave than to receive a bad review.  I complimented him on what I had seen so far, and that I had no intention of writing anything negative if it was not justified.  He insisted that I enjoy the coffee with their compliments (I left the money for it on the table), and then leave, which is what I did.  I did not Tweet about the incident, as I was determined to try the restaurant, intrigued by Bradley’s defensiveness, which signalled that he was not confident about the quality of his fare! 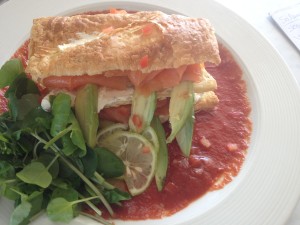 Bradley was right – the food is dreadful! With some smart planning, I was able to see and taste the same salmon dish I had ordered two months ago, and which they had originally refused to serve.  It took 40 minutes for the dish to be served, despite the Bistro not looking very busy, and it being after the lunchtime rush.  The dish sounded interesting,  but was overdone in promising layers of smoked salmon and avocado (the avo was not layered – they were only small pieces on the side), and sour cream and chives (there were no chives to be tasted), which ‘floated’ (description from the menu, and not too inaccurate) in a sea of thick tomato paste instead of the promised tomato vinaigrette (R65).  I felt nauseous for three hours after eating this dish, the tomato paste dominating the dish as well as the taste in my mouth.  Tweeting this, the response included ‘Oooh ouch‘ from a Restaurant Manager, as well as ‘S..t! That looks wrong in so many ways‘, from a chef!

The menu as well as flag/banners on the main road promise lunch and dinner, but I was told that because they had not attracted a single guest when they had opened for dinner, they have decided to stick with lunch only.  It’s a shame that they haven’t amended their marketing material.  Many of the dishes on the menu sound heavy, clearly intended for dinners, and far too heavy to be enjoyed for lunches. The twice baked Gruyere soufflé is said to be good (R48), but some of the other dishes sound odd, such as ‘oven roasted chicken with honey and Dijon mustard sandwich served on crisp Panini’ (a sandwich on a Panini?!) at R75; the home made beef burger is ‘flavored (sic) with Parmesan’ (R80); ‘Lamb curry bunny chow served in a home made ‘pot brood‘ (sic), costing R85;  beef fillet served with steamed asparagus (R120), which are not in season any more; and the ‘highlight’ being the ‘chilli beef wrap with mushrooms, cheese and a tsatsiki (sic) sauce…’ (R85).

I noted a predominance of Graham Beck wines on the small winelist, and was surprised at the association of their top class wine brand with Pistachio Bistro, offering such poor food and poor service!

Pistachio Bistro is unlikely to survive, probably returning to its decor origin. The decor shop had been advertised for sale at R295000 for some time already. Looking for the contact details of Pistachio Bistro for this review last night, I found an advertisement for it, it also being for sale, but now at R950000!   If Bradley was a distasteful and rude character in his Bistro, his blatant estate agent lies should be reported as misleading advertising (underlined below), in claiming:

*   ‘…establishing itself as a destination of choice‘ (there is not a single review yet!)

*   ‘...opportunity exists to expand the business to encompass the highly lucrative dinner trade...’

The menu composition of Pistachio Bistro is probably the ‘creation’ of the owners, who have no chef’ qualification, and have created the most bizarre combinations of ingredients for the dishes on their menu!  Being so rude and asking customers to leave without reason does not auger well for a new Bistro business, Bradley receiving exactly what he asked for! 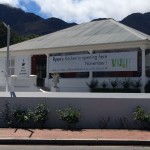 POSTSCRIPT 6/10:  It was predictable that this restaurant and decor business would close down, with such a despicable attitude of the co-owner Bradley.  The space will be taken over by Ryan’s Kitchen from November.

Request: If you like our blog, please would you vote for it for the SA Blog Awards?    Thank you.

6 replies on “Restaurant Review: There are no pistachios at Pistachio Bistro in Franschhoek, review wish comes true!”

#agapanthus are back #campsbay #capetown