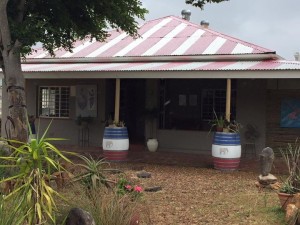 It never fails to astound me how much changes regularly in Franschhoek as far as restaurants are concerned. I had heard some time ago that Reuben’s Chef Reuben Riffel will not renew his lease next year, and yesterday I was shown the building that he is said to have bought (above).

Reuben’s Franschhoek opened in 2004, just three months before we opened our former Whale Cottage Franschhoek, around the corner and two blocks up. The building housing the restaurant has an excellent location on the main road, with lots of parking behind it, and was diagonally across the road from Le Quartier Français, much to the irritation of its former owner Susan Huxter, especially when Reuben’s was crowned as top Eat Out restaurant just six months after opening, and performing strongly on the Eat Out Top 10 Restaurant list for another two years thereafter. The building was bought by Marc Kent and Tim Rands of Boekenhoutskloof, and they became partners in Reuben’s, inviting Chef Reuben to return from the UK and to open his own restaurant with naming rights.

When Chef Reuben was enticed to open Reuben’s at the Only&Only Cape Town, he must have received an incentive from Sol Kerzner, with which he could buy out his two partners, and became a tenant in the Franschhoek building.

A month ago I heard that Chef Reuben had decided to not renew his lease (or could it have been the other way around?), so I contacted him to confirm this. He did, and told me that he would let me know when the acquisition of a new building has been confirmed. I have not heard from him since then, but the village is rife with the news that Chef Reuben has bought a building on Reservoir Road just off the main road, currently used for residential purposes. It is close to the Franschhoek Boutique Hotel and Allora restaurant, and faces the side of the square in which Essence coffee shop is based. It looks very spacious from outside. 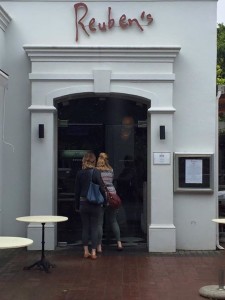 Store will go into the current Reuben’s space, catering to a village that already has two Pick ‘n Pays!

The information contained in this Blogpost comes from reliable sources, is duplicated by more than one person, but has not been confirmed by Chef Reuben nor with Marc Kent. When we receive the confirmation, we will add a postscript to the blogpost. The Reuben’s Franschhoek lease should run until mid-2016. Having a look yesterday, I noted that they have trimmed the vine trellis, and that they are repainting the building, signs of the new beginning? The new Reuben’s restaurant building will need a major renovation too, but it still has ample time.

POSTSCRIPT 2/11: It has been confirmed with the estate agent and the owner of the building that it has been bought by Chef Reuben Riffel.