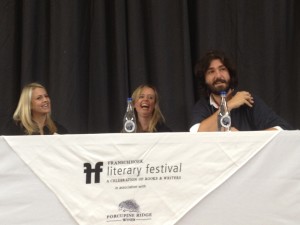 The Franschhoek Literary Festival has never viewed Social Media as a serious literary genre, and its token recognition of writing on Blogs, Twitter, Facebook, and Instagram is reflected in the event’s poor use of the medium to communicate with its audience of attendees and potential future visitors.  It is a shame that the two Social Media sessions overlapped so much, much of what was said on Friday being repeated on Saturday, not surprising in that two of the three speakers were the same persons.

Friday’s session was one of the Festival opening events, and was not as well attended as one would have thought, but the starting time may have been too early.  The target audience was not well planned, a large collection of learners having been expected, which did not materialise. The session was entitled ‘Beware: Social Media Ahead’, and media lawyer Emma Sadleir from Johannesburg was interviewed by panel chairman and Daily Maverick journalist Rebecca 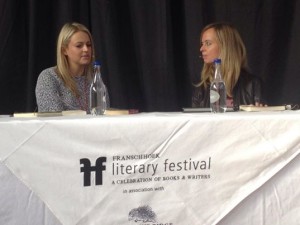 Davis.  Emma’s book ‘Don’t film yourself having sex and other legal advice for the age of Social Media‘ formed the basis of the one-hour discussion.  Emma is an excellent communicator, quoting local and international Social Media cases, clearly well-versed and experienced in the topic.  Having done her articles and specialised in Media Law at Webber Wentzel, she now runs her own legal firm specialising in the topic. She became particularly well-known during the Oscar trial, having a slot on the Oscar channel, answering viewers’ questions which had been received on Social Media channels. It became an educational tool for listeners, she said. However, she herself received rape and death threats from the ‘Pistorians‘, as she called the Oscar supporters, demonstrating the ‘dark side of the internet’.  The subject matter gripped the nation. It is clear that she has represented Zapiro, and is used regularly at The Daily Maverick for training before new journalists are allowed to publish their articles.

She described Social Media as a permanent public platform, and one is as liable in what one writes as one is if the article appears on the front page of the newspaper. Provisos that one Tweets in one’s personal capacity, and that views expressed are one’s own hold no legal power.  She said that on Social Media users seem to think that it is a different world, and they act differently in it. It may be the facelessness online that brings out a different personality. Emma told horror stories of rants with a racial slant, for example, on a private Facebook page being found by a ‘digital vigilante’, and this being reported to the employer of the ranter, often leading to the staff member being fired. She told a horror story of ‘Miss K‘, to whom the book is dedicated, whose ex-boyfriend had posted an explicit video of them on porn sharing sites once they had broken up. Had she sued the ex it would have attracted publicity and more viewers of the video, which she did not want, and she did not want her parents to know about it. Emma’s advice to her was to change her name and surname, and e-mail address, thus taking on a new persona.  Miss K’s first page on Google, after her Facebook and LinkedIn links, was filled up with the porn sharing site links, which meant that she would have had no future opportunity to be appointed elsewhere in the world.

One to one communication, such as a What’s App message or photograph, can go viral when the recipient passes on the message. One is legally liable for the consequences of such communication, despite one intending it to be sent to one person only. Even if deleted soon after, a screen shot taken can cause extreme legal harm.   Retweeting a defamatory Tweet opens one up to legal action.  She referred to ‘public shaming’, and the effect it can have on one’s future employment. Often the damage is done when clients approach Emma.  ‘Once it has gone wrong, there is little one can do.  The more you do, the more visible it becomes to others’.

Children have legal capacity from 14 years onwards. Emma speaks at many schools, to warn learners, their teachers, and parents about the dangers of Social Media, and that they too are liable in the case of inappropriate Tweets and Facebook, potentially costing one being expelled from the school, paying defamation claims or doing hours of community service, and not being made a prefect. Parents should check their children’s Social Media usage on their phones, to control that it is appropriate, as they could be liable too.

The newish Protection of Harassment Act is very powerful, which allows one to get a protection order against a troll. Emma recommended that everyone should Google themselves, and institute a Google Alert for one’s name.  She also warned about intellectual property, it not being cool to take content and photographs off Google, saying that ‘online is not a free for all‘!  She recommended that a Facebook take-down request should be written on the basis of an intellectual property dispute, upon which Facebook will act.  Emma said that Facebook is opening an office in South Africa soon, so it will be interesting to see how it reacts to complaints.  Currently Google, Facebook, and Twitter are based in the USA, and one can only engage with them legally in that country.

We like that Emma called for the prevention of anonymity on Social Media. She referred to the Google Right to Forget option open to residents living in Europe, in removing negative search results, but is not perfect as Google will offer results via Google.com.  She warned that having free gmail accounts means that Google can read all one’s gmail messages, and can send one ads that link to what one has written about. Google remembers what one has Googled in the past, and Google searches on two different computers can lead to different Google pages about a person or topic as a result.  Internationally media houses are closing their Comments facility, or are moderating comments before publishing them, as they are liable for any defamatory comments written by readers. Instagram belongs to Facebook now, and every photograph posted on the medium belongs to the company!

Saturday’s session ‘When Twitter Bites’ was chaired by Tom Eaton, but he added very little meaningful content, and it was also dominated by Emma.  Focusing on Twitter, it was described as a powerful tool with breaking news, but is un-mediated. It gives everyone a voice, both positive and negative!  Tweeters were urged to apologise if they have Tweeted inappropriately, and then delete the offending Tweet.  Emma raised the question as to who Twitter followers belong to, referring to former FNB CEO Michael Jordaan, who took his Twitter followers with him when he left the bank.  She asked if Social Media has become a commodity.

Rebecca Davis gave little of herself in both sessions, and reminded me of a much younger Jani Allan, who can give ‘bek’ in writing but is quite inhibited and reserved in speaking, Rebecca blushing many times, demonstrating her lack of confidence.  It is ironic that she sat on panels relating to the dangers of Social Media when she herself writes defamatory Tweets about people she has never met, including ourselves! An ironic question she asked was if there should be some ‘borderline punishment of inappropriate Tweets’.  Rebecca said that she blocks Twitter accounts that troll her. Tom said that Twitter is a platform of ‘outrage, on which one is ‘stomping one’s foot’.

The Franschhoek Literary Festival has not embraced Social Media at all, paying lip service to the topic in its programme, and in its use (or lack of) for the Festival communication.  The @FranLitFest Twitter account has 1433 followers.  They did not Tweet yesterday, and only once on Saturday and once on Friday, a total of two Tweets over the three-day Franschhoek Literary Festival, with over 100 sessions and speakers! Their Facebook performance was even more appalling, with intermittent posts, mainly to announce the cancelled appearances of top stars of the Festival, including Jonny Steinberg, Margaret Poland, Zelda la Grange, and Western Cape Minister of Education Debbie Schäfer.

Emma Sadleir knows her Social Media oats, and did her best to frighten the audience, and parents in particular, about the consequences of the irresponsible use of Social Media.  She outshone her two ‘colleagues’ on the panels, in her confident and eloquent ability to share important information!