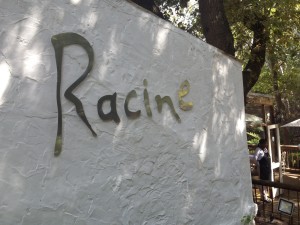 I met with Chef Reuben Riffel in December, for a coffee date at Crisp.  I spoke to him about going to Racine, his second restaurant in Franschhoek which he opened two years ago, and he requested that he accompany me to Racine. Last Thursday our diaries both had a lunch opening, and we met for what was an early but long lunch.

He told me that the idea of the second restaurant arose when Chamonix wine estate owner Chris Hellinger ate at Reuben’s Franschhoek, and suggested that Chef Reuben take over what was already a vacant 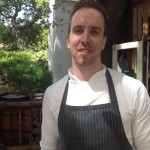 restaurant, after the owners of the former Mon Plaisir had left.  The rental offer by Mr Hellinger was a very generous one, and Chef Nico Pretorius working with Chef Reuben at the One&Only Cape Town was looking for growth, so Chef Reuben signed the lease and offered Chef Nico the job two years ago.  I met Chef Nico when I arrived, and he seems very quiet and introverted, not returning to our table during our three-hour lunch.

Having only been to Racine once before, I had not noticed that Racine has its own entrance, 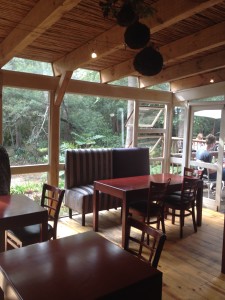 alongside the tasting room, to a wooden deck outside on good weather days, or inside when it gets colder, with a fireplace.  The restaurant has a green and earthy feel, being at the edge of what looks like a beech forest, with a tree trunk growing into the restaurant.  Wood dominates in the restaurant, in the bar counter, and the tables and chairs.  On shelves inside boxes of cactus plants add greenery, as do plant holders hanging from the ceiling inside, although they look small in relation 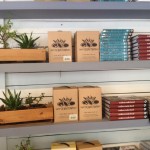 to the size of the restaurant interior. Chef Reuben’s cookbooks are on the shelves, available for sale. Branding is not visible on arrival when entering the building from the Tasting Room entrance, but is on the side of the building when one uses the Racine entrance.  The typeface used for Racine is the same as that used for the Reuben’s retaurants.

Chef Reuben told me that he had chosen the Racine name, looking for a word that would describe Chamonix as the restaurant in which he had planted his first roots in the restaurant industry almost 20 years ago, working with Chef Christophe Dehosse at that time, his first kitchen job being to prepare chickens for the rotisserie, even though it was not part of his job description as a waiter at the restaurant at that time.  His mom worked in the kitchen, and had already stimulated her family’s palate with some of the leftovers she would bring home.  It is here that he met Chef Richard Carstens, who took over from Chef Christophe, and with a sudden departure of Chef Richard, Chef Reuben took over the kitchen at Chamonix, the restaurant then still operating across the road from the now very old-fashioned Chamonix tasting room, which has not changed at all!  ‘Racine’ means roots in French, matching Chamonix’s French name.

After a very busy year last year, with his first appearance on MasterChef SA, both in Season 3 and on Celebrity Chef, 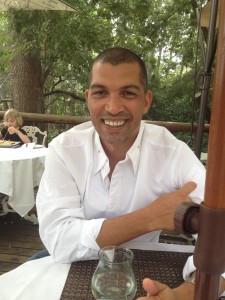 as well as a series for Samsung, as well as ambassadorships for Samsung, Robertsons, and Fairtrade (we did not get to complete the list, talking so much!), and turning 40 in December, Chef Reuben decided to take it easier this year, laughing when we described this as Chef Reuben’s ‘load-shedding’!  Chef Reuben is approached regularly to put his name to brands and events, and I sense that it has been hard for him to say ‘no’ in the past, but that his ‘load-shedding’ will include using this word more often.  He praised his wife Maryke, whom he called his ‘right hand man’, representing him in respect of such approaches and negotiating the finances. Chef Reuben said he was getting more hands-on in his restaurants again, and we spoke about the filleting of the 60kg tuna which I had seen him do on his Facebook page the day before.  We spoke about menu development, and how difficult it is to do this whilst working so hard under pressure.  It helps that suppliers call to offer special produce, which can be built into a special blackboard menu, such as the one they use at Racine, in addition to a printed menu which is only changed every two months or so.  Balance in the menu is important, and guests’ favourite dishes (e.g. calf’s liver on the initial Reuben’s menu) should ideally not be removed.   Chef Reuben would like to introduce open fire cooking at Racine in future, and spoke about a new Robata Flame Grill at Reuben’s Franschhoek.  He has also recently acquired a Josper grill for Reuben’s.

We spoke about Eat Out Top 10 Restaurants, last year’s program having included being one of five judges. Chef Reuben said that he has not been approached yet about being a judge this year, and he is not sure if he would accept an invitation to be an Eat Out judge again.  In talking about Chef Richard, and their connection at Chamonix, Chef Reuben described him as our country’s most creative chef.  Funny was that both Chef Reuben and I could not remember the name of appalling UK restaurant writer Bruce Palling who had been flown in to judge our restaurants in 2013. 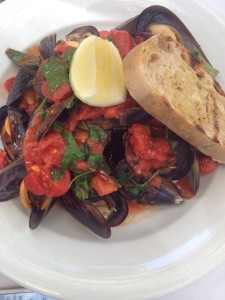 We sat outside on the deck underneath oak trees, protected from the fast-shooting acorns coming down from them by umbrellas.  White table cloths cover the tables, with placemats of woven copper, green, and brown strands, and material serviettes. Previously the Racine menu was a brownish A3 sheet which served as a placemat. The menu has been reduced to a white A4 photocopy.  Chef Nico has free reign in designing his menu, but first sends his ideas to Chef Reuben.  The Racine menu is short and sweet, with seven starters, eight main courses, and three desserts.  As Chamonix is on the route of the very popular Franschhoek Wine Tram, they have created an ‘Express Menu‘ for these guests visiting the Tasting Room, and who need to eat something quickly before they are picked up for their next stop by the Wine Bus.   The  Express Menu items include whitebait and aioli (R42), a sourdough sandwich (R50), penne with tomatoes (R68), a 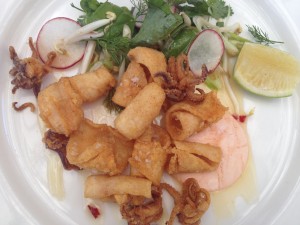 Franschhoek trout plate (R78), and a charcuterie and cheese plate (R98).  Chef Reuben ordered a very colourful plate of steamed West Coast mussels with parsley from the blackboard menu (R72), requesting it with a tomato sauce (the menu offers it with white wine cream).  I chose an old Reuben’s favourite of crisp salt and pepper squid from the standard menu (R68), which is served with a smoked tomato aioli, herb salad, and sweet and sour caramel.  Other starters include lemongrass-cured Franschhoek trout (R60), confit duck terrine (R70), beef tartar (R72), and tempura prawns with compressed watermelon (an interesting sounding element) and sliced jalapeno (R75).  Saldanha Bay oysters at R19 each are available on the blackboard. 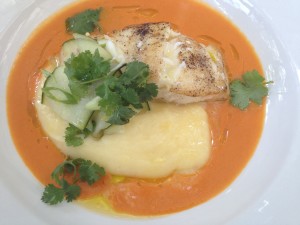 Both of us chose kingklip for our main course, mine served on a bed of mash and with spiced tomato yoghurt, as well as pickled cucumber (R140), while Chef Reuben had his plain with steamed vegetables.  Other main course options include a Racine burger (R98), prawn curry with green chillies (R115), seared Franschhoek trout (R135), and roast lamb rack (R165).  Sides all cost R30, and include unusual roast bone marrow, and rare cauliflower with cheese.   A small menu caters for children, offering burgers, penne, and ice cream.

We didn’t have desserts, but I was served a good dry Terbedore cappuccino.  Chef Reuben told me that he has discovered that he is lactose-intolerant, and now uses lactose-free products, some of which he is introducing in his restaurants too, such as lactose-free milk and ice-cream.  Dessert options are lime and ginger panna cotta (nice sounding combination of ingredients), spiced apricot malva pudding, and salted caramel parfait, in a price range of R55 – R68, with a cheese board costing R72. The blackboard offered a dark chocolate torte at R62, as well as a trio of sorbets at R55.

We stuck with water, Chef Reuben suffering from sinus and I having to drive back to Cape Town.  The bulk of the red wines are those of Chamonix (Rouge, Cabernet Franc, Greywacke Pinotage, Feldspar Pinot Noir, Troika, and Pinot Noir Reserve, in a price range of R55 – R350).  MCC is by Graham Beck (R250). White wines by Chamonix are Sauvignon Blanc, Unoaked Chardonnay, Reserve White, and Reserve Chardonnay, ranging in price from R78 – R250. The winelist, which is part of the menu, does not mention the availability of wine by the glass, and vintages oddly are only specified for the red wines.

I was impressed with Chef Reuben yet felt sorry for him, as he is so well-known, especially amongst Franschhoekers, who came over to greet him at our table.  This element of his fame may be something he would like less of.  We laughed when he told me that his children Latika and Max think it’s totally normal for their dad to be on TV.  Chef Reuben shared that while he is a BMW driver, he has had a 1968 and a 1974 Mercedes-Benz restored, a brand which his uncle drove.  It was a long three-hour lunch in a very relaxed environment, with good service offered by the staff.

2 replies on “Chef Reuben Riffel goes back to his restaurant roots with Racine in Franschhoek!”