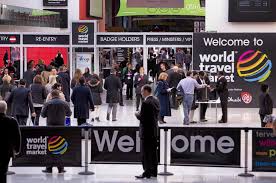 I returned to my guest house all charged up after a full day spent at the Cape Town International Convention Centre yesterday, to attend World Travel Market (WTM) Africa, the first time ever that a travel and tourism exhibition of such a stature has been held in Cape Town.

World Travel Market has been held in London for years, and is the second largest travel and tourism exhibition in the world, after ITB in Berlin, and larger than Indaba, which is held in Durban.  At the press conference yesterday afternoon it was said that Reed Exhibitions must have had tremendous confidence in Africa generally and in Cape Town specifically,  to have brought the exhibition to our city, partnering with Thebe in hosting it.  One was surprised at the many stands that had been sold, not only to Cape Town and Western Cape tourism players, but also to national brands (including Durban Tourism, which was interesting, especially as it was not manned on Saturday!) as well as a host of international brands such as Lufthansa, Singapore, Berlin Tourismus & Kongress GmbH, Dubai, Malaysia Tourism Promotion Board, Turkey, Reunion Island, Seychelles, Zambia 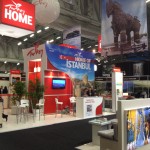 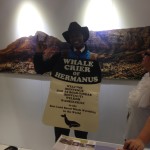 Tourism Board and Airports Company, Mozambique, and many more brands, there being about 150 stands in total.  Even the Whale Crier from Hermanus paid a visit!

The communication with WTM Africa had been efficient, attendees being invited to register in advance, so that one could attend for free, which must have led to the good attendance yesterday.  While the service at the registration desk could have been friendlier, it was efficient in general.  Other than visiting many of the exhibitors, and bumping into numerous tourism players on the floor, an important benefit was the interesting programme  of talks over the two days of the exhibition.   By the time I could get to the exhibition, at about 11h15, the talk on Mobile Apps was fully ‘occupied‘ with 100 attendees,  as one of the WTM Africa staff said, which meant that we were not let inside initially, for ‘health and safety reasons‘!  After calling for a senior manager, we were allowed to sit on the floor just to get to hear the talk.  Subsequent talks had enough seating (on chairs) for all those that wanted to listen, also at no charge.

The event programme included a talk by Dr Rod Ross, who spoke about the ‘A – Z of Global Business Trends‘. 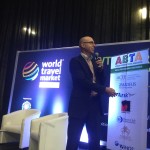 Dr Ross runs a travel and tourism consultancy called TravelLinck, which offers a number of services which he highlighted as trending.  For example Ancillary fees are the trend of charging for services the customer would like to use, as do Low Cost airlines.  This trend could spread to accommodation establishments. Carbon Emissions are a talking point when one travels, but air travel only makes up 2% of these.  The South African contribution to carbon emissions is minimal, compared to the USA and Asia.  Food costs could be higher than those of car rental, but corporate accountants focus more on the latter and almost never on food.  Apps like Open Table, Munch, and Foodspotting allow the convenience of reservations by mobile, as well as cost control. Generation Y travelers are immersed in their phones and spend more on their phones than on clothes. This is how they communicate, compared to older travelers who talk to each other.  Social sharing needs policies  in the workplace, Dr Ross said, but change is so fast that the policies do not keep up.   India, Brazil, and China are experiencing economic growth rates that are twice as fast as other countries, making them future travel growth markets.  Loyalty programs and benefit bundles lead corporates to sign joint agreements to benefit their traveling staff. Low Cost Carriers will grow, although South Africa has been missing the competitive price pressure of such airlines, with only two operating currently. On-Demand mobile apps are growing, and Uber was mentioned as a less expensive taxi service, introduced in a number of cities in the world (already banned in Belgium, and about to be in Germany as they are not licensed taxi drivers, we heard on German ZDF TV last night).   Travel policies of corporates drive down costs as travel increases.   QR codes provide instant links to websites, and we were shown a photograph of one on a pavement, near a hotel!  Ultra high-speed travel will 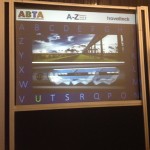 come, South African Elon Musk working on a 1000 km per hour Hyperloop between Los Angeles and San Francisco, reducing the journey to 35 minutes.  Wearable technology such as Google Glass and watches will develop.  In answering a question from the floor, Dr Ross said that Africa excels at mobile payments, handling the highest volumes in the world. He would like to see more of the Food apps developed, and better MICE (Meetings, Incentives, Conferences, and Events) cost control.

Nick Hall from Digital Tourism Think Tank said that mobile technology will impact on all aspects of travel. For example, automated Check-Ins will allow guests to open their room doors, order from room service, and receive concierge services via their mobile phones.   He emphasised that mobile websites are different to desktop sites that are sized down for mobile phones, and contain only the information which the travel needs whilst traveling. He spoke about a bar ordering app, which allows one to place the order, and then to receive a message when the drink is ready, to avoid crowding at the bar counter.  Similarly Disney has an app that allows one to queue without standing in a line.  One receives a message when it is one’s turn to go on the ride. The HotelTonight app sells last minutes same-day rooms.  The ViaTor app has easy bookability, good images, and simplicity in navigation.  Augmented visitor experiences allow visitors to ‘bring things to life’ on the phone, e.g. in a museum, or Europe’s highest building The Shard in London, and at Holiday Inns during the recent Olympics.

Rory Kenny from TripAdvisor spoke about its mobile app, and how they had set up City Guides for mobile separately initially, but now they have been merged with TripAdvisor data.  He said that the company has been hotel-focused in the past, but now they are growing their Restaurant and Attraction reviews, and are a new priority, he said.  He described their desktop site for being of use to  ‘planophobics’, who book everything in advance, while the mobile app caters for those travelers who haven’t booked, and then use their mobile apps to find out information about their destination and make  bookings on arrival.  The Restaurant focus is particularly important for their Asian market, which demands perfect quality and large photographs. TripAdvisor’s mobile app allows a free listing of restaurants, as well as same-day specials.  Facebook strongly drives the downloading of apps, Kenny said.  He also announced that they have just facilitated an Instant Booking service on mobile. They are working on Personalisation, allowing one to see the reviews by one’s Facebook friends, giving their reviews greater credibility.