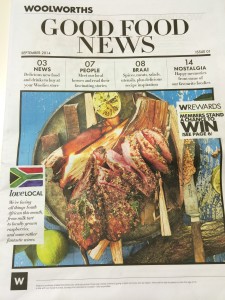 We wrote recently how Woolworths has been misleading consumers with claims about its Ayrshire milk, deceiving food labelling, and how it tries to create an image of healthy produce via its ‘Hayden Quinn: South Africa‘ series on SABC3. The group Grass Consumer Food Action has been persistent in its criticism of Woolworths, and appears to have hit a raw nerve in the Good Business Journey division at Woolworths, the retailer having launched a brand new ‘Good Food News‘ 16-page insert in the Sunday Times yesterday! It looks like a Taste magazine (the Woolworths sponsored magazine published by New Media Publishing) but printed in Tabloid format on recycled paper!

While the Tabloid has ‘headlines’ on page 1, to attract one’s attention to the content, it consists of a mix of ‘advertorials’ of its award-winning wines (since when are wines a food, as per the name of the publication?) in ‘Crowned as the best‘; ‘responsibly sourced‘ fish;  braai suggestions for ‘Ready Steady Braai’; and ‘Flavours of Home‘ (prepared 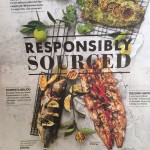 foods with strong spices such as curries, and traditional foods such as koeksisters and milk tart); as well as editorial. It is obviously planned as a monthly insert, numbered ‘Issue 01′, and dated September 2014.  The focus of the first issue is ‘lovelocal‘:

*   Page 4 has no headline, but reveals further product news: dried fruit from Koelfontein; hand cooked crisps and potato pop chips; its imported World Cheese Award-winning Montagnolo Affine (odd given the ‘LoveLocal‘ theme of the publication), for which  it holds the exclusive distribution rights in our country; and its range of Single Vineyard premium wines.

*   Page 6 presents more new products, such as flavoured fruit drinks (containing only 12% fruit) and ginger beer.  Alcohol-free cocktails will be launched today, it announces. Once again we ask if beverages are a ‘Food‘! Chicken espetades and prime chicken breast roast are recommended for braais.  This page also contains a plug for its Taste magazine! 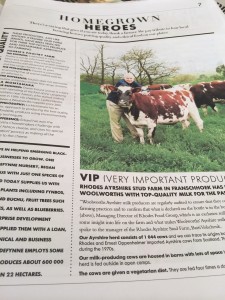 It is only on page 7 that Woolworths attempts to counter the criticism levelled at it in respect of the conditions under which its supplier’s Ayrshire stud is housed.  Taking up three-quarters of the page, with a large photograph of Bruce Henderson of Rhodes Food Group in Franschhoek hanging onto his Ayrshire cows, the ‘article’ defines the company as a ‘VIP (Very important Producer)’!   It also emphasises that it has supplied Woolworths with ‘top-quality milk’ for the past 15 years. Henderson is quoted as saying: ‘Woolworth Ayrshire milk producers are regularly audited to ensure that they comply with our Ayrshire farming practices and to confirm that what is declared on the bottle is in the bottle‘!   This of course has not always been the case, the continued pressure by Grass Consumer Food Action group having led to regular honesty updates of Woolworths’ packaging!  It is mentioned that the origin of its Ayrshire herd of over 1000 cows dates back to the early 1900s when they were imported from Scotland by Cecil John Rhodes and Ernest Oppenheimer, reflecting a huge degree of desperation for the retailer to names-drop at this historic level!  Getting to the point finally, they write: ‘Our milk-producing cows are housed in barns with lots of space to walk around and feed.  The younger herd is fed outside in open camps‘.   It is also mentioned that the Ayrshire cows are fed a vegetarian diet (of grass one assumes), being fed four times a day, and milked three times daily. The page is shared with brief mentions of Fourie’s Poultry farms (suppliers to Woolworths of ‘commercial and free-range chickens‘ for 56 years); La Montanara cheesery; and Defynne Nursery, which supplies indigenous plants such as fynbos, spekboom, buchu, blueberries, and lemon trees.  All of this proactive defensiveness is packaged under the headline ‘Homegrown Heroes‘, with the following explanation: ‘There’s a saying that goes if you ate today, thank a farmer. We pay tribute to four local farming heroes putting quality and ethical food on our plates’.  However, only three farmers are referred to on the page.

*   Page 10 is braai-focused, given Heritage Day (and more recently ‘renamed’ ‘National Braai Day‘) on Wednesday, with recipes for 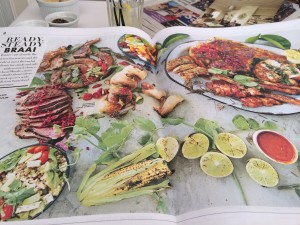 braai foods shown in a double page spread on pages 8 and 9.  Incidentally it mentions its ‘free-range lambs roam freely, with access to ample grazing and water. They are never given routine antibiotics or growth hormones, because they don’t need them‘! I am not sure whether live lambs can be described as ‘free-range‘?!  No supplier is mentioned, but we know from ‘Hayden Quinn: South Africa‘ episode 8 that farmer Hennie de Bod in the Karoo near Prieska is one of Woolworths’ lamb suppliers.

*   Page 11 shows a mouth-watering stack of steaks, and refers to its ‘free-range beef‘: ‘Woolworths free-range (sic) steaks are matured for 35 days. Our cattle eat grass within their diet, which contributes to the yellowish appearance of the fat. They are never given hormone or routine antibiotics’. One must question whether steak can be described as ‘free-range’! 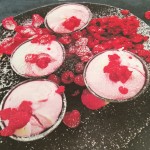 Pages 12 and 13 have berry beautiful photography, especially of a raspberry-and-rose soufflé.  Their ‘VIP (Very Important Producer’) is Sean Tager, with farms near Hermanus and George, who grows raspberries in tunnels, and is able to supply raspberries almost  all year round.

*   Almost as an after-thought, page 14 features four food writers, as if their presence would give Woolworths’ produce, its suppliers, and its new ‘Good Food News’ greater credibility!   Sam Woulidge is a free-lance writer for Taste magazine; so is Siba Mtongana, who also is a judge on ‘Chopped South Africa’;  Clement Pedro works for New Media Publishing, on its Taste magazine; while Abigail Donnelly is the Food editor of Taste! (and of Eat Out too, but that’s a different story!).  Misleading the reader of the publication, it does not declare that both Woulidge and Mtongana are columnists for Taste! Donnelly prepared a full-page spread of hake dishes on page 15. Oddly the WWF-SASSI system of classifying fish by colour based on its availability, is not mentioned at all, the only reference in the ‘Responsibly Sourced‘ fish feature on page 16 being that ‘… all our fish is responsibly sourced, and we’ll never sell red-listed species’!   Does that mean that Woolworths is in fact selling orange-listed fish such as kingklip?

Interesting is that Woolworths’ sponsorship of ‘Hayden Quinn: South Africa‘ is not referred to in ‘Good Food News’ at all, extremely odd, given the millions of Rands it has ploughed into the TV series with the unknown Australian TV presenter. Quinn has been on a journey throughout South Africa, highlighting Woolworths’ many sustainable produce suppliers! Also visible by its absence is the B-word, Woolworths clearly not yet having come to terms with the massive support for Professor Tim Noakes’ Banting eating program!  One wonders how New Media Publishing’s social conscience and ethics live with its client’s consumer deception, which it perpetuates in its publication too!  Can Eat Out demand of chefs it is evaluating for its Top 10 Restaurant list to source ethically if the same editor (Donnelly) promotes Woolworths’ unethical animal treatment and misleading consumer information?!

POSTSCRIPT 22/9: In pre-publicity for tonight’s episode 11 of ‘Hayden Quinn: South Africa‘ (featuring Chef Jackie Cameron), the Food Weekly supplement of the Sunday Times yesterday claimed that ‘The Hayden Quinn Show‘ (sic) is brought to you by Woolworths and WWF (sic)…’!  Anyone who has seen the TV series will know that the main sponsor is Nedbank, despite most of the content including a visit by Quinn to a Woolworths supplier!

POSTSCRIPT 22/9:  Do read the two comments received for this blogpost.

POSTSCRIPT 23/9: In V&A Waterfront-style rude and cheeky Tweeting yesterday, it was evident that Woolworths does not like criticism, just ignoring this Blogpost and the Tweet with links to it.  When I asked if they would respond, they Tweeted: ‘is there something in particular we can help answer?‘.  Then it claimed that the ‘pull-out’ (i.e. ‘Good Food News‘ insert) ‘was planned months ago, as it takes a long time to produce‘!  The content was far too defensive about recent criticism for Woolworths to have been planned long ago.  Then another cheeky Tweet: ‘We’re pleased though that you think we can do something that detailed in a couple of days’ – our assumption is that it was indeed cobbled together in a couple of days, in how it came across.  The 2-page berry feature is from the October Taste magazine, and there are five ‘advertorial‘ pages without any major writing challenges plus a Braai double page spread, nine of the 16 pages therefore requiring little work.  The Ayrshire story has been written before and appeared in a very recent video.  New Media Publishing creates publications with tight turn-around times continuously!   The last Tweet in the Woolworths barrage was a repeat message: ‘Marketing is planned many months in advance. The logistics behind the pull-out you refer to, (sic) require a long lead time’.

12 replies on “Woolworths under consumer pressure, on the back-foot, in massive Sunday Times supplement?!”

Thank you No Expectation Travellers for posting a

Thank you Sandra Keet for your wonderful 5/5 revie