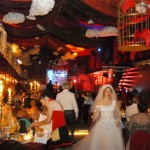 Wow! wow! wow! What a show!   Bravo to the owners and cast of Vaudeville, who put on the most amazing show last night.  Vaudeville has been described as “mischievous mayhem, eye candy and magical circus”, and features South African as well as international acts.

Vaudeville opened a week ago, in an old rubber factory on Mechau Street (no one has heard of it – it is one street parallel to Hans Strydom Avenue, between Buitengracht and Bree Streets) – and has been cleverly decorated to create a theatrical space with a stage, close to most tables, with cottonwool clouds, huge dangling birdcages, VIP seating upstairs, for a R 40 premium per head for the view, with lots of red drapery from the ceiling and red velvet curtains.

Vaudeville was a popular form of entertainment in the USA and Canada from 1880 – 1930.  “Each performance was made up of a series of unrelated acts grouped together on a common bill”, says Wikipedia.

The arrival booking checking was quick, a complimentary glass of bubbly presented to us as we walked through to the table,  with two stilt walkers already evident in the entrance area – a lady in red with her French poodle, also on stilts.   The chairs are covered in red velvet, have an unusual design, and are most comfortable.

A beautifully produced folder contains the menu and winelist, and allows for the replacement of its content as the menu changes.   A French flair is immediately evident, with French-style music played.   One large and a smaller screen, on opposite ends of the venue, features non-stop movies, mainly in black and white.  Whilst one takes a seat one senses a buzz, with waitresses in red bustier tops and black skirts serving the tables, offering drinks, and bringing the starter.   A bride who lost her husband at the altar roams around , looking very lost, a penguin shuffles along making appropriate penguin noises, and a showmaster looks for his cast, all building an excitement about the show to come.

Rene is our hostess, and takes our main course order, a choice of three.  She organises the drinks, is friendly, and obliges all our requests, including more paper to make notes of all we experience.   She worked at Madame Zingara, as did her GM Jennifer, who comes to say hello.

The menu is simple, and relatively easy to cater for the 350 or so guests attending per show.  The starter is a “house salad”, with mainly green leaves, the odd piece of beetroot, crumbled feta and avacado, as well as slices of ordinary bread and a meze platter of five dishes : yummy butternut and ricotta, olives, tzatziki, hummus, and aubergine.   The main course offers the choice of “free-range Namibian sirloin served with chunky potato wedges, roasted vegetables and a rich red wine jus”, a “ravioli of prawn and smoked paprika in a brandied lobster bisque with wilted baby spinach”, and “roast butternut, pea and lemon zest risotto with caramelised ginger and wild rocket”.     These menu descriptions were an over-statement relative to the food served, especially as far as the “sirloin” was concerned – while one expected a steak to be served, it was 4 small slices of rare roast beef (we were told we could only have it served “medium-rare”) served on top of a collection of vegetables, and a container of tough unexciting “unchunky” potato wedges.   The vegetarian risotto was very bland, and was a poor compensation for non-meat eaters.   The dessert was billed as “adult fantasy platters with a selection of decadent sweet delights”, difficult to predict that it would be a colourful plate of shared biscuits, chocolate brownies, homemade marshmallows, cupcakes and meringues.  No coffee at all is served, but they are working on this, says Rene.   Only the “dessert” was in keeping with the differentness of the show and the venue – the starter and main courses did not reach the very high level set by the outstanding show, and it felt as if they were saving money on the food offering and putting it all into the show.   The catering is outsourced to DISH, a company doing in-home catering, not with the best reputation in town.

The winelist is not very extensive, with two bubblies (Graham Beck at R 180 and Douglas Green at R 110), ten red wines range in price from R 95 for an unknown Ink Spot Vin Noir to R 550 for the Vergelegen Estate Red.  Vergelegen supplies both the cheapest (Vin de Florence, at R 95) and most expensive (estate white, R 540) of the eight white wines.  Two rose’s, and wines by the glass, are also offered.   No vintages are specified on the winelist.

The Vaudeville show is divided into four sections, with food served in-between these.  The show does not stop, with 19 acts ranging from trapeze artists on rings and ropes, dangling from the ceiling, jugglers, to acrobats on stage, to Tango dancers, singers and dancers led by Irit Noble, tapdancers, and an interesting band called Jinx playing a “blend of circus Balkan and oompah” on Bass, saxophone and violin, providing non-stop energy and excitement with fast-paced music, mainly with a French flair and incorporating swing music.   The show is slick, extremely professional, and must have about 30 performers in total.  It felt to be world-class.   The movies run on the screens throughout the evening, so one has lots to see and enjoy.

Upstairs in the building is the new Moroccan-themed Fez Club, to which one can enter for free if one has been to see the show.  The Fez was a popular club in Cape Town, but closed down some time ago.    The cloakrooms are fun, with doors that make them look like little “Heidi-houses”, but are not in keeping with the rest of the interior design.   It felt warm inside, despite it being a coolish evening.  One hopes that air conditioning will cool things down when it gets hotter.

The owners are Tom Pearson-Adam and Robert Sawyer, with hotel/entertainment interests, including the Fez Club, in London.  Together with the show producers Will Hutton, Andrew Florenca and Dirk Vervaeke, their goal is to create the “most sought-after nightspot in Cape Town”.

If you are looking for a quiet night out, then Vaudeville is not for you. You will leave the show energised, ready to dance and party the night away.

NOTE: A return visit three weeks after this review was written was a huge disappointment – read our latest review.

3 replies on “Vaudeville is wonderville!”