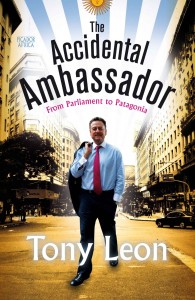 Gorry Bowes-Taylor has built up a loyal following of book lovers as well as book launch lunch lovers on behalf of Wordsworth.  The launch of Tony Leon’s latest book, ‘The Accidental Ambassador: from Parliament to Patagonia‘, which was released two weeks ago, was sold out at Myoga on Saturday, not only due to the witty smart speaker but also the excellent menu offered by Chef Mike Bassett for the event.

The book, Leon’s second (the first was ‘On the Contrary‘), tells the story of Leon’s retirement from DA (Democratic Alliance) opposition politics after twenty years, and taking up an appointment as ambassador to Argentina, Uruguay, and Paraguay, ‘jumping before I was pushed’ from his party, as good politicians should do, he said.  The book launch made it clear that politicians have the gift of the gab, and Leon is no exception.  He is an excellent salesman for his book, attracting one’s attention with a provocative question – e.g. how does the previous Leader of the DA promote an ANC government in South America – and then encourages one to buy the book without answering his question, so as to not do Wordsworth (and himself of course) out of revenue!

Leon names-drops a lot – he is a close friend of Joost van der Westhuizen, and Pieter-Dirk Uys’ Evita Bezuidenhout is 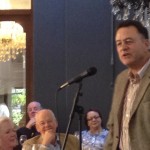 quoted too: ‘As a fellow accidental ambassador, reading Tony Leon’s adventures in the land of the original Evita and the gauchos, reminded me there are reasons to be grateful we live in South Africa after all‘.  Even ex-President Nelson Mandela is quoted as saying about Tony Leon: ‘Your contribution to democracy is enormous. You have far more support for all you have done than you might ever read about‘, high praise indeed!

Myoga is located in the Vineyard Hotel grounds, and there was a severe traffic jam in getting to park on the property, given a huge exodus of a church group with had used the conference hall, made worse by a hotel security person who could not cope with this nor speed things up.   All 100 guest had pre-booked, and were seated according to a plan.  The seat at the table that I was allocated to had two adjoining table legs where one’s own legs were meant to be, making it impossible to sit there.  The manager Shameemah was most unhelpful, saying that she could do nothing at all, and that is how it is!  Eventually she made a plan by offering a seat at a table with the most friendly ‘Wordsworthians’, who were delighted I had taken the last seat at the table, as it prevented someone else whom they had experienced at the previous lunch from sharing the table with them.  One of the table companions is a regular blog reader, and she quoted reviews she had read on our blog.  Ingrid Crowther and her mother were lovely guests too, and we shared notes about restaurant experiences.

Most of the guests at this table attend each of Bowes-Taylor’s Wordsworth book launch lunches, not necessarily because they like the author, will buy the book, or are avid readers, but because they get to experience new restaurants, meet nice people, eat good food, taste unknown wines, and are entertained by the authors talking about their new books, all at the cost of R250.  The ‘Wordsworthians’ were more than delighted with the Tony Leon book launch lunch, as it ticked all the right boxes, despite some problems experienced in making the bookings! The disasterous Penny Vincenzi book launch lunch at Sevruga three years ago got the restaurant removed from the Bowes-Taylor list, while De Grendel restaurant appears to be one of the popular venues.

Chef Mike and his team put on a lunch of note, which was paired with the wines of the Hemel en Aarde Valley’s Domaine des Dieux. Shane Mullis introduced the wine estate, each guest having received a glass of Rose of Sharon MCC 2008 as a welcome drink, made of 75% Pinot Noir and 25 % Chardonnay, and which spent 42 months on the lees. The boutique wine estate name means ‘place of the gods‘, and is owned by Sharon Parnell. At 320 meters above sea level, the wine estate is one of the highest in the country. It is particularly known for its sparkling wines, the Claudia MCC 2007 being made from 80% Chardonnay and 20% Pinot Noir.  Other wines in the range are the Chardonnay 2010, and Josephine Pinot Noir 2010. 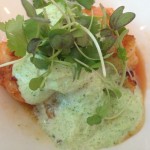 The ‘Tantalizer’ was a superb starter of pan fried prawns with the Myoga signature sweet chili, crowned with coriander infused cream, which was paired with the Domaine des Dieux Sauvignon Blanc 2009, with asparagus notes and ripe fruit aromas.  The sauce was so delicious, that everyone at our table requested a spoon, to finish every last drop!  ‘The Main Event‘ was a sous-vide beef fillet, 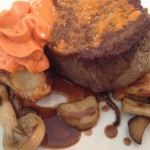 which was served with crispy potatoes, pan fried mushrooms, smoked bordelaise jus, and finished off with a sun-dried tomato mousse. The main course was paired with an excellent Domaine des Dieux Syrah/Mourvédre 2010.   A perfectly made dry cappuccino accompanied ‘The Crowning Glory’, a refreshing dessert of golden tart, which was filled 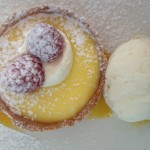 with lemon custard on peach jus, complemented with a most unusual goat’s cheese ice cream.

Leon concluded that if one was not interested in reading his book for the South African or Argentinian politics, one could buy it for the handy tips of where to shop and what to see in Buenos Airies, which his wife Michal had written for the book. His time in South America showed him that Argentina is even more corrupt than South Africa.  He said it was sad to see how Argentina, once the seventh largest economy, now has a smaller economy than that of South Africa. He says the country is very focused on its past rather than on its future, and mocked it for representing a ‘vote for a better yesterday‘! The decline of the country appears to have been triggered off by the death of ex-First Lady Eva Duarte Perron in 1952. Leon also told the story of Argentina’s President Cristina Fernández de Kirchner, who would not set foot in the cathedral of Buenos Aires, as its Cardinal Jorge Bergoglio had criticised her government.  Yet she traveled to Rome to attend his investure as the new Pope Francis earlier this year! He referred to other famous Argentinians: soccer star Lionel Messi and new Queen Maxima of the Netherlands. Leon took his post in 2009, and the forthcoming soccer World Cup in South Africa helped him to leverage off big events, including rugby.  The book details what happens in an embassy, his budget of about R20 million employing 27 staff per year. Leon told a funny story about his lunch with ex-South African Nobel prize winner JM Coetzee, who had been painted as being a recluse. Coetzee was participating in a Literary Festival in Buenos Aires, and Leon mistakenly invited him to the city’s best steak restaurant, the writer being a strict vegetarian! Leon found him to be anything but reclusive. Leon said that one should live in another country to appreciate one’s own country!

As an ambassador, Leon spent a lot of time in restaurants, and at dinners and cocktail parties at other embassies, and at the homes of Argentian contacts he got to know in his three years.  He raves about the typical Asado barbeque, and the steaks served in the ‘parillas’, their meat cuts differing to ours. His guests will have been served samoosas, bobotie, and malva pudding, he shares. Funny is his chapter in not being able to find any Big Macs in Buenos Aires, the world famous burger being the benchmark for the real value of country’s currencies as measured by The Economist, as it would have shown up Argentina’s high inflation rate (of about 25%).  No mention is made by him of any South African wines or the role they may have played in enhancing trade and cultural relations between South Africa and Argentina!  He did visit Mendoza, the Argentinian wine region, on a number of occasions, but does not reveal which Malbec wines appealed to him.

Leon is articulate as a speaker and as a writer too, and the book is easy to read and hard to put down.  One senses that he must have bitten his tongue on numerous occasions about his host country and his home country in the three years of his ambassadorship, having ended his latest career a year early, 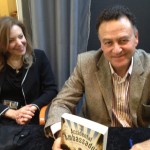 not explaining clearly why he did not end the term of his post.  He now is a consultant, writer, and speaker.