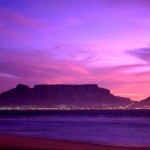 Table Mountain is South Africa’s only nominee for the New7Wonders of Nature, after the Table Mountain Aerial Cableway Company stepped in by funding the entry fee for this icon of Cape Town, and even South African tourism, reports News24.

Earlier this month it was reported that S A Tourism was supporting the nomination process for the four South African finalists Kruger National Park, Cape of Good Hope, Table Mountain and the Vredefort Crater.

However, S A Tourism has now withdrawn its support and sponsorship, on the grounds of its lack of funds for the $ 199 administration fee per entry!   SA Tourism Global Communications Manager Wendy Tlou is quoted as saying:”    As you may know, we work on budgets that have been allocated according to projects that are planned for a particluar financial year.   Given the impact of the fluctuating exchange rate, and that we operate mostly internationally, where the rand is not as strong as we would like it to be, this has a very negative impact on our budgets.    As such, we’ve had to let go of projects that could have brought SA even more publicity purely because of some of these constraints.”

Entries for the campaign closed at midnight last night, and the public around the world can vote for its top seven wonders of nature between January and July, whereafter 21 finalists will be chosen, open to further voting to select the New7Wonders of Nature.