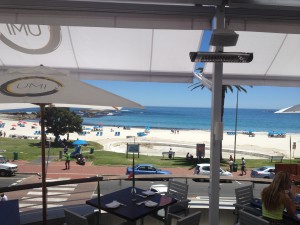 Katie Friedman and I chose a picture perfect day to try out Umi (which means sea or ocean in Japanese) restaurant in Camps Bay for lunch yesterday, which opened a month ago. The service is very slick and friendly, if not a little over-enthusiastic, the view outstanding, plating unusual, and the food very good, and even ‘divine‘ according to our waiter!

The restaurant space is massive, seating 250 patrons on a terrace section which flows into an intermediate section, as well as the inside of the restaurant, being the space which was previously Summerville, and then Pepper Club on the Beach, in addition to a shop or two next door.   Everything is grey, the chairs being a mix of light and dark grey, the lounge couches being white with a grey pattern, and the waiters wear a smart branded golf-shirt with a blossom print, and grey apron.  There is a massive wooden counter inside the restaurant.  In the far left corner are rose gold steel  lanterns, 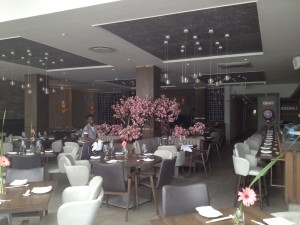 that look as if they are made of orange plastic, while the rest of the lighting is individual glass bulb hanging lamps.  The menu cover is grey, with yellow design features, as is the wine list cover. Unusual in terms of the colour scheme is a massive collection of cherry blossom branches in pink and white inside the restaurant, and each table has a large pink Barberton daisy in a vase with a long green leaf, the leaf used on the food plates too.  The wooden topped tables are laid with a sideplate, serviette and a set of chop sticks, which the waiter removes from its paper cover and puts onto a chopstick stand. No cutlery is offered, and was not needed for our lunch. 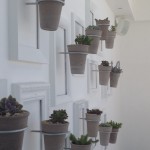 The décor for Umi, and The Marly 11 bedroom boutique hotel above it, which once housed a nightclub which caused huge strife between the former club owner and the Bay Hotel next door due to noise levels, was done by Gregor Bremer of Soda Creations.  The entrance to the hotel is via a lift next to the Post Office on the same level as Umi, and one arrives in an open lounge, with a massive couch probably seating 10 persons, covering the length of the space.  The decor looked similar to that of the Alphen Hotel, but hotel GM Hanouschka Hoffeldt (previously at Zevenwacht) assured me that they used a different decorator for the Alphen.  There are 11 bedrooms, six of which are seafacing, and two have a bedroom with a jacuzzi on the terrace.   The view onto Camps Bay beach is to die for from the hotel and restaurant.  The design approach is less is more, and all frills have been removed.  Bedding is white, as is the leather seating.  Everything else is grey.  Charcoal sketches of famous persons, 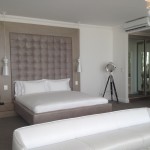 e.g. Yoko Ono, are in each room, Riaan van Zyl having done the art for the hotel.  The passage leading to the bedrooms is long, and looks like a library at its starting point, with a laptop, and books on the shelves.   A private pool for hotel guests only is smallish, but has a view onto the ocean too, and all the walls are covered with plants – succulents in pots, to create a design feature, on one wall, and another fully grown plant wall.  Hotel guests can drive into the Promenade parking, and stop in front of the hotel door from their dedicated parking area.

Brian Leighton-Buys (who boldly has taken his wife’s maiden name as his second surname) comes from London, where he worked in the hospitality industry for 20 years, Carluccio’s being well- known and pumping, Katie said.   He also worked at Young’s, previously a brewery, in London, and at The Taj hotel in Cape Town before joining the ‘Kovensky group’, my name for Paul’s empire.  He provided interesting input as to how Nasty Neil Pendock manages to get around the liquor licence regulations in selling wines from his petite Wine Gallery @ The Taj!  An awning that was meant to be 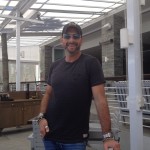 fixed in the restaurant area just as we sat down appeared to be in order or was fixed while we checked out the hotel, a clever move by Brian.   We were surprised when Paul Kovensky, owner of the Kove Collection (the official company name), came to say hello, not knowing that we were lunching there as we had not booked. He also owns Paranga, Zenzero, Bungalow, and The Alphen Hotel with its 5 Rooms and La Belle restaurants. I asked him if he sleeps well at night, and he said he does, raving about his little boy.  He already has a new project up his sleeve, but is staying mum about it, wanting to get through the summer season first.  We spoke about the departure of Sensei Deon, his Umi sushi chef, after just three weeks, who had left Glenwood and L’ermitage in Franschhoek after short periods of time too. 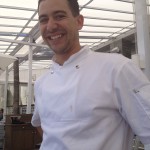 Chef Julian Gabriel, previously at Delaire Graff’s main restaurant and at Café Roux in Noordhoek, is the Executive Chef.  Paul has contracted Scott Hallsworth, who worked at Nobu in London and in Melbourne, to do staff training and to compile the menu, and to check on things every month.

Paul told us that Amber Deetlefs, previously a partner in Pinotage restaurant in Beijing, has joined them as chef at Paranga.  Chef Neil Norman returned for a very short stint at Zenzero, and has been replaced by Judy Tewnion, whose husband Richie is the chef at Kloof Street House.

The menu looks very Nobu-ish, was Katie’s first reaction, having been told that Umi’s prices are cheaper than those of Nobu, but having recently eaten there, she felt that the prices are on a par.  Our waiter Gradwill handed us the menu, and a minute later shared his favourites with us, each of the recommended dishes being ‘divine’, interrupting us regularly as we were chatting and catching up.  We were offered Miso soup, and one is not sure if this is complimentary, but it is charged (at R50) the waiter said when I asked.   We were told that the dishes would arrive when ready, and that in Japanese family style cuisine we should share our dishes as they were served.  We were also told that they do not have soy sauce on the table, but that one can request it,  It is poured from a jug in a little container at the table, my request for it having been forgotten. 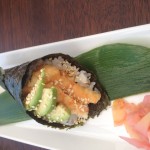 I had ordered prawn tempura, and did not understand from the menu that it was sushi, of which two slices had a tiny prawn tempura in them more for design effect, and quite misleading as a menu description.  Brian immediately offered to replace this was something else, and I chose the Tempura Prawn hand roll with avocado (R75), large in size and with quite a bite, wasabi mayonnaise being used, which I did not see in the fineprint description for the dish. I felt it to be a little dry, with not enough mayo.  Katie’s starter 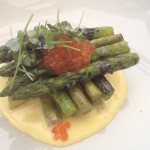 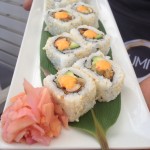 For her main course Katie ordered sushi, and I ordered the slow cooked BBQ  pork belly, which was topped with spicy miso, a highlight of the lunch, and the favourite of Brian 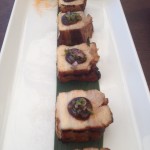 The winelist cover is in grey leather, with  the Umi logo in grey and yellow, and yellow touches on each page.  Sake costs R300 – R700.  The list of nineteen Champagne starts at R950 for Veuve Clicquot NV, Moët & Chandon NV, and Louis Roederer NV (available by the glass too at R250), peaking at R10000 for Armand ‘De’ (sic) Brignac Rosé!  Only four MCCs are available:  Pongrácz Brut (R60/R260) and Rosé (R70/R300), and Graham Beck Brut (R280) and Brut Rosé (R340).  The winelist won’t feature on the Diners Club Winelist of the Year Awards, not offering vintage nor origin information. Shiraz starts at R50/R200 for Durbanville Hills, peaking at R360 for Rijk’s Private Cellar R360, with Delaire Graff, Raka Biography, Saxenburg, and Zandvliet Kalkveld also offered.  A nice change is that no alcohol brand is associated with the restaurant, its umbrellas and staff clothing being restaurant-branded only.

Although the same criticism I levelled at KOI Restaurant at The Ambassador about no Asian chefs being visible (one cannot see the food preparation at Umi) should apply to Umi too, I had a much better feel about the quality of the food and its plating at Umi.  The friendliness of all the staff in the Umi restaurant as well as The Marly hotel was impressive, starting at the top with owner Paul.  Brian came to check on us frequently, something managers rarely do these days.  While the prices are on the high side, the Umi menu does offer a good spread of dish prices, as is typical of the Kove Collection restaurants, allowing one to choose more affordable dishes if one wants to.  Umi can be rated as the best restaurant in Camps Bay. Our waiter was the only off-putting part of our experience, being over-confident, and presumptuous enough to want to choose ‘divine’ dishes for us.   All of this in a ‘Fifty Shades of Grey’ setting, with a wonderful view onto Camps Bay beach!