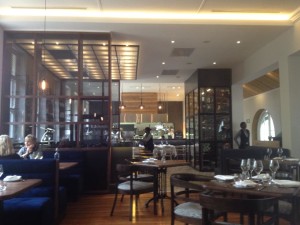 Yesterday was only the second day of Open Door being open on Constantia Uitsig, but it felt as if it had always been there, with everything running smoothly.  Open Door is the third restaurant of co-owners Neil Grant and Barry Engelbrecht, alongside Burrata and Bocca, and serves country fare.

Previously the home to The River Café on the wine estate, with a tasting room on the side which has moved across the driveway, the space of Open Door is large, being able to seat 250 patrons at full capacity, in different sections. One enters around the corner, and no longer at the former tasting room entrance. The main restaurant room is spacious, with a gas fireplace to come at the one end, and an open kitchen on the other end, with the bar close to the kitchen section, opposite of which is Neil’s precious wine collection, looking smaller than that of Burrata, but is not, 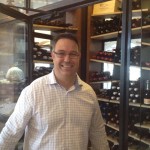 Neil corrected me. The chairs are upholstered in blue and white patterned fabric, with wooden table tops, and 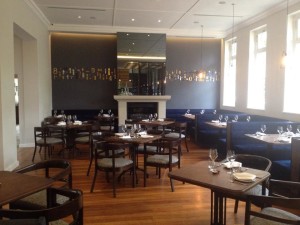 strong-blue banquettes.  From the main restaurant room is a room where the wineshop and tasting section used to be, which will be used for special events. Its walls are gun-metal green and chairs have blue/grey upholstery.  In this section is Manager Matteo Guidon’s office, with a quirky ‘Headmaster’s Office‘ on the door! A third room is light and bright, with white walls and white chairs, and will be the room in which breakfasts will be served in the next few months. Chef Annemarie looks very settled with her kitchen team.  All 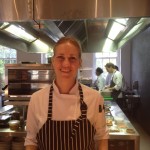 rooms open onto terraces, which will be popular in summer, a dam with greenery being finished off in the far distance too, and mountain-biking trails being prepared for cycling visitors.   The door theme is cleverly carried through by INHOUSE design agency, which also did the decor for Burrata and Bocca, so wood is an important element of the design.  For example, as 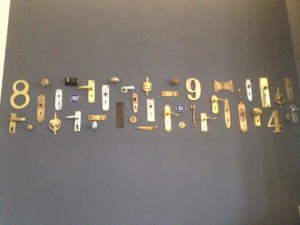 one enters the glass sliding doors, with the only Open Door branding on them, one sees wooden beams protruding above the door, which were reused from the building renovation.  In the function room whole doors have cleverly been hung from the ceiling, a completely unusual design quirk! In the main restaurant room a clever collage of house numbers and door handles decorates both sides of the fireplace.  Near the front door there is a collection of locks.  I saw only one painting on a wall in the whole building, in the Breakfast Room. 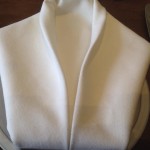 and pepper, which come from The Potter’s Gallery in Kleinmond.  Cutlery is Italian, from the Matisse range, and brand-new shiny.   The menu and winelist covers look impressive, with a cork look and blue leather binding, simply branded ‘Open Door’. Between 15h00 – 18h00 one can sit outside in future, called their ‘Community Hour’, and order light meals such as quiche, with coffee and wine, the kitchen 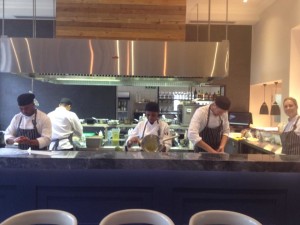 being closed in this period.  The menu ends with a story of how they opened their doors as far back as 1685, when Simon van der Stel was allocated the farm Constantia. Over time the farm was divided into different properties, and a school was built. The school building was replaced by the building which became home to The River Café, originally used as an educational facility, until The River Café closed down last year. La Colombe previously operated from the property too, and has moved to Hout Bay.  Open Door is the only restaurant now operating on the wine estate.   I asked Neil why they had been granted the lease, and he laughed in saying that their sales pitch must have been the best. 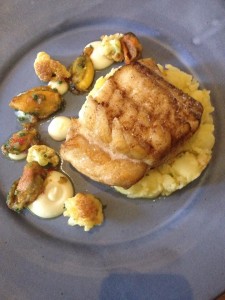 Whitney Wentzel ordered the linefish of the day, being pan-roasted kingklip, served with crushed potatoes, cauliflower, mussels, and chili and lime (R135).  Other options on the Café menu are soup of the day (R70); poached quince salad with feta, beetroot, and walnut (R82), chicken Caesar salad with croutons (R85); a good sounding brioche roll with pulled pork belly (R98); 300 gram Chalmar beef sirloin (R169); and a beef burger with bacon and hand-cut chips (R105).   A children’s menu is on this page too, showing that the little ones are as important as their parents, being offered hake, chicken breast, and spaghetti with pea sauce, and lovely dessert delights such as cookies and steamed milk, and ice lollies! 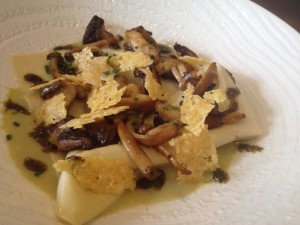 On the second page is an a la carte menu, from which one can order dishes for lunch and for dinner.  Starters are pork rillettes (R68); a salad of tuna gravlax with avocado, green olives, radish, and celery (R78); poached crayfish tail with bisque, kale, parsnip, and preserved lemons (R89); roasted pumpkin with curried fritters, labneh, and ginger (R64); and beef tartare with black bean hummus, kimchi, and fried brussels sprout (R80).  We chose a main course as a starter, an open lasagne with mushrooms, with vichyssoise as a sauce, and topped with crispy Parmesan (R98).  I remembered a similar dish but with a 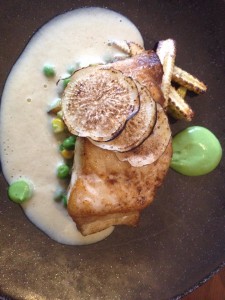 different sauce which Chef Annemarie used to make at Burrata in winter. The sauce was heavenly, and the mushrooms used were exotic ones. I chose the pan-roasted linefish on this menu, also kingklip, served with an oyster velouté with turnips, sweetcorn, and peas (R147), a lovely medley of tastes and textures.  Other main courses are braised lamb neck with Jerusalem artichoke, garlic, and baby carrots (R165); beetroot risotto with goats’ cheese, fennel, and orange peel (R92); and venison loin with orange sweet potato, puy lentils, pickled cucumber, and cranberry jus (R172).  We picked up the odd typo on the menu.

We had not planned to have a dessert, as the two courses were more than filling, but Matteo 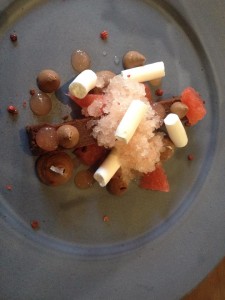 insisted on Neil’s behalf, so he chose the complimentary dark chocolate torte with grapefruit gel and granitee, dark chocolate crèmeux, and cute meringues that looked like sticks of chalk for us to share (R64). Both Whitney and I picked up a salty taste to the dessert, but we could not identify where it came from, Chef Annemarie explaining that salt crystals had been sprinkled over the dessert. Other dessert options are buttermilk mousse with lime parfait, coriander emulsion, and rye crumble (R52); baked cheesecake with lemongrass foam, coconut soil, and sour cream (R62); aniseed panna cotta with guava and fennel compote, poached guava, and almond crumbs (R55); and walnut and banana bake with Dulcey crèmeux and banana sorbet (R60).  The Pastry Chef is Christine de Villiers, who previously worked at The Tasting Room, from where Chef Annemarie had come as well when she joined Burrata three years ago.  When Matteo sees me, he offers me a dry cappuccino, knowing exactly how I like it, and I had a perfect one when we arrived.

The winelist is extensive, as can be expected, given Neil’s passion for wines, and his role as sommelier, being Chairman of the South 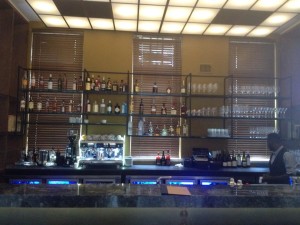 African Sommelier  Association.  Only six wines are offered by the glass, in a range of R45 – R60. Sparkling wines are by L’Ormarins (R240), Klein Constantia (R450), Domaine Des Dieux (R340), and Klein Optenhorst made by Pieter Ferreira (R350).  While wines have been sourced from a broad range of local regions, Constantia wines are particularly visible on the white wine side of the list.  Seven wines from France, Spain, and Italy are available, ranging from R500 to R4200.

We were impressed with the smooth operation of Open Door, so soon after its opening, and reflects the tight-knit teamwork which developed with Chef Annemarie, Matteo, and Neil having worked together at Bocca since its opening last 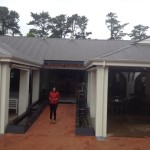 year.  New staff were trained at Bocca and Burrata, and this is a bonus too. Neil and Matteo made regular visits to our and other tables, constantly checking that everything is to the guests’ satisfaction. Branding is barely visible on the building, but this is still to come.  Neil is adamant that this is it, and that a fourth restaurant is not (yet) on the cards!