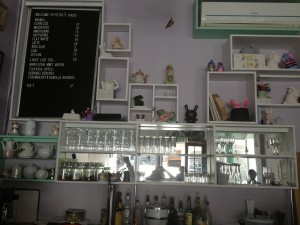 On Saturday I visited new restaurant Peter’s House just off Kloof Nek Road, and was surprised that there was no ‘Peter’ at the restaurant.  The waiter explained that Peter Rabbit is the hero of the restaurant, being the favourite character of its owner Ziggy Francisco.  My first impressions were not positive, but speaking to Ziggy later that morning and again early evening, improved my experience of the restaurant.

Peter’s House is a tiny restaurant, with an eclectic mix of furniture which Ziggy said were family hand-me-downs, and which she re-upholstered, mainly using a lilac fabric.  She also wore a lilac top, and the walls are painted a lilac colour, Ziggy admitting that it is her favourite colour.  The crocheted chair and cushion covers were done by Ziggy, and they give the restaurant a less professional feel, looking untidy.  Ziggy admitted that she loves to crochet.  At the counter the bar chair seats are covered with leopard print.  A long church pew runs along one wall, and few of the chairs and tables match, giving a homely student digs feel.   On the tables are old fashioned tea cups, in which cacti have been planted. On the shelving behind the counter is a collection of Ziggy’s personal Peter Rabbit items, including a complete set of the Beatrix Potter books, rabbit figurines, and 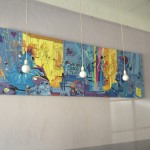 interesting tea pots, which she bought on eBay. An interesting looking teaspoon chandelier, which Ziggy found in Scarborough, attracts attention near the counter.  A collection of portraits covers a section of the wall close to the counter. Two very large artworks by graphic artist Luis Tolosana are for sale, one of them being a reflection of the view from his kitchen (photograph).  The interior is hot, the fan over the door not coping when the sun bakes onto the restaurant windows in the late afternoon.  One 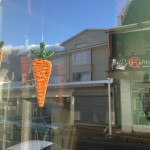 restaurant window has a collection of beaded carrots, while the other has the restaurant name sandblasted on the window.  The restaurant is difficult to find, officially being on Kloof Nek Road, but it is wedged between the pharmacy and Miller’s Thumb, across the road from Power & Glory, from which came shrieks of cheering from a sports broadcast.  Two wire bunny shapes are a trellis for creepers outside the door.

Ziggy shared that she knew what look and feel she wanted to create for the restaurant, but struggled to find the right name.  The Peter Rabbit theme leant 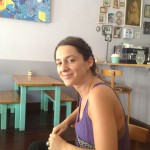 itself to her establishment, as she loves drinking tea and eating healthy food.  She grew up in Cape Town, worked in Financial PR before leaving for London, where she worked in the same field for five years. A two year sabbatical, travelling around the world, led her back to Cape Town, with the idea of opening her own restaurant.

I had arranged to meet Johan Bamberger and William Baldie (a breeder of rabbits), themselves restaurateurs, and we had a lot of catching up to do.  The music was blaring, and as we were the only customers, we asked the waiter to turn down the volume.  I enjoyed the iced coffee, which simply was an espresso with ice blocks, and cold milk on the side, as well as the Red 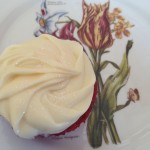 Velvet cupcake, which Ziggy told me her mother bakes.  William and Johan had the carrot cake (R25), and more and more I picked up the Peter Rabbit connections 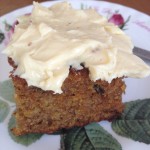 on the menu, but there wasn’t much more than that, other than ‘Rabbit Food’ (breadsticks, crudités, olives, feta stuffed peppadews, and a selection of homemade dips, costing R35), and ‘Mr Mcgregor’s (sic) Garden Salad’ (mixed lettuce, feta, cucumber, cherry tomatoes, and carrots, costing R40, to which can be added smoked salmon and avocado, or roast chicken, at an extra charge). The bill reminds one to ‘don’t forget to eat your Carrots!’ Cute is that the menu says that ‘No bunnies were harmed in the making of this menu‘! 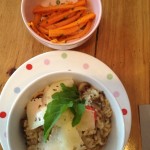 costing R30), and Breakfast Burrito (scrambled eggs, bacon, fried peppers and onions, with tomato salsa, costing R45).  Wraps cost around R50, and one can choose between ostrich, vegetarian, and smoked salmon and herbed cream cheese. Sandwiches made with homemade bread are affordable at around R30.  The dinner menu has most of the starter dishes and salads from the Lunch menu, a number of sides (I loved the glazed carrots at R15), and a choice of six ‘main meals’, including a surprisingly good wild mushroom risotto, oven roasted chicken, spaghetti meatballs, a pasta dish, and ‘Jou Ma se Fishcakes‘, costing around R65.

In addition to paper lunch and dinner menus, a board on the wall advertises specials, which was Alfredo pasta (R45), and Quiche and salad (R35) on Saturday.  The weekly special is the Meatless Monday Macaroni Cheese for R25.  On Thursday and Fridays from 16h00 – 19h00 they offer the ‘High Tea for Hooligans’, consisting of a Rooibos Tea Sangria, savoury treats and cookies, for a mere R25.  On Wednesday it is ‘Hump Day’ at Peter’s House, offering two pasta dishes and two glasses of wine at a total of R120.  A board lists the wine prices, a small collection of affordable wines, some offered by the glass and bottle: the house white wine costs R20/R80, the red wine costs R25/R100,  Anura Sauvignon Blanc 2012 (R25/R100), Quando Rosé 2012 (R28/R110), Robert Alexander Merlot 2011 (R130), and Miss Molly Cap Classique from Môreson (R180).

Peter’s House is quirky, with its decor focus on Peter Rabbit, but the menu does not carry the theme through well enough.  One wonders if the theme is attractive to adults, the first ‘The Tale of Peter Rabbit’ 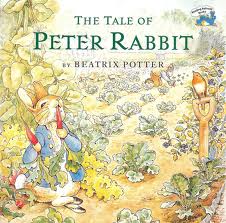 by Beatrix Potter having been published in 1902.  The energy and efficiency definitely is improved when Ziggy is there, coming over to chat and checking that everything is to one’s satisfaction. Prices are extremely reasonable. Parking could be difficult to find during the day.  Dinner seems a better option, judging by the menus.