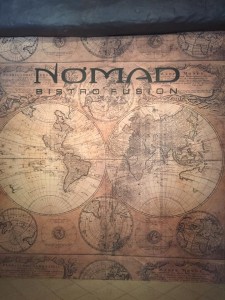 I had seen on Twitter that the restaurant had opened in what was previously a betting hall, and popped in five days after its opening, to try it as a new breakfast option. Waterkant Street is a pedestrian lane, so one must park on Loop or Long Streets. There is no signage on the building, just a blackboard with the brand name outside a large looking space. Two staff stood at the entrance, chatting. As I walked in, very friendly owner Mohit Sureka got up and greeted me by 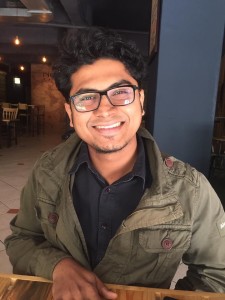 name, recognizing me from the Cape Town Restaurants Facebook page.

Mohit told me that he and Mardia Swartz, his head chef, are the partners in the business. Both of them have traveled around the world extensively, and hence the Nomad restaurant name was born. Mohit has studied at the University of Mumbai, his Facebook profile shows. I was unable to meet Chef Mardia, as she was spending the weekend in Johannesburg, odd to do so five days after opening, I thought. Mohit told me that Chef Mardia was previously from Johannesburg, having studied at the Prue Leith Chefs Academy, and has worked in Tanzania and Europe.

I liked the wallpaper created for Nomad at the back of the restaurant, the only classy aspect of the interior. Mohit told me proudly that he 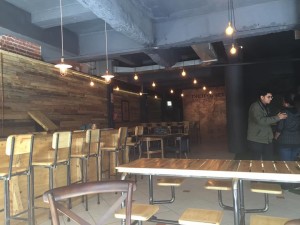 works for a packaging company in Atlantis (he appears to be a Chartered Accountant), and he was able to utilize left-over crates to use as cladding for the walls of the large space. Walls that have not been clad have been painted in blue and grey. Mohit told me proudly that all furniture is made from recycled wood. In the bathroom I saw a creative use of a wine vat, a washbasin built into one. In the restaurant vats serve as high tables too. The other tables are made from pine and oak. A beer bar, as well as a wine and coffee bar are planned. Mohit plans to offer coffee tastings. Peacock offers 80 coffee blends as well as 120 loose-leaf teas. Mohit told me proudly that Jarryd’s uses Peacock too. Gauze serviettes are offered. There are no placemats. No-name pepper and salt grinders are on the tables. Sugar sticks are in a metal ‘beker’. Cutlery is by Fortis Hotelware.

Odd is the ‘decor’ touches in one section of the restaurant, with clocks and compasses, supposedly related to travel and the nomadic theme. In one section is a rough brick wall. The ceiling looks rough, should one look up. Impressive is that there are 14 under-counter laptop plug points in the restaurant, indicating that the restaurant wishes to attract business persons.

I liked that Mohit said that they serve breakfast until 15h00 every day, and that he would try to keep away from offering pizzas and burgers. Yet he planned to offer Flammkuchen, a Hungarian/Austrian flatbread with sweet or savory toppings. 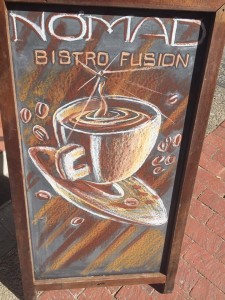 on Facebook, including free coffees for ladies on certain days!  They tasted 15 coffees, and chose three Peacock blends in the end, an African, a Guatamalian, and a Mexican one. Mohit lamented that their Barista had walked out the night before, an early teething pain in running this business. We have seen on Facebook since my visit that the head chef has left as well, and that Chef Richard de Wet is now in charge of the kitchen. I recognised waiter Farai, who was previously at Maggie’s Café.

Nomad plans to use well-priced local sustainable ingredients, none of which will be imported, Mohit said. They are currently waiting for their liquor license. There was no kitchen in the space previously, and consultant George Louis designed it for them. I ordered Oeufs en Cocotte, with two 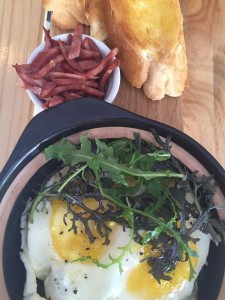 baked eggs, crème fraîche, baby spinach, and mushrooms, with chorizo shavings on the side, as per my request (R60). Something in the dish tasted sharp, but the Sous Chef Zinobia said that there was no chili in the dish. The dish was accompanied by buttered baguette, which I would have preferred to have buttered myself.

Mohit insisted that I order another dish, which 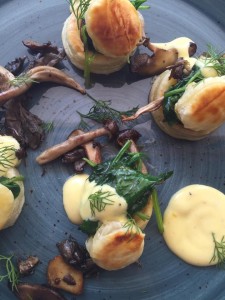 he wanted to comp, so I chose a mushroom vol-au-vent, also from the breakfast menu, at R45. It was prepared with sautéed mushrooms, roasted peppers, spinach, dill, and Hollandaise sauce. The pastry casings were small. The mushrooms tasted sour, probably having fermented. I could not finish them due to the off-putting taste. Other breakfast options were a basic breakfast with two eggs and toast (R28), up to a full breakfast with eggs, bacon, mushrooms, and lamb sausage (R60).  Croissants with jam cost R30. Eggs Benedict on Rösti costs R60. Omelettes cost R45, filled with Gruyére and basil, and served with a salad. Brioche, baguette and three cheeses, with homemade preserves, costs R60.

There were only three main courses on the menu, costing R55 (for zucchini ‘pasta’), R65 (for moules ‘mariuiere‘ (sic)), and R80 for organic lamb and wild mushroom risotto. There was only one dessert on the menu, being Crèpe Suzette, at a reasonable price of R45. Mohit gave me a rough copy of a menu to come, but without prices, main course options being expanded to include lamb ragoût, pork shank, smoked trout, and five flatbread options. Two further desserts will be Lindt dark chocolate mousse, and Apple Tarte Tatin.

I had an uneasy feeling while eating at Nomad Fusion Bistro, especially on the food side, with an absent chef then (who appeared to not have returned from Johannesburg after I was there) and now departed chef. It would probably be a gamble to order any main course dishes, and probably is more suitable as a coffee shop for the staff of the many offices in the area.