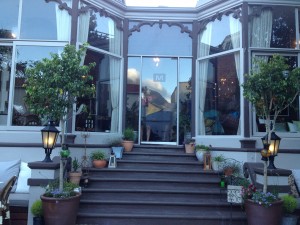 On Thursday evening Katie Friedman from Orphanage Cocktail Emporium, Veronica from Blog ‘Mother City Magic‘, whom we had met at Cape Town Active’s Twitter and Blogger Meetup at the Hilton Cape Town, and I tried out Kloof Street House.  Relative to what I had heard about the restaurant and bar since it opened about six weeks ago, we were very pleasantly surprised about the food and service quality.

The building has a history of fine and less fine restaurants, including Manolo and Opal Lounge.  It is a most beautiful building, hidden on Kloof Street. It has an attractive location in that it offers free parking behind the building, which many do not know about.  The interior walls have been removed, to open up the front rooms, creating a free flowing space which can seat about 80 patrons inside, and 70 outside when the south-easter wind is not blowing.  At night it is hard to photograph, 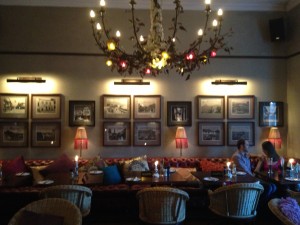 as the lighting is very low and soft to create a romantic atmosphere.  There are candles everywhere, on the table as well.  Each wooden top table had a red rose in a vase too, ours looking a little past its sell-by date.  Wicker chairs are not very noticeable in the low light, but were comfortable. Goldcrest black pepper and coarse sea salt grinders are on each table.  The tables do not have table cloths, and it was a surprise to have a cheap paper serviette when everything else in the restaurant is done with class.  The outside chairs are the same as those at The Grand Café.

The staff is casually but neatly dressed in their own clothes, but all wear an apron, so that one can recognise their role in the restaurant.  We were lucky to receive good service from Bayley, who had worked at the restaurant for the first time that evening, having moved across from owner Paul Hetreed’s Asoka bar and lounge a little higher up in Kloof Street on that day.  We were not able to obtain much information about the British chef Oliver Simpson, and his previous restaurant experience.  Managers Duane and Juan were in the background, but Juan came to the table regularly, and offered us complimentary desserts.

The menu and ‘wine menu’ are printed back to back on recycled paper.  The ‘starters and sharing plates’ were so attractive that we ordered from this selection only, skipping the main courses.  Veronica and I 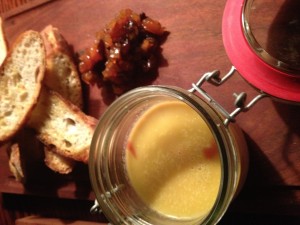 both loved the chicken liver parfait which was served in a glass jar and was offered with a generous portion of Melba Toast as well as the most delicious pear and raisin chutney, an unusual but successful pairing, served on a wooden board (R55).   The tempura asparagus was a generous portion of long stemmed asparagus, in a crispy batter, served with an unusual soya mayonnaise dipping sauce (R60).  Katie chose Shepherd’s Pie beignets, served with pea purée and lamb jus. Her white onion soup was added at the table from a tea pot to a bowl containing chorizo pieces and a poached egg (R50). The starters are well-priced, and two of these are a perfect meal.  One can also order calamari, white fish brandade, whole baked Camembert, 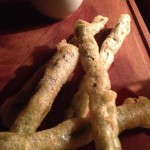 The desserts cost around R50, and sounded interesting 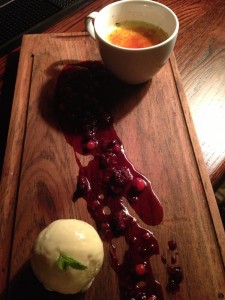 too, especially the Black pepper and vanilla semifreddo with strawberries and balsamic, and the baked peanut butter cheesecake, which Veronica ordered. One can also order chocolate fondant, and vanilla creme brûlée, served on a board with berry compote and a surprise orange ice cream.

The wine menu does not detail the vintages, but the regions are listed. Bubbly options are Graham Beck Brut or Brut Rose NV, at R42 per glass for the former or R210 per bottle, and R290 for the latter, and Veuve Cliquot Yellow Label (R950) and Rosé (R1200).  Twelve white wines are offered, mainly Sauvignon Blanc and Chardonnay, ranging from R125/R35 for Waterford Rose Mary to R200 per bottle for Cederberg Sauvignon Blanc. It is fitting that Tamboerskloof’s Kleinood Shiraz (R225) is stocked, due to the restaurant’s proximity to the suburb.  The sixteen red wine prices range from R140/R40 for Thelema Mountain Red to R430 for Meerlust Merlot.

Kloof Street House could become a regular, with its interesting and reasonably priced menu mix, its good food presentation, generous portions, more than half of its wine list being served by the glass at reasonable prices, its friendly efficient staff, and convenient off-street parking. 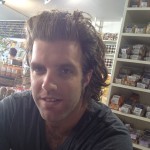 POSTSCRIPT 20/1: By chance I met Paul Hetreed, the owner of Asoka and Kloof Street House, at Melissa’s on Kloof Street this afternoon, a gentle young man, Camps Bay born and bred, who is passionate about his restaurants, saying ‘I love my job’!. He assured me that linen serviettes are to come.  He was offered the Kloof Street house building lease by its owner Leon Fortis, who also owns the Asoka building, reflecting that he has a good relationship with his landlord.  He proudly told me that Asoka was ranked 50th in the World’s 50 Best Bars 2012 in the world and Best in Africa and the Middle East by Drinks International.  Chef Oliver Simpson worked with him at Asoka for a number of years, now moving across to Kloof Street House, and Oliver and Paul developed the menu together.  It reflects the casual dining and sharing of cocktails and dishes they want to encourage, and are offered at reasonable prices.  There is a definite twist of differentness in many of the dishes in what they are served with.  Paul admitted to initial teething problems, but feels that they have been addressed, and we certainly did not experience them three days ago.  We laughed about him being so young and not having a Facebook page or Twitter handle for Kloof Street House.  He explained that he wants a dedicated Social Media and PR person, and wants to build a solid base for the restaurant before it is launched officially.  His philosophy is: ‘put love into your venue and you will reap great rewards’.

POSTSCRIPT 27/8:  A quick early dinner stop this evening almost went badly wrong when the hostess was unable to allocate a table (I had not booked, arriving just 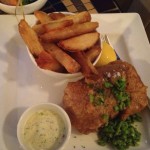 after 18h00, and only two tables were occupied in the restaurant at that time), and the Operations Manager Lizelle Graaf was very rude (she used to be the Operations Manager at Beluga, the unprofessional behaviour of that restaurant being well-documented on this blog and elsewhere).  Luckily Manager Chris was able to step in and offered excellent service.  The beer battered kingklip with mushy mint peas, chips, and tartar sauce was exceptionally good.

POSTSCRIPT 29/8: The interaction with the less than competent hostess/waitress Chido led to an 11-Tweet rant from her.  Our grateful thanks to Manager Chris Zoeller for getting it removed. 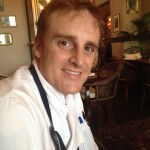 POSTSCRIPT 15/11:  Lovely late (and very long) lunch with Maki today, who had a huge milestone to celebrate. New Operations Manager Radley Dijker introduced himself.  We met the new Chef Richie Tewnion, who moved across from Woodcutters Arms in Hout Bay a month ago, and has worked for Jamie Oliver as Sous Chef at FIFTEEN in London.  We were impressed that he came to introduce himself, and came back to the table for feedback.  He is introducing a revised summer menu tomorrow.  We shared the 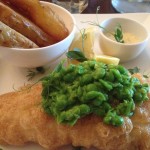 Chicken liver paté with the most delicious pear, apricot and raisin chutney, and each had the beer battered fish and chips, a much improved plating compared to the last photograph (above)!