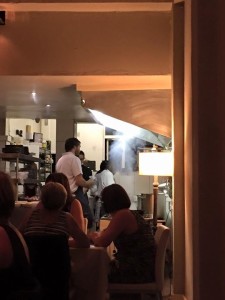 Of the four top restaurants I ate at in Johannesburg last week, the Cube Tasting Kitchen was the one I knew least about, it not having made the Eat Out Top 20 Restaurant Finalist list ever, yet is highly regarded by Johannesburgers.

Telephonic bookings are not preferred, I sensed when I called. I had to provide email and phone details, and the booking was confirmed in writing, and a menu sent in advance, so that I could advise my dietary requirements. The menu covers a two-month period, and the only thing I could not imagine eating is eel, so requested a replacement of this ingredient. Instructions re payment were confusing, the R700 cost for the 10 course ‘Tasting Progression’ to be paid by means of a bank transfer, or at the restaurant. A day before the booking date, but not seen by me as I did not bring my laptop with me, was an emailed booking reminder. What I was not told beforehand was that the signage of Cube 1 and Cube 2 on 4th Avenue in Parktown North had been stolen from the building, and that it therefore has become a secret venue amongst other restaurants. My guest house hostess had warned me, otherwise I would not have found it. The arrival time was clearly indicated to not be before 19h00, and it was communicated that the meal takes about three hours.

I was told that owner Dario d’Angeli had been on an 80 Bites Tour around the world. On Times Square he was fascinated by the cube building in which Apple operates, and was inspired by this building shape when he opened his new restaurant in Johannesburg five years ago. He could not find a cube-shaped restaurant space, so settled on a rectangular one, and found a second in the same building, each seating about 25 patrons, and each having two chefs preparing the same ten courses. Each of the Cubes have three posters on one wall only, three ingredients photographed close-up in one Cube, and three Namibian desert scenes photographed close-up by Chef Dario. Each of the restaurants, with low lighting, evolves into the completely open well-lit kitchen.

I was close to walking out, finding the first interaction with a staff member with a name list on the pavement very abrasive and without a greeting. All he wanted was my name, so that he could direct me to the correct restaurant. I was shown to my table by Roché, the Restaurant Manager, and I asked her if I could take my photographs in the kitchen. She looked shocked, asking if I am a reviewer. She did make an arrangement with Head Chef Darren O’Donovan for the photography, and the two chefs were most accommodating in this regard, calling me to the kitchen for each of the ten dishes. There is no welcome, no introduction to the menu or how things work at Cube, and I had to request a menu for Tweeting, which I could not do, given that they do not offer Wifi! Cube is not licensed, so one is encouraged to bring one’s own, and the menu commendably recommended a wine varietal for each of the courses. All wines brought along were placed on a central table, which one’s waiter managed from there. Roché brought me a menu, printed on plain A4 paper, when I requested one.

The table was covered with a tablecloth, and the decor is minimalist: three sets of knives and forks and one spoon were set up on my left, which would prevent any cutlery stretching, a clever move. A tea light candle was lit, and a material napkin was provided. Chairs were a mix of moulded  plastic and leather, all in white. The splash of green in the logo on the menu is not replicated in the interior. The door to the street was closed after we had arrived, and thus made it very hot inside, the open cooking adding to the heat. Two waiters served seven tables, but their duties were to clear the plates, add or remove cutlery, to refold the serviette when patrons leave the table, and to top up the drinks. I found it hard to understand the waiter when he explained which type of salt was on the table, being black crystal charcoal salt. I was offered a choice of still or sparkling water, but requested it from the tap.

It was a welcoming touch when I was addressed on one of my trips to the kitchen by a patron called Lorna, who is a fellow member of the Facebook page ‘Cape Town Restaurants: The good, the bad, and the nastyyyy…’ and recognized me from the page. She was also visiting from Cape Town.  Most of the dishes were brought to the table by Chef Darren, and he was 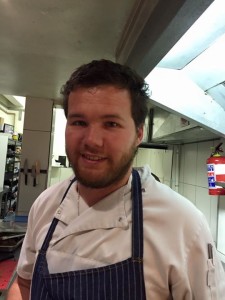 very patient in detailing all the ingredients for me, given the pressure that he had to go back to the kitchen to prepare the next dish on the menu. He provided snippets of information during the course of the evening. One of my first questions was why they have not been recognized by Eat Out, and he said that they do not chase awards, but are happy if they come their way. I had referred to them achieving ‘Highly recommended‘ in Rossouw’s Restaurant Guide 2016. 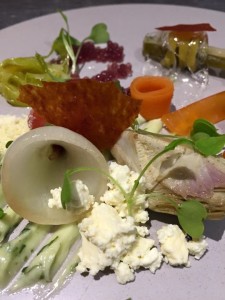 Each dish has a title, but on looking at the whole menu, one could not see a link between the dishes. There were Asian-inspired dishes, and one Argentinian dish. The first course was called ‘A salad inspired by a Mediterranean summer‘, and was a modern twist on a Mediterranean salad, Chef Darren explained. It consisted of artichoke, tomato leather, olive caviar, feta crumble, cucumber, capsicum, basil, rocket, pepper spaghetti, and red onions, and the suggested pairing was a Sauvignon Blanc. I liked the presentation on a grey flat plate, which meant that the cutlery could not slide off it, as often happens in restaurants.

The second course was called ‘Ravioli’, and it contained rather odd 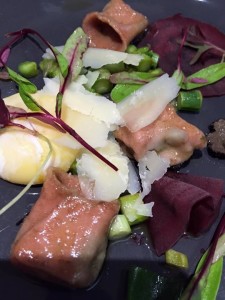 -looking chewy pink tortellini filled with goat’s milk cheese, with a soft poached egg yolk, spinach, beetroot carpaccio, truffle shavings (first experience ever), Parmesan shavings, and asparagus salsa. Chef Darren suggested that I break the yolk, to allow it to create a sauce for the other ingredients. Chablis was the wine pairing recommendation. It was the second time on the same day (also at DW Eleven-13) that a dish was served on a brown plate with white edging, from a range called Zhoozsh! by Jeremy and Jacqui Mansfield, clearly the Johannesburg alternative to our Cape Ferreira and Gers! -The third course was the one which contained the eel, and was called ‘AVP….?’, referring to a movie ‘Aliens versus Predators‘. I had not heard of it before. Chef Darren had a note about my eel exclusion, and added an extra lobster tail on my plate. An interesting ingredient was bone marrow, accompanied with Szechuan pepper, Asian notes, edamame purée, pickled radish, sautéed mushrooms, Japanese mayonnaise, beetroot, a sesame salad, and nougatine. The dish was served on a slate plate.  The wine pairing suggestion was Blanc Fume. Chef Darren told me that the patrons generally are brave about eating the eel, enjoying its taste.

The fourth course was unusual, and the first Asian touch, being 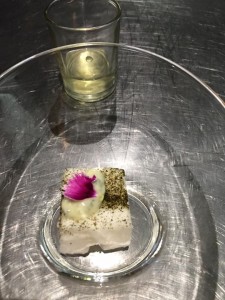 a cuisine break and palate cleanser. ‘Green Tea Gimlet’ was described as consisting of bubble tea, which was a large gel one had to break inside the glass to drink it, served with a green tea sponge, salted mint and yoghurt, and sprinkled with green tea dust, a refreshing touch.

Course number five was called ‘Street food’, and necessitated using chop sticks. It was served in an Asian steam basket, which opened up into a silver dish looking like a 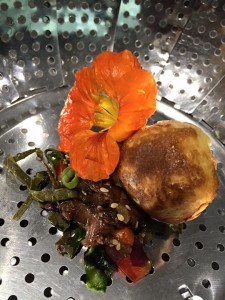 colander. On a seaweed grapevine leaf base was placed braised short rib, Japanese barbecued, and a steamed dumpling Tokoyaki filled with Asian mayonnaise. A nasturtium flower rounded off the dish. Chef Darren said that they grow vegetables, edible flowers, and herbs at a Parktown North school nearby, and the project doubles up as an educational one, so that learners can experience where these come from.

The main course, an Argentinian 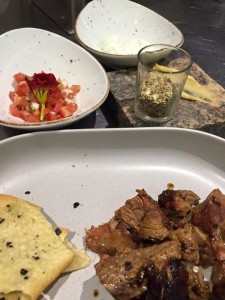 Asado, was massive, one dishing up for oneself onto a slate plate from bowls brought to the table, with very soft and tender lamb, delicious tzatziki, smoked hummus, dukkah spice, tomato salsa, and crispy but tough herb flatbread. The two chefs came around to the tables, checking if we wanted more. The wine pairing was with a Syrah Mourvedre Grenache blend. 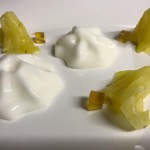 ‘Sydney Food’ was the name of the first dessert, but the meaning of its name was not explained. Chef Darren referred to it as a ‘cheese course’, it consisting of ricotta, sour-tasting rhubarb, stewed apple, sweet honey ice cream, and 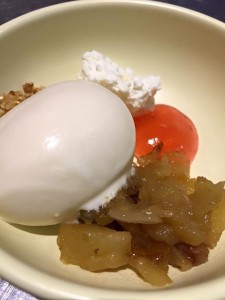 Course number nine, ‘Strawberry, Tonic and Herbtanicals’, consisted of different strawberry textures, macerated, as a gel, in a tart, as a mousse, and dried,  served with 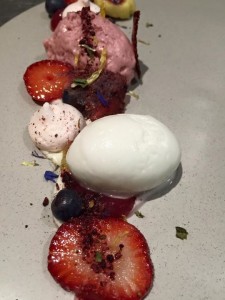 mini meringues, camomile, blueberries, and a sorbet made from an imported artisanal tonic, decorated with fresh herbs and flowers, and served on the flat grey plate again, a good background for the pink strawberry elements. The suggested beverage pairing was Tequila.

The last course was a fun reflection of ‘#Chefslife’, which the menu explained as ‘A smoke… a drink… A Coffee and some chocolate‘. Chef Darren and I spoke about the movie 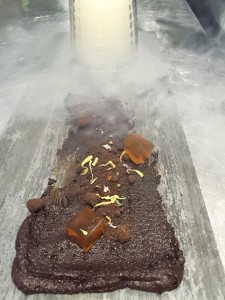 ‘Burnt’, and the dish seemed a mild reflection of a chef’s life compared to what the movie reflects. A coffee order had been taken during the 9th course, and it arrived on a slate plate perfectly timed for the last course. The dessert was a coffee and chocolate mousse smear on a slate plate, with chocolate soil, Amaretto jelly chews, and a chocolate truffle which had been smoked with beechwood and which arrived at the table smoking in a glass, created with liquid nitrogen!

Chef Chadea du Preez works alongside Chef Darren. Both she and manager Roché came across as more friendly as the evening progressed, and I was impressed when Roché offered to show me the other Cube, and then asked her security man to accompany me in walking to the guest house I was staying at around the corner. Cube comes across as full of rules and regulations, which can be off-putting, but when the restaurant got going, things relaxed and got more friendly, largely driven by Chef Darren, who did not seem to stress at any stage of the evening. The interior became smokey at times from the kitchen, despite the massive extractor. Jazz seems to be a Johannesburg standard, which I experienced in all the restaurants except at Mosaic. Commendable was the post-dinner questionnaire sent by email for feedback. l am happy that I stayed, to experience unusual cuisine and an unusual and unique dining experience not matched in the Cape.