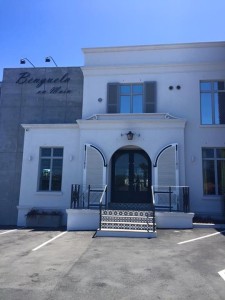 An immediate point of difference is the French Sommelier Denis Garret, who acts as Group Sommelier for the Benguela Group (they have a pop-up restaurant at the Benguela Cove property at the entrance to Hermanus too). Sommelier Denis appears to mainly work at Benguela on Main for the dinner shifts. On Wednesdays he hosts Winemaker Lunches, by introducing a winemaker to restaurant patrons. Sommelier Denis is a very overpowering person, I have been told, that one loves or hates! Benguela on Main is the only Somerset West restaurant with a sommelier,  which should give it an immediate edge to join the Eat Out Top 20 Restaurant shortlist later this year. Not only can one taste the Benguela Cove wines, but one can also buy them at cellar door prices.

But it is not just the Sommelier edge of the restaurant, it is also the young and creative chef team in the kitchen, driven by Chef 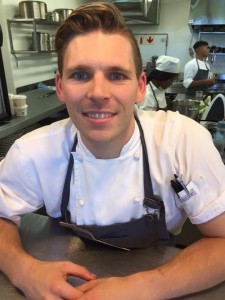 Jean Delport. He was previously at Equus, working alongside Chef Henrico Grobbelaar, leaving Cavalli Estate when Chef Henrico left. He also has worked at Terroir and at Rust en Vrede. It is nice to see that Chef Jean and his team have developed their own creative cuisine presentation, rather than continuing with the plating style of Chef Henrico, something we have seen amongst chefs who worked with him in the past. I went to chat to the chef team after the main course, and they told me that some of them grow vegetables for the restaurant at their homes, reflecting great dedication to their job and to fresh produce.

Another important player in the Benguela family is its owner Penny Streeter OBE, who is reported to be one of England’s wealthiest businesswomen, running her medical recruitment A24 Group in the UK and in our country. She was awarded the OBE in 2006. She bought Benguela Cove Lagoon Wine Estate in 2013. She saw the opportunity to offer tourists traveling between Cape Town (odd is that Somerset West is referred to as the Cape Town branch) and the Garden Route opportunities to eat and taste her wines. She also owns Lakeside Lodge near Sedgefield, which has a Benguela Brasserie & Restaurant. More Benguela properties may be on the cards, it was intimated. Penny was the interior decorator, I was told, enjoying it, and gold/yellow clearly is her favorite colour!

There is not much parking space on the property, the original Genevieve restaurant having been taken down and rebuilt as a double story building, and is more functional than attractive from outside. Driving from the Cape Town side one might not see the restaurant, as happened to me, but I noticed the building and signage across the road, which is another property Penny bought to serve as offices and to provide ample parking. One’s heart sinks when one first sees the building, thinking that it is the restaurant! A big black board outside the restaurant building advertises platters and wine pairings, ranging in price from R35 to R180, which cheapens the image of the restaurant. 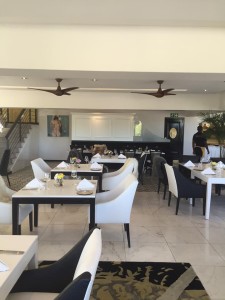 Stepping inside, the restaurant is one large open space, the bar area being separated by a wall, with a piano visible too. I did not see the open plan kitchen to the far right when I arrived. I was welcomed by Manager Gert van Rooyen, who says he grew up locally to Dutch parents, and a light Dutch accent comes through. He worked on cruiseships as well as at Asara. Floor staff wear black shirts and pants, with a … gold… apron and tie! The carpet seems modern and hotel-like, but is largely hidden by the tables, but I could see that it too is gold-dominant. Curtains are more yellow than gold, and a wall near the staircase to the Tasting Room upstairs is completely covered in gold glitter, leading some to say that the restaurant feels kitsch. It did not bother me too much, the food quality being superior. Large Floris van Zyl paintings cover the walls. Inappropriate I thought, in this terribly hot summer, was the animal skins placed on at least one chair per table! Big brown fans hang in the centre of the restaurant give a plantation feel. Music was heavy jazz, and too loud, which thankfully was toned down when a couple entered to do wine tasting upstairs.

I was in desperate need for a charging point for my phone, so that I could take photographs, which Gert organized for me immediately, being alongside one of the tables. I was concerned that I was the only patron in the restaurant for a Saturday lunch, but did not mind the service focus as a result.  Each waiter apron ‘advertises’ a different Benguela Cove and its secondary brand Matilda’s Secret variety, with a brief description embroidered in gold on the back of the waiters’ shirts, unfortunately lost on one if one does not know the Benguela Cove wine portfolio!

The menu is affixed to a … gold… menu holder, and the Benguela Cove logo is in gold on the menu! The menu invites one to communicate allergies and dietary requirements. Tables do not have tablecloths and have white-painted tops and black legs, and chairs are white ostrich leather with black legs. The napkin is material, and the cutlery is imported Sola. Ceramics are by trendy Diana Ferreira. Floor tiles are marble. There is one porthole window, looking lost in the vast space which offers seating for 60 patrons. Each table had a vase with brownish and … gold… chrysanthemums! Banquettes have been spared the golden touch, being black/blue.

My waiter introduced himself as Ryan, and reminded me that he had served me when he worked at Camphors at Vergelegen. Unfortunately I could not understand his pronunciation of the French name 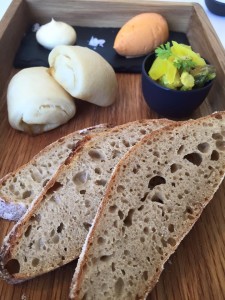 of the sourdough bread in the well-presented bread box, which was filled with steamed onion rolls, a container of pickled yellowtail (good yellow colour, and a very South African touch), lard butter, and sundried tomato butter. Ryan took my order, but did not enter it into the tablet which was dangling at his side! 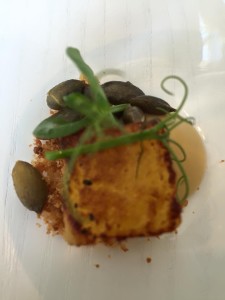 Ryan presented an Amuse Bouche of sweet potato fondant, sweet potato purée, pumpkin seeds, soil, and decorated with a pea shoot. In writing this, the colour of the Chef’s ‘gift’ became evident to me as another touch of gold! I ordered the excellent creamy chicken
liver parfait, which was plated with Fromage Blanc sourced from Buffalo Ridge in Wellington, grape gel, a (golden) quinoa crisp, raisins, and a dried raisin purée (R70).  I had requested that the onion bread served with the starter be substituted, and the kitchen sent it with brioche. Other starters 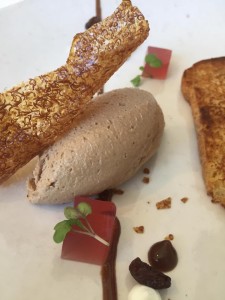 As my main course I had ordered pan-fried Kroon duck breast with confit of duck leg, confit potato, carrot purée (another gold touch I thought, as I 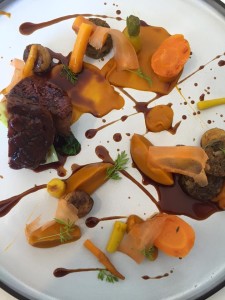 typed this review), bok choy, Chinese 5 spice, and assorted colors of carrot (R185).  Waiter Ryan asked me twice, once during my meal and when he cleared the plate, how I had enjoyed the dish, a little overkill. The plating was creative, but one of the two duck breast slices was overdone relative to the perfect pink of the other slice. The Diana Ferreira plate was perfectly suited to the dish, with a flat base and lip, one not battling with cutlery falling into the plate, as is so common these days!  Other main course options was a vegetarian eggplant and mushroom dish; pan-roasted yellowtail with sour squid; Springbok rump, whisky, and spätzle; and grass-fed beef sirloin and braised tongue.

The dessert of a blueberry and coconut mousse, blueberry cheesecake ice 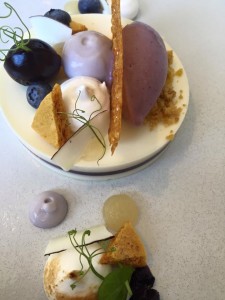 cream, honey comb, soft meringue, coconut shavings, steamed raisins, and a berry gel was superb (R85). There was no gold in this attractive and unusual dessert at all. One can also order lemon custard tart with clotted cream; chocolate marquise and ice cream truffle; as well as a cheese and preserve plate.

When I asked for the bill, Ryan brought two small Apple profiteroles, an unusual and tasty last touch before leaving the restaurant. The departure took some time, 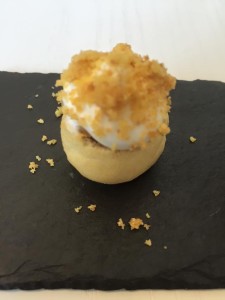 as none of the credit card machines would work, despite my credit card having more than enough money in it. But finally it did work!

One can order a Tasting Menu of seven courses for R550, or R800 with wine pairings, none of which are Benguela Cove wines. The whole table must order the Tasting Menu.

The mark-up to order a bottle of wine in the restaurant is 100%, but for wine purchases cellar door prices apply. Benguela Cove cellar door wine prices start at R90 for Sauvignon Blanc, R128 for a Semillon Sauvignon Blanc blend, R140 for Chardonnay, R160 for Merlot and Shiraz, Pinot Noir costs R165, and R170 for Cabernet Sauvignon. Noble Late Harvest costs R230, and the Bengula Cove Extra Virgin olive oil R120.  The Matilda’s Secret Sauvignon Blanc, Rosé, and Red all cost R65. Tasting is charged at R50, reimbursed if one buys wine for R150 or more (does not apply to food and wine pairings). Free deliveries of 12 bottles or more are made in Cape Town, Hermanus, Somerset West, Stellenbosch, and on the Garden Route. There is an unforgivable typing error on the Cellar Door price list, which should have been picked up and corrected.

I will certainly return to Benguela on Main, its location on the Cape Town side of the town being a big benefit. I was surprised that Gert left me with Ryan for most of the meal, and did not attend to my table, rather chatting at the pass. I was not 100% happy with Ryan’s service and dish knowledge, and I detected a note of arrogance from him. I also did not like being called ‘my dear’ by the young lady in the central reservations who took my booking! 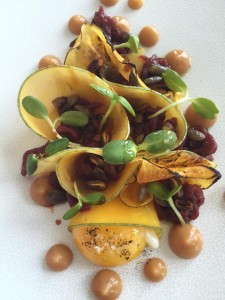 POSTSCRIPT 27/1: Today I returned to Benguela on Main, meeting my sister for lunch. Sommelier Denis Garret did not know who I was (we are Facebook friends), not even when I gave him my name and Blog name. Manager Gert was ill, so another staff member stood in for him. He only led me to our table, and did not visit us again, only seeing him as we left! Our waiter Ryan was off as well, so we were looked after by ‘Jack Black’, who said that he was previously a court translator before joining Benguela on Main. He was very pushy, almost wanting to force me to try the bread, which I had eaten 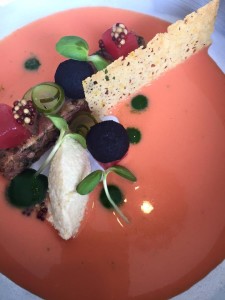 on my last visit, and had not changed since then! Denis told me that the Winemaker lunches are held once a month, and that the next one will be  on 26 March. He is busy compiling a wine list of French wines, he told me. I was very impressed that my feedback above about the skins placed on one chair per table had been heeded, and removed! The music was also far more toned down. I had not booked, so they did not know that I was coming. I had not noticed on my last visit that the

side plates are almost gold in colour too! We were served an Amuse Bouche, even though we only had a starter and a dessert because of time constraints, which was Buffalo mozzarella, nectarine, and basil salad. My sister had a most beautifully plated ostrich tartare, Farmer Angus egg yolk, miso, and pumpkin starter, while I ordered chilled watermelon soup prepared in Gazpacho style with cream added, ham hock as a type of terrine, celeriac, spinach, and 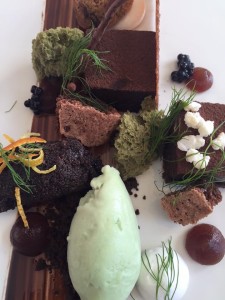