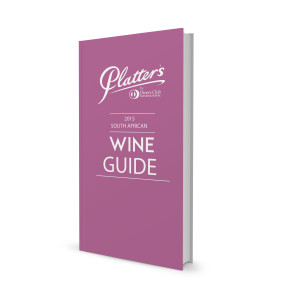 The 2015 Platter’s Wine Guide was launched at the Belmond Mount Nelson Hotel last night, in a Beaujolais Ferment colour, with a number of changes in terms of its methodology to evaluate the 5 star wines,  as well as in the content of the Wine Guide. Out of 6000 wines submitted for evaluation, a total of 50 wines and one brandy received the highly desired 5 star rating. The Platter’s Winery of the Year is Sadie Family Wines, the second time that Eben Sadie has received this accolade.   DeMorgenzon Reserve Chardonnay 2013 was named the White Wine of the Year, 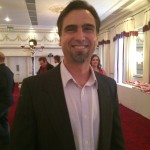 and De Trafford Blueprint Syrah 2012 was named the Red Wine of the Year.

The first Platter’s change is that JP Rossouw has been the new publisher for the past year, looking confident last night, relative to his first more restrained presentation a year ago.  It was nice to see former publisher Andrew McDowell present and look as charming as ever. 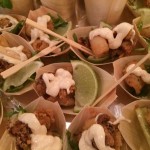 The second Platter’s change was the launch venue, having been The Vineyard hotel for many years, but always at the cost of limited parking and is a cramped venue.  The Belmond Mount Nelson Ball Room seemed massive by comparison, and we were welcomed with a glass of Graham Beck Blanc de Blancs 2009, and canapés, which kept coming out of the kitchen, and included dim sum, chicken curry, hot dogs, prawn tempura, and battered calamari.

While we were waiting for the proceedings to start, I met a Stellenbosch University lecturer Richard John Barnett, who had entered the Platter’s competition to correctly guess the colour of the 2015 Platter’s cover, for which he won an invitation to attend the launch, and a bottle each of the Red Wine and the White Wine of the Year.  He could not be persuaded to divulge the winning colour, until we were shown it by JP.  The cover colour is an annual change, but a closely guarded secret. The cover highlights further changes, the name of the publication having been changed to ‘Platter’s by Diners Club 2015 South African Wine Guide’, from ‘Platter’s South African Wines’ in the past.  The typeface has changed, and the emphasis now falls on the Platter’s branding (and surprisingly low key Diners Club branding), and on ‘Wine Guide‘.

Given further changes, it is a surprise that the 2014 and 2015 Platter’s have exactly the same number of pages, just short of 650. Content changes include the exclusion of all Restaurant and Accommodation  listings, which had formed part of Platter’s for a long part of its history. Now these listings have been moved to the Platter’s website.  The typeface used inside the Guide is more legible. Another content change is that all descriptions of listings for wines achieving 3 stars or less can be found on the Platter’s website too.   A new Platter’s iOs app is to be launched in December.   The presentation style changed as well, the photography of each award winner having been moved to the end of the proceedings, making for a much sharper shorter event.

JP explained the 5 star evaluation, which had been criticised last year for 81 entries receiving the accolade. The drop to 51 is dramatic, and was achieved by a more stringent judging process, the 200 potential five star wines suggested by the judges 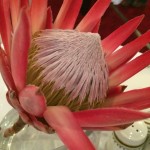 being evaluated blind in groups of three judges, judging 35 wines in a particular category.   Two roving chairpersons, Cathy van Zyl and Michael Fridjhon, assisted with the judging, ensuring that the final 51 wines selected as 5 stars were truly exceptional.  JP and I chatted about the wine producers who did not enter this year, including KWV and Ultraliquors. JP is working on KWV, and is confident that he can encourage them to enter in future again, particularly given their excellent awards performance this year to date.  Previous judges Christian Eedes and Michael Fridjhon withdrew from Platter’s as judges this year due to work pressure, but did participate in the blind judging of the 5 star wines.

In the Platter’s introduction wine-related trends are identified, which include an increasing number of high-end, small-volume, and niche wines; own-label bottlings coming from larger cellars; exciting new wines being made from vines 35 years and older;  greater emphasis on ‘keep it simple‘ winemaking;  ‘Chenin Blanc continues its strong comeback‘; greater focus on sustainable and ethical practices, and transformation programs; food and wine pairings in restaurants and in tasting rooms are on the rise; and Social Media in many instances is the medium used to launch new wines and new vintages. 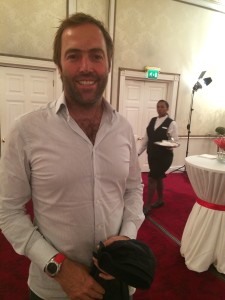 Platter’s salutes Sadie Family Wines, which achieved the accolade in 2010 as well, as ‘prominent role players in the influential Swartland Independent  Producers organisation’… and ‘as producers of consistently superlative wines‘.   They achieved three 5 star wines in this Platter’s. Owner Eben Sadie used the Olympics as an example, and asked wine drinkers to try 4½ star wines too, as they often are hidden in the shadow of the 5 star wines.  The DeMorgenzon Reserve Chardonnay 2013 is the White Wine of the Year, and was created by 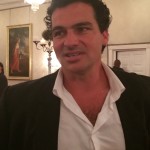 Cellarmaster Carl van der Merwe adding the 2013 Chardonnay to its prestige Reserve range.  The Red Wine of the Year is De Trafford Blueprint Syrah 2012, and was made by David Trafford using natural winemaking, being spontaneously fermented, and aged in older barrels. 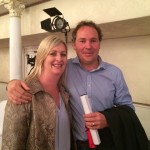 route. It is nice to see that the good work being done by Creation Wines in making the wine route more visible has been rewarded with a 5 star rating for its Reserve Pinot Noir 2013.  The 51 Platter’s 5 star wines are the following: 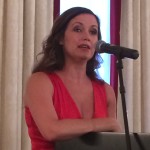 as being ‘interesting to work with‘. She praised his attention to detail, his tenacity, his integrity, and striving to do what is right, therefore making him the perfect publisher.  JP said that 6000 wines were evaluated in total.  Diners Club has food and wine in its DNA, he said.  Today Diners Club announced the Finalists for the 2014 Wine Maker of the Year.