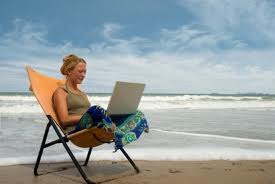 One of the last pats on the back which former Cape Town Tourism CEO Mariette du Toit-Helmbold and PR and Communications Manager Skye Grove gave themselves before leaving the tourism organisation at the end of July was the coverage by the New York Times of the international travel bloggers’ week-long visit to Cape Town a year ago, proudly reTweeting the article.  It appears that they did not read the (long) content of the article, it delicately questioning the ethics of travel blogging by travel bloggers in general, and by those bloggers who visited Cape Town.

We were very critical of the attention which Cape Town Tourism paid its visiting bloggers in July last year, which was preceded by a #LoveCapeTown campaign on Twitter, Capetonians being asked to recommend interesting places for the four bloggers to visit during their week-long stay.  However, the campaign was deceptive, in that the itinerary of the bloggers had been predetermined, clear to see from their websites, in which they highlighted what they looked forward to seeing in Cape Town and surrounds.  The most controversial aspect of the travel bloggers’ visit was the measurement of the value of their input, which was measured in claimed millions of ‘impressions‘, a measure not used by bloggers nor heard of in South Africa previously, and was found to be questionable when researched on Google.  Even Anton Groenewald,  City of Cape Town Executive Director of its Tourism, Events and Marketing directorate and funder of Cape Town Tourism, questioned the impression value calculation.  This measurement was trumpeted in media releases by Cape Town Tourism, but was received with a ‘so what’ response, given that the bulk of the ‘impressions’ was created by Capetonians.  We had discovered that ‘bloggers’ 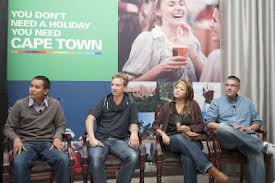 The New York Times article reveals that Jenkins approached Cape Town Tourism to find sponsorship for their weeklong stay in Cape Town (he has an iAmbassador agency that negotiates sponsored trips to regions he and fellow bloggers want to visit), and the team received sponsorship to visit Cape Town to the value of €5000 (R50000 at the 2012 exchange rate), which Cape Town Tourism no doubt will have obtained from its sponsors (e.g. accommodation from Nox Rentals in Camps Bay, meals, flights, transport, shark diving, winelands tours, spa treatments, visits to Robben Island and Table Mountain, and the services of a tour guide).  What is not revealed is whether the four bloggers were paid for their services too.   One wonders if the sponsors received value for their services, in that it became evident that not all the four travel bloggers blog regularly, and that their ‘blogs’ are more digital travel magazines.  The four writers appeared to be microbloggers, mainly Tweeting, especially whilst in the Cape.  The newspaper referred to the ‘success’ of the campaign as follows: ‘The tourism office later told him that he and the fellow bloggers he’d invited had kicked off its most successful social media campaign to that point, featuring a Twitter hashtag — #lovecapetown — that is still in use‘.  The newspaper was misinformed by Jenkins, as it contradicts itself in stating that Jenkins and Böcher have invented a measurement technique to calculate the value of a social media campaign such as that generated by their visit.  It was the first social media campaign of Cape Town Tourism, so the success evaluation is misleading, not the first time that we have seen this from Cape Town Tourism. Also, it was the bloggers’ ‘impressions’ measurement calculation, not that of Cape Town Tourism!  The bulk of the Tweets about Cape Town were by Capetonians, who are not the target market of the city from a tourism perspective.  The #lovecapetown hashtag is no longer used.

The ethics come into play in that the New York Times quite rightly asked how travel bloggers who receive everything for free deal with this on their blogs/websites, and whether they declare these ‘gifts’ in their Tweeting and travel reporting, stating: ‘But as travel blogging comes of age, the landscape has become vastly more complicated and more fragmented. It can all be daunting — and increasingly difficult for both bloggers and readers to navigate.’   The travel blog ethics article continues that travel blogging does not pay well, but is critical of Jenkins: ‘Most bloggers, though, are not making money hand over fist — even those like Mr. Jenkins who do take generous perks‘.

Travel blogs are praised for being more useful than out of date travel guides and the controversial reviews on TripAdvisor.  ‘But they also face unique challenges; for one, they have to be not just their own editors in chief, but also their own directors of marketing and Web developers. And, ideally, they need to stay objective despite all the sponsorships’.

‘Mr. Jenkins believes that there are three phases of “creating buzz” for any travel blogging experience: announcing a campaign (often with a specific Twitter hashtag) before a trip, sending out Twitter messages and Instagram photos during the trip (again, with a consistent hashtag), and only then, after a trip has concluded, putting up blog posts‘.  This pattern was followed in the Cape Town trip, which led to confusion, as the bloggers wrote about Cape Town many months after their trip, and were already Tweeting about their next destination as soon as they left Cape Town.

Most newspaper travel writers would not accept sponsored trips, and now the American Federal Trade Commission has specified that sponsorship of trips must be disclosed, even stating that this should be near the top of blogposts or websites.

We revisited the blogs of the four travel writer visitors, to check their writing about Cape Town since their visit last year, and their disclosure policy:

*   Keith Jenkins, Velvet Escape:  Jenkins blogs erratically, seven blogposts having been written in 25 days so far this month.  In the past 13 months since his visit he has written only three blogposts about his week in Cape Town, being about the house in which they lived in Camps Bay, the Twelve Apostles Spa, and Bo Kaap, as well as a photo blogpost featuring Table Mountain.  His blogposts are mainly photograph driven, and most reflect a sponsored trip, but this is cleverly disguised with wording that does not directly disclose this, as this example of his recent blogpost about the Pilansberg National Park  reveals (note that iAmbassador is Jenkins’ company!) : ‘Note: my trip to South Africa was part of the #MeetSouthAfrica project, a collaboration between the South Africa Tourism Board (sic) and iambassador. All views expressed above are mine, and mine only’.

*   Melvin Böcher, Traveldudes:  He rarely writes, on average once a month, and has not blogged since April.  No declaration of sponsorship.  No writing about his trip to Cape Town at all in the 13 months since his visit!!

*   Nellie Huang, Wild Junket:   Erratic but regular blogging, having written 9 blogposts to date in August.  A total of 4 blogposts (about the accommodation in which they stayed, the Getaway Bloggers Conference, cycling in Masiphumelele, and visiting Cape of Good Hope – incorrectly described as the ‘southern tip of Africa‘)  and a ‘photoblog‘ of Table Mountain written about Cape Town in the past 13 months.  No disclosure about the sponsorship of the trip.

*   Matt Long, Landlopers:  He has been the most prolific writer, with a blogpost written every second day on average in August.  He  also posted by far the most blogposts about Cape Town compared to his three ‘colleagues’, but most are photoblogs (16) and five are short blogposts. Only the written posts declare the sponsorship of the trip by Cape Town Tourism.

While all exposure for Cape Town is deemed to be positive, it does cast aspersions on Cape Town Tourism for having ‘bought’ exposure from the four travel bloggers. The bloggers’ blogposts contain errors, which Cape Town Tourism did not pick up,and therefore did not have corrections made.  One wonders if their visit made any difference at all, and whether the  R50000 spent for the week created any return for our tourism industry, with only 12 superficial blogposts and 18 photoblogs being the result of the bloggers’ visit a year ago!