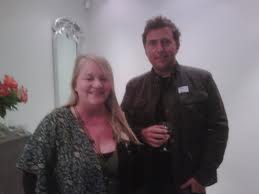 The past twenty four hours have seen bullying, bashing, and blackmail on Twitter, kick started by an abusive Tweet by über Tweeter Jane-Anne Hobbs Rayner, who accused us of ‘cyber bullying‘ her ‘friends’ Mariette du Toit-Helmbold (CEO) and Skye Grove (Communications and PR Manager) of Cape Town Tourism, supermarket wine promoter Michael Olivier, and Eat Out editor Abigail Donnelly!   Not only was her stream of Tweets disparaging, but she also blackmailed her 5000-odd Followers with the threat of being unfollowed!  One would have expected the New Year to have had a gentler start!

Hobbs is a ‘mommy food blogger‘, her Juno and now Scrumptious blogs having impressed in the past with the quality of her photographs, and portfolio of recipes.  In the time that we have known her, we have had little interaction, seeing each other at odd Franschhoek events (we know her mother and nice uncle).  She addressed the Food & Wine Bloggers’ Club two years ago, and she was so shy then that she refused to have her photograph taken, and kept apologising for her presentation, even though it was interesting and of value to the audience.   We have seen her come out of her shell, and she took to Twitter like the proverbial, becoming so vociferous that we had to unfollow her due to her continuous stream of inane Tweets, similar in volume to her ex-friend Sonia Cabano! Her level of confidence on Twitter grew as her number of followers grew, she had a book ‘Scrumptious’ published with Random House Struik, she became a Social Media Manager for Liquorice digital marketing agency, and Woolworths Pantry invited her to blog for them during MasterChef SA last year.

One day, out of the blue, she blasted forth about Michael Olivier, and admonished us for writing about his shenanigans as the co-creator (with David Cope, and later Clare and Eamon Mack McLoughlin) of the Whalespotter abuse Twitter account, on which we were cyber bullied for almost two years. Olivier’s Crush digital magazine was a non-event while he was in charge of it, as he had no experience in the field of publishing, and now is no longer involved in the food and wine magazine. We have heard that when Olivier saw our critique of Crush, he sent a number of bloggers and event organisers defamatory e-mails about ourselves, and encouraged them to not invite us to launches of new restaurants and wines, as he does not want to be in the same room as ourselves!  In most instances his pleas have not been entertained, and therefore he is rarely seen at industry events.

Our criticism of Abigail Donnelly is well documented, in demonstrating her bias in awarding Eat Out restaurants she has consulted to (Makaron), has worked with the owners (The Table at De Meye, The Test Kitchen), and in her Top 10 Restaurant list the past two years, for which she has been severely criticised.  What we have written about her handling of the Eat Out Awards, and the numerous faux pas she has made over the last two years (inviting Bruce Palling as a co-judge this year, selecting Saigon as the best Asian restaurant, adding The Pot Luck Club to the Top 20 shortlist when it had not been open for a full 12 months) not only reflects our observations, but also those of restaurant chefs and owners, for whom the Eat Out‘s Restaurant Awards have little credibility now.

Criticism about the poor quality marketing of Cape Town done by Cape Town Tourism’s Mrs Helmbold and Ms Grove is well documented on this blog, and includes sponsoring Claire (Mack) McKeon McLoughlin’s ‘100 Women 100 Wines’ competition for the past two years, Ms Grove’s handling the competition’s media coverage for her friends, extremely poor media statements riddled with grammatical errors and written in poor English, political games played, continuous Tweeting at the expense of most other marketing communication media alternatives, using personal Twitter accounts to communicate information about tourism events, interspersed with an increasing number of ‘mommy Tweets’ by Mrs Helmbold and personal gender preference Tweets by Ms Grove.  Despite severe financial strain which could lead to staff retrenchments at Cape Town Tourism due to the City cutting the tourism body’s Destination Marketing mandate and therefore budget, Mrs Helmbold has a rich enough entertainment budget to have entertained a number of friends unrelated to tourism, such as Hobbs, to lunch at Top 20 Finalist restaurant Bizerca Bistrot last month, taking her management team there too a week later, before she took off on a three week holiday, while Cape Town is bursting at the seams!

During the course of yesterday abuse was heaped on ourselves not only on Ms Hobbs’ Twitter account, but also on the Table Mountain Twitter abuse account, in which a number of Tweeters with whom we interact regularly were labelled as ‘enablers’, potentially implying them to be traitors.  After a strongly worded Tweet by Christian Smit, decrying the bullying and offering us legal contact details, the Table Mountain abuse account closed down very quickly, after having heaped abuse on ourselves for more than six months. We have reason to believe that Olivier (he started Whalespotter after all!), Cabano, and Hobbs have been involved in Tweeting for the abuse account, and we will be testing this with experts.  A defamatory blogpost by Emma Jackson, the V&A Waterfront’s Tweeter, was removed yesterday, within minutes after publishing it, with the intervention of the Waterfront management, we believe!  We have been promised by the Waterfront that Ms Jackson will no longer be harassing us on her personal Twitter account.

Twitter is an explosive minefield, and is an (at times too) honest expression of what people think about others.  It will not be surprising if legal action will soon be taken by those that use Twitter to express their abuse, especially if such Tweeters get slack about the legal implications of their defamation, which can be directly linked to them and to their IP address.  A retweet of a defamatory Tweet equally is defamation, and could also be subject to legal action.

Hobbs has an interesting sense of righteousness – her friends and she herself may abuse anyone else on Twitter, but when we write critically and honestly on our blog, always with justification provided, she labels this as ‘cyber bullying’.  We were delighted when brave Chef Cheyne Morrisby Tweeted ‘If anyone wants to unfollow me because I interact with Chris @WhaleCottage go ahead’, telling the abusive Tweeter to ‘get a life besides twitter’!  We couldn’t have said it better!  None of Hobbs’ threats will stop us from writing the truth, even if it is about her friends!  We invite Hobbs to challenge the correctness of what we write about her friends, if she feels so strongly about it, or to forever hold her peace!  We believe that Twitter should be for grown-ups, by grown-ups, and we thank all Tweeters who challenge Hobbs’ bullying threat of retaliation.

POSTSCRIPT 4/1: Sonia Cabano is threatening those who have Retweeted this blogpost with legal action for libel, despite her own flood of libellous Tweets in the past two years. She is as self-righteous as Jane-Anne Hobbs! She has expressed her intention to sue anyone and everyone.

POSTSCRIPT 14/1: Cape Town Tourism’s lawyers Webber Wentzel have sent a letter regarding references to Ms Grove in the blogpost and its comments.  One wonders why Cape Town Tourism, and therefore the City of Cape Town and ultimately the ratepayers, are funding what is Ms Grove’s personal issue.  It has nothing to do with her position at Cape Town Tourism!

POSTSCRIPT 21/1: Jane-Anne Hobbs has complained to our web hosting company about the use of her photograph (it was the most flattering we could find on Google Images), so we have removed it and replaced it with one of her and Mike Ratcliffe, taken at the Food & Wine Bloggers’ Club more than two years ago.  She also mentioned that ‘this blog post by the owner of whalecottage.com contains defamatory and untrue statements about me, but these are beyond the scope of this letter. I reserve my rights in this regard‘.  It is amusing that Hobbs can Tweet defamatory and untrue Tweets, and blackmail her Twitter followers, yet points her finger at us.  We feel that we were more than gracious in our description of Hobbs, despite her abusive Tweets!

POSTSCRIPT 7/8:   Über controversial Eat Out Top 10 Restaurant 2012 international judge Bruce Palling has left the Wall Street Journal Europe and has joined Perowne Charles Communications to set up its food and drink division.  ‘Palling will lead PCC’s account team representing well-known food and drinks brands, Michelin-star chefs as well as new launches, with clients including Epicure at Le Bristol Paris and Aziamendi at Iniala Beach House in Phuket‘.  Funny is reading the agency’s blogpost about Palling’s appointment, clearly written by him and how he quotes his Eat Out excursion in his ‘CV’!

18 replies on “New Year kicks off with Twitter bullying, bashing, and blackmail!”