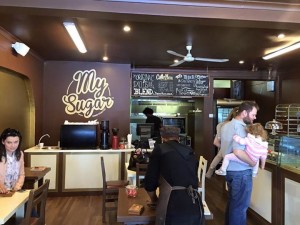 Although the name My Sugar suggests a venue of sweet treats, it is a chocolate haven first and foremost. It is not easy to find, but its brown canopies on Regent Road, diagonally opposite La Mouette, reflects the chocolate focus inside.

Tony Ward and I, as well as another eager client, waited for half an hour at an outside table, as the owners Asher 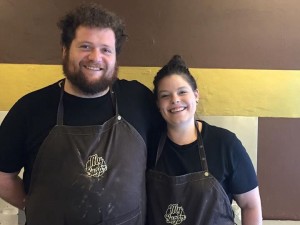 Isaacs and Kaylah Greenberg only opened at 12h00 today, to catch up on making chocolates, having sold out completely on Saturday and Sunday. They were overwhelmed with the demand, having sold 100 liters of milkshakes alone, and are grateful to Eat Out for spreading the word. They looked shell-shocked, not having experienced such busy weekend trade since opening four and a half months ago. Tony and I had not seen each other for a while, as he has been traveling, and I had no deadline for the day (a new luxury!), so it was no issue. We were served a cappuccino outside and the half an hour wait sped by. 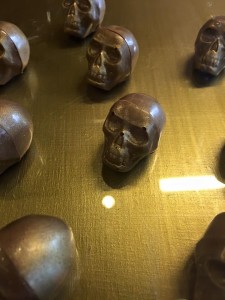 The interior as well as outside has a collection of brown and white-topped tables, while the woven straw-base chairs are white-ish with brown speckles.  The walls and ceiling are painted chocolate brown, with a paint effect of chocolate drops or bubbles in two corners.  Gold is used to lift and break the brown on the walls, and also in the chocolate display cabinets, showing off the chocolates well.

Asher explained the chocolate focus. Don’t expect cake, cookie brownies being the closest to cake.  Chocolates are made in two machines, one with white chocolate, 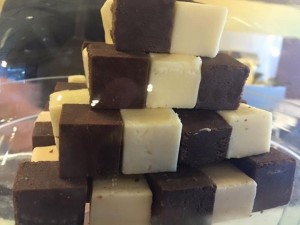 and the other with milk chocolate. They do dark chocolate too. They use Belgian chocolate in the making of their chocolates.

One can order coffees; hot chocolate made with melted Belgian chocolate; six milkshakes served in jars with a handle at a cost of R45 each (Miso Caramel, Cookie Butter, Super Chocolate, Caramelised Coconut, Coffee, and Butterscotch Popcorn which I ordered, photograph on the right below); Cake Jars at R45 each, with the choice of a Chocolate 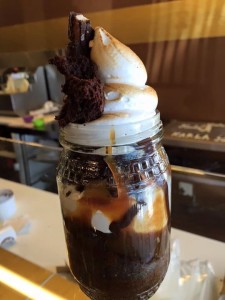 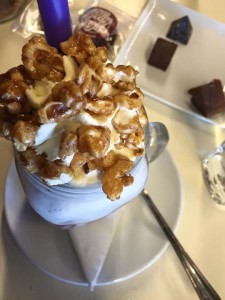 serve, covered in chocolate ganache and rolled in cookie crumbs; cookie brownies, being half choc chip biscuits and half brownies; and white and black fudge. Chocolate truffles cost between R5 to R25 a piece, the dark chocolate skull ones costing the most, and containing Jack Daniel’s ganache and tobacco caramel!

The chocolate enthusiasm oozes from both owners, and Kaylah especially seems to be thinking of new products to develop for their outlet, chocolate eclairs being a possibility.

Asher and Kaylah met four years ago, at a concert of the former band The Stellars, each of them knowing the band members but not having met previously. It took Asher three years to woe Kaylah, and their close connection is evident from our photograph. Asher is from Ficksburg. He started his career at a hotel in York in the UK, and then moved to Cape Town, where he worked at La Colombe for three years. During the move of La Colombe to Silvermist last year, Asher went to stage at Nurisawa, the world’s 8th Best Restaurant, and the Best in Asia. He returned to La Colombe as Sous Chef when they re-opened last year. He has never been a Pastry Chef or worked with sweet things before, he admitted. Kaylah comes from Johannesburg, and lost her mother whilst finishing school. She moved to her sister in Cape Town, studying cooking at Capsicum Culinary Studio, and took a specialist course there in chocolate-making, being grateful that she was one of only three students, in learning so much more. She taught herself a lot about chocolate-making when she ran a chocolate shop in Woodstock. Her experience at various Hudson’s branches was invaluable in opening My Sugar, she said.

They do not add sugar to their chocolates, but the chocolate itself contains some. They make sugar-free chocolates as well. The staff total, including the two owners, is four, and they are now looking for extra hands to help them with the production. They have had their own unique coffee blend created, and sell ground coffee from the outlet too. Asher and Kaylah were friendly and sweet, answering our many questions, and promising to call me when they are fully stocked again.