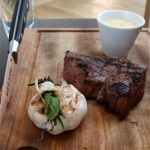 Since the opening of the One&Only Cape Town last week, Capetonians are coming to check out the hotel, and are having dinner at its two branded restaurants, Nobu and maze.

maze is a Gordon Ramsay restaurant, the first to merge maze Tapas and maze Grills, which are separated elsewhere in the maze world.    Sol Kerzner, the One&Only owner, encouraged Ramsay to add a South African touch to the menu.   The touch is most visible in the dessert menu.

But, to get to the beginning.   We had dinner five days after the opening day.  We were greeted with confusion as to what we should do with the car.  Mistakenly we had assumed we could just drive in at the low key entrance (at night), and a lit up One&Only sign was the only branding one saw upon entering the grounds, surprising for one of the world’s leading hotel operations.   The car problem was quickly solved, when it was valet parked, organised by a most impressive looking and charming doorman, wearing a waistcoat with leopard print over his smart black suit – it looked superb.   Unfortunately this dress theme was not carried through once one steps inside the foyer.  One’s first impression is the stunning chandelier in the Vista Bar.  The Bar has a magnificent view onto Table Mountain in the day, but it is not visible at night.   Staff were on hand, proactively assisting in providing directions for the two restaurants, to the left and right of the bar.

As one comes down the staircase to maze, a manager comes to greet his guests with the reservations list, and one is quickly seated.   The menu is cream-coloured, and its cover understated, with the zen-like maze logo on the outside.   The menu pages number three in total, with a surprising small selection of starters, mains and desserts.   The pleasant surprise was the affordability of the dishes – not inexpensive, but on a par with the more expensive restaurants in Cape Town:  R 160 for a 250 gram South African or Namibian fillet, Karoo lamb at R 130, kingklip at R 90, and dessert prices range from R 60 – R 90.   All side dishes for the main course are charged extra, at R 25 – at that price, the portion sizes are small.   Interesting is that a side order of bobotie can be ordered with one’s steak or fish.   In addition to chips, one can have side orders of sherry mushrooms, mash, braised carrots, french beans, etc.    We learnt that the signature dish of maze is the beetroot salad.

Staff in the hotel wear uniforms designed by local fashion designer Jenni Button.   A strong turquoise blue is used throughout – in the waistcoats of the bar staff, the ties of the male managers, in the scarves/sashes of the female managers.   The less blue the staff member wears in the uniform, the more senior he/she is.

The restaurant interior is very brown, earthy, chocolatey and darkish, with dark woods, and oval-shaped orange lights.  With only a little tea light on the table, it was very hard to read the menu.   Special clip-on reading lights are available, but this was not communicated in advance.   Turquoise is not reflected in the decor at all.   The restaurant carpet had massive geometric blocks on it – garish, hotel-like, but fortunately one’s attention is not on the floor.   Tables for two are on the side, with one person sitting on a fixed bench, not well matched to the height of the table, making this an uncomfortable seat.    The cutlery is beautiful and new, and no table cloths or overlays decorate the tables.    The use of slate as coasters and underplates is unusual but practical.

The winelist is impressive, with 35 pages of varietals of 150 international and  450 local wines, and more than hundred wines-by-the-glass.   Irritating for a winedrinker preferring wines by variety, is the winelist that is arranged by Wine of Origin region.   So, for example, one has to check every region to find a preferred Shiraz.  Complicating this further is the Wine of Origin grouping, so that  Boekenhoutskloof will be found under Paarl, and Franschhoek does not appear at all.   The prices are reasonable – R 590 for the Boekenhoutskloof Shiraz 2006, Meerlust Rubicon is available per vintage, ranging in price from R 560 for the 2004 to R 1 850 for the 1993.

If one compares the service from the superb One&Only sommelier Steven Towler with the waiters at maze, the former wins hands-down.  His personal approach,  extensive knowledge, and ability to assist in selecting a suitable wine could not be matched by his maze counterparts.   The recommendation of a Rijk’s 2004 Shiraz, which had been enjoyed by Nelson Mandela and Sol Kerzner at their lunch in the hotel last week, was spot on, and was priced at a reasonable R 320.   After the main course, a special invitation was extended to show the customers the Wine Loft, with 6 000 beautifully displayed bottles of wine on silver racks in a glass-enclosed space, with its own tasting table, and wines cooled at 18 C.   The cherry on top was the complimentary Joostenberg Chenin Blanc sent to the table with the desserts.

On the maze side, things were a little slow.   The crayfish starter, priced at R 65 per 100 gram, was beautifully presented on ice, with the meat displayed on the open tail.   It took an hour after the starter was cleared (2 hours after arrival) to be served the main course of a steak and kingklip.   The kingklip was very bland and boring, and served with the skin side up, not very attractive.  It had bones, which was an immediate no-no.   The steak was juicy and good, but served on a Spur-style wooden board that captures the juices.   The main course certainly was a disappointment, in terms of the reasonably small portions, and the bland display of the food, by comparison to the attractive presentation of the starters and desserts.

The dessert list is interesting, with unusual combinations, and almost overdone-South African touches (“melktert, pink grapefruit granite, lemon curd” and “malva pudding with poached apricots, gingerbread ice cream”).   The most interesting sounding dessert was the “maze peanut butter and cherry jam sandwich with cherry sorbet”.   A delectable range of sorbets (including lime, cream cheese, basil) and ice creams (including gingerbread, honey and milk, smoked salt and almond) can also be ordered, costing only R 15 for three small scoops.   The melktert dessert was disappointing, in that the milk part of it was soft and runny, and not set, as one is accustomed to in South Africa.  Ramsay’s chefs will have to learn how to make their South African dishes.

The maze waiters are supported by local waiters, and the gap between the service levels is understandable, and will need more training to reduce.   It was encouraging to learn that former Grand Roche sommelier, and ex-Steenberg and Singita staffer Kent Scheermeyer is the Food & Beverage Director of One&Only Cape Town.

The food preparation is largely done inside the restaurant, and electric equipment is used, sounding just like a vacuum cleaner, disturbing the ambiance of the restaurant.

The bill took a long time to come, and had a price error for the crayfish, it being charged at R 500 instead of at the R 130 for the 200 gram ordered.    It took two revisions to get the bill fixed to reflect the correct amount.

The cloakrooms are bizarre, with a glass panel on one wall, and blown-up photographs of a woman’s fishnet stockinged legs, plastered on all the toilet doors.   Bins holding the toweling cloths overflowed and only two of the nine toilets had toilet paper.

maze will improve, and needs to meet the standard of the One&Only Cape Town service levels as far as the wine side of the hotel goes.    Impressive was Assistant Manager Phillip, who came to the table, to request feedback about the evening.

The car was returned promptly, and ten out of ten for the driver for moving the seat back to its original position before getting out of the car.