I had forgotten how hard it is to stay on top of a new series of MasterChef SA, and last night’s first episode of Season 3 was disappointing in being mainly an hour long tasting of 36 angelfish dishes, for the first day of Bootcamp.  But the tough elimination challenge could not have been held against a more beautiful backdrop than that of Table Mountain, great marketing for Cape Town.  The dominance of Reuben Robertsons Riffel was disappointing, being the new judge.

In the previous two MasterChef SA Seasons, more time was spent in getting to know the contestants, when they had to do basic tests such as peeling  and cutting potatoes, and peeling and slicing onions.  Last night the hot auditions in Cape Town (with Chef Pete Goffe-Wood and guest chef Henry Vigar of La Mouette), in Durban (Riffel with Chef Jackie Cameron, who has just left Hartford House to open her Jackie Cameron School of Food & Wine) and in Johannesburg (Chef Bennie Masekwameng was joined by Chef Andrea Burgener, who featured in one episode in Season 2) were shown very briefly. The 36 contestants who made it through the 45 minute cooking challenge were given aprons to attend Bootcamp in the Cape Town harbour, alongside the Thorco Arctic ship.

The judges were introduced, Chef Pete Goffe-Wood and Benny Masekwameng needing no introduction, having been judges since Season 1.  Riffel was sold as a ‘superstar’, but the over-claim was not justified.   Chef Pete said that MasterChef SA was looking for the ‘Best Homecook’, a more realistic title than expecting them to be qualified chefs when the series ends. He also explained that

Cape Town lies between the Atlantic and Indian Oceans, served by one port, supplying the finest and freshest fish, which is why Woolworths is promoting its ‘sustainable seafood’ products, and it is becoming a policy by which we will all have to live, to ensure the retention of fish stock in the oceans.  The green list of SASSI is the only benchmark of choosing fish varieties to catch and to cook, just as we have been hearing on Woolworths-sponsored ‘Hayden Quinn: South Africa‘ in the past six episodes, making it overkill (pardon the pun) to get more of this from Woolworths twice a week!  Riffel was the Mr Know-it-all in the episode, despite it being his first episode, and he came across as the clever one with all the answers, Chefs Benny and Pete very much pushed into the background, no doubt due to Robertons’ sponsorship of the cooking series, and the very non-PC seasoning brand using Riffel as its spokesperson. The Robertsons endorsement and Riffel’s role as a judge is a conflict of interest in our opinion!  Funny is Riffel’s more polished English in the show, compared to his terrible pronunciation in the Robertsons TV commercials, which we know are three years old (the word ‘chips’ in particular), meaning that he must have gone for some elocution lessons recently!

A massive Woolworths branded wooden crate was filled with angelfish on ice, and it was quickly clear to the participants that they would have to clean and fillet the fish, starting with it from scratch, and then create a dish, within the 75 minutes they were given. The skin of angelfish is tough, and should come off, the judges discussed amongst themselves, and filleted, to prevent anyone choking on the bones.  A variety of dishes was made, including pan-fried, fish cakes, stuffed, in bobotie, steamed, barbecued, cooked whole, and served in Mauritian-style curry.  Robertsons spice and herb bottles were very visible on the cooking tops, more so than in the previous two Seasons. 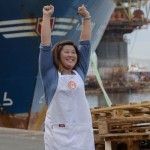 It was very hard to record all the names of contestants that made it into Bootcamp 2 for next week, as they were shown very quickly, and some were unfamiliar names.  Jillianne (left) was the first of the 36 contestants who was allowed through, having made steamed angelfish with squid ink noodles, highly 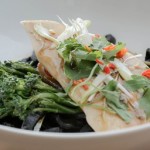 praised by the judges.  Some of the names I was able to pick up of contestants who went through to Bootcamp 2 are Siphokazi (a housekeeper who wants her own cooking show on TV), Ian, Francois, Melissa-Lee, Philippa, Penny, Roxi, Valerie (a 74 year old granny who made the bobotie), Abigail, Claire, Adele, Natalie, Belinda, Nthope, Ndumiso, Phila, and Refilwe.  As could be expected, there were tears from those that had to hand in their aprons and leave. 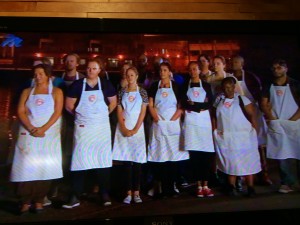 It was a delight to see that there are no known foodies or bloggers in the group of 25 contestants going through to Bootcamp 2, so that there can be no controversy as to favouritism shown by the judges to any specific contestant, as happened last Season, when Kamini Pather knew Chef Pete before the show.

Advertising was dominated by Robertsons, some TV commercials with and others without Riffel; there was little Woolworths advertising, and none as mouthwatering as we have seen in the past two Seasons; the Nederburg ad was boring; VW still tries to link its brand to food, with difficulty; a more Woolworths-like ad was flighted for smeg; Kenwood, and sponsor Tsogo Sun.  Quite why the OK, Double Velvet, a Red Bull event, 1st for Women, the Spur, Capitec, Hansa, electricity usage, and Outsurance were in the advertising mix is hard to understand.

PLEASE NOTE: The weekly Sweet & Sour Service Awards, usually posted on Fridays, will be posted on Saturdays until late December, to allow the write-ups of each of the 18 episodes of MasterChef SA Season 3 to be posted the day after the episode.

We are ready to serve you our delectable Anatoli M