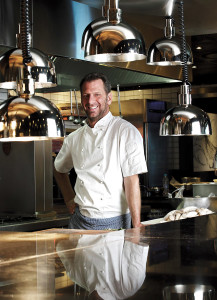 Talk about the clash of the titans in Johannesburg, when two of our country’s top restaurateurs battle it out for the custom and loyalty of the Johannesburg diner! Both Luke Dale-Roberts at The Saxon and Chef David Higgs’ Marble restaurants will open their doors in May, a more than bizarre ‘co-incidence’!

Luke Dale-Roberts at The Saxon opened at the boutique hotel as a pop-up restaurant late in January, and will close in two weeks time, it has been announced. The restaurant will undergo ‘extensive refurbishment’, and is to re-open on 5 May, the Manley Communications media release announced this week. Chef Luke’s wife Sandalene will be doing the interior refurbishment, with works by local artists Pete Eastwood and Mark Rautenbach, which already feature in The Test Kitchen in Cape Town. The dining room will be transformed into a ‘modern room embracing the South African aesthetic’.

Chef Luke has expressed his delight in opening permanently at The Saxon from May: ‘Obviously the expectations have been very high with the pop-up in Johannesburg. But, to be honest, I’ve absolutely loved the energy here. The guests are excited to be here, they’re chatting to people at other tables. It’s a space that’s fun, filled with energy and shared excitement’.

Saxon Hotel, Villas & Spa MD George Cohen said about the new restaurant:  ‘I’ve personally been a longstanding admirer of Luke’s cuisine and so the initial conversation and idea around The Test Kitchen pop-up in Johannesburg was welcomed with great enthusiasm. What we’ve tried to achieve with this collaboration, and the overall Saxon dining offering, is to bring newly inspired culinary concepts to Johannesburg. With the success of the current pop-up restaurant, the decision to create a permanent dining space with Luke Dale-Roberts continues the Saxon philosophy of offering unique guest experiences’.

I feel sorry for Head Chef Candice Philip, who was made the promise of stepping into Chef David Higgs’ shoes at The Saxon when he left in December, already having stepped back so that she could take over the kitchen in November to enable the restaurant to meet the Eat Out Top 10 Restaurant criteria. She continued operating five hundred for a month after Chef David’s departure, and now the five hundred restaurant brand is dead. Added to this is the one-month closure of the restaurant in April, which means that five hundred will never be eligible for the Eat Out Awards again.

Chef David Higgs has revealed information bit by bit about his open-fire Marble restaurant, also due to open in May, in Rosebank.  Chefs David and Werner, and co-owner Gary Kyriacou traveled to New York in October, to check out the cocktail and open flame cooking scene in that city, and Union Square Café will be their inspiration at Marble. A Cocktail bar will be an important part of the restaurant, which will have a roof-top terrace with a beautiful view over Johannesburg. A downstairs butchery will sell meat which diners will have enjoyed in the restaurant, to take home. Diners in the city look for more than just a fine-dining eating experience, wanting sophistication, affordability, and a welcoming atmosphere, especially for females, and they will find this at Marble.

So, what we know about Marble Restaurant to date is that it will be a 250-seater; is located on Jan Smuts Avenue 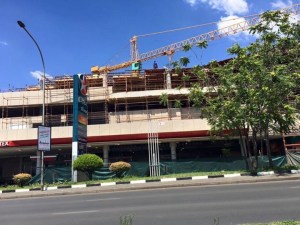 in Rosebank; that Chef Werner Spöhr (previously of The Saxon) will work with Chef David; a wine bar is to open too; it will be more affordable (relative to the country’s most expensive Luke Dale-Roberts at The Saxon); it will serve ‘easy eating’, ‘comfort food‘, and ‘good well-executed cocktails‘; they are bringing in a ‘beast of a piece of (kitchen) equipment’ from the USA; and that Chef David wants ‘to have a laugh and enjoy myself‘ with his new restaurant.

The Luke Dale-Roberts at the Saxon 7-course Tasting Menu (inclusive of two appetizers) is the most expensive in the country, at R1330, or R2100 paired with tea or wine. Open Tuesday – Saturday evenings. Bookings can be made at Tel (011) 292-6000.