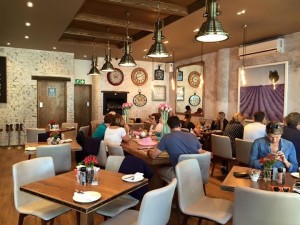 A week ago La Belle Bistro & Bakery opened in Mouille Point, next door to sister restaurant Pepenero, off Beach Road, bringing to ten the number of restaurants in the Kove Collection which have already opened, with one more to come in the V&A Waterfront.

Of the three La Belles (the other two are in Camps Bay, when Umi was divided in half and La Belle opened in one half, and in the Alphen Hotel), all belonging to the Kove Collection, the latter is the best run but also the longest-established. The new branch has the least good location as far as view goes,  looking onto a new block of apartments and a side road. It is not very visible, as the outside area was closed with a plastic canopy today, despite it being a lovely day. 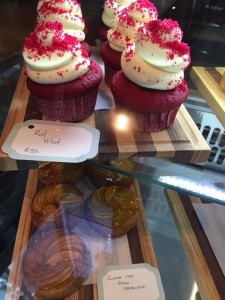 Like the other La Belles, a counter displays their baked items, either to order to eat there or to take home. Red Velvet cupcakes at R35 are pricy, and they 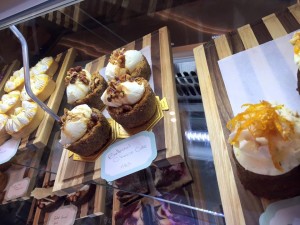 The interior is instantly recognizable, but the inside and outside sections are almost one, compared to the other two branches.  I landed up in the outside section, which turned out to one I had to share with a barking dog (he is such a cute puppy, its ‘mother’ told me ) and noisy baby, at two separate tables. On the Facebook Group page ‘Cape Town Restaurants – The good, the bad and the nastyyyy…’. I asked the question whether dogs should be allowed in restaurants after my visit, and the majority of the 124 comments said they should not! Municipal regulations on the topic appear unclear, and it appears to lie in the hands of the restaurant owner/manager as to whether dogs are welcome at a restaurant.

It took about 15 minutes for Karen the waitress to react to me, and to bring the menu. I explained how I would like the cappuccino, dry with espresso and froth without any milk, and requested a glass of water. After 15 minutes I had to chase both, Karen being the only waitress dealing with at least 10 tables in the outside section. Karen found an (unread) copy of the Sunday Times for me, so the half an hour wait for the Eggs Benedict with smoked ham and Hollandaise sauce on a crispy English muffin (expensive at R80 I felt) did not feel as 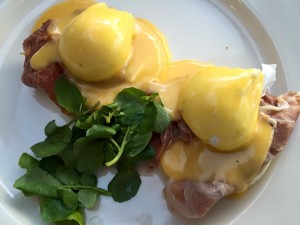 long as it was. I had to send it back, as the sauce was chilled, and when I asked the Manager to have it fixed, he told me confidently that it should be served cold! I received a replacement dish within 10 minutes. I was asked how the eggs should be prepared, had answered medium, but they were served well-done.  I explained to the waitress and the manager how to make the dry cappuccino, with espresso and froth, yet the cappuccino that I was served had milk in the coffee. I did not have the energy to have this remedied as well, and find their LavAzza coffee very weak.

I asked for the bill with a credit card machine, but the bill arrived on its own with a second one for another table.  I had to wait for another ten minutes for the card machine to arrive at the table for the payment. It was good that the Manager did not take any more patrons, despite not all the tables being occupied, realizing that his restaurant was out of control in terms of service.

The advertisement in the Atlantic Sun, to announce the new Mouille Point outlet, did not live up to its claim of ‘La Belle is a foodie’s dream‘ today! Breakfast is served until 11h30.