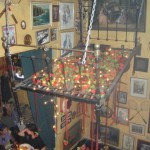 If one did not know differently, one could have sworn that one had travelled back in time a number of years to Loop Street, the first home of Madame Zingara, where “food showman” Richard Griffin ran a most successful restaurant until a fire forced him to reinvent his business, and the Madame Zingara Theatre of Dreams was born.   It was liquidated earlier this year, after the business expanded to London, and was caught short by the credit crunch.

Bombay Bicycle Club is a “reincarnated” Madame Zingara, located at the top of Kloof Street, opposite Bacini’s and in the building that was previously Amigo’s.  It is spread over three levels and eclectically decorated with bicycles, umbrellas, candles and plastic flowers, to create a lovely atmosphere.   Tables are close to each other, probably seating about 60 customers inside.   Our table was downstairs, and we were in the restaurant on a 29 C day.  It was very hot downstairs, but the staff quickly helped us by opening the windows, to let in a lovely breeze.    The seats facing the windows have a disadvantage, in that one is regularly blinded by oncoming traffic at the stop street across the road.   Flimsy curtains helped a little when they were closed for us.

We asked our waiter Johan who the owners were, but he did not know their names.   It was confirmed that Richard Griffin is in the background, and that all his staff, except newcomer Johan, are from Madame Zingara.    A belly dancer did the rounds during the course of the evening, another Madame Zingara touch.  The music is wonderful and builds up throughout the evening, a mix of music from the eighties and beyond.

The candlelight makes it difficult to read the menu, printed on a dark violet.   It devotes two pages to the background to the restaurant, but all is tongue-in-cheek, and nothing makes any sense nor tells one anything about the restaurant or its owners.  It describes the Bombay Bicycle Club as “the oldest gentlemen’s club in the world”, and the only serious message it has is “Please enjoy getting back on a bike as much as we have”, perhaps a lesson that Griffin has learnt, having gone though a liquidation.

The wine glasses are cheap and nasty, one size suits all for white and red wine.   The wine prices are very reasonable, at R 175 for the Hartenberg Cabernet Sauvignon, being the most expensive red wine, and the Footprint Shiraz the least expensive at R85.   The Groote Post Shiraz was out of stock, not acceptable for a very restricted winelist.  Luckily the Warwick’s Three Cape Ladies was a 2005, the other red wines tending to be very young.  The white wine prices ranged from R 75 for the Footprint Sauvignon Blanc to R 165 for the Jordan Chardonnay.

The starters range in price from R 35 for a Zuppa to R 49 for Kataifa Prawns.   The pear, cashew nut and brie salad had an unusual mix of ingredients, and was a generous portion, enough to share amongst our table of four.   Ten pasta choices are offered, the Salmone Mate’ being the most expensive at R 60.  Main courses range from R 65 for a roast vegetable bake, to R 115 for a fillet.   Our table had the bobotie, springbok shank, lamb tagine, and balsamic chicken, all served with vegetables and potatoes or sweet potatoes, and the portions once again were generous, therefore offering good value, given the reasonable prices. Each one of us was happy with our choices.

We were warned that the dessert portions were equally generous, and they were.   The Terciopelo Chocolate, Bombay Cigars and Pavlova were huge, and were equally enjoyable.  Desserts cost about R 35.

The criticism of the restaurant on restaurant review pages has been its smokiness (there was none, probably as smoking has been banned in the upstairs section due to the tougher anti-smoking by-law introduced recently, its poor service (Johan looked after us excellently), and its loud noise are completely unfounded.   We had a wonderful evening, and were filled with Madame Zingara nostalgia.   We will definitely go back.

The cost of a bottle of red wine, 2 beers, one salad, four main courses and three desserts was R 705 for a table of four.

Bombay Bicycle Club, 158 Kloof Street, Gardens.  Tel 021 423-6805.  Expect to have to book a few weeks in advance, especially over weekends, due to the popularity of this restaurant.