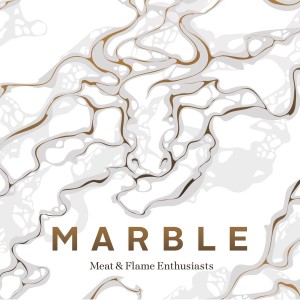 Chef David Higgs has been a real tease, revealing small bits of detail about his new restaurant, such as its location, its view, its restaurant inspiration, its offering in food and drinks, its opening date, its associated businesses, food preparation style, and its chef, in the past few weeks. On Monday he made the important announcement of the restaurant name being Marble, and that it will expand internationally over time.

What was meant to be a massive announcement of its name, and more detail than had been disclosed before, was unfortunately for Chef David overshadowed on Social Media on Monday by the magnificent announcement of the Michelin star which had been awarded to South African Chef Jan-Hendrik van der Westhuizen and his JAN Restaurant in Nice.

Given the emphasis on meat prepared on an open flame, Marble is an excellent name for Chef David’s new venture, and its logo reflects the meat link too, with a pay-off line of ‘Meat & Flame Enthusiasts’.  The media statement announced: ‘Higgs will be bringing the international trend of live fire cooking to Johannesburg’s dining scene for the first time. Marble, a celebration of quintessential South African fare and cooking on fire, will open its doors in the Rosebank Art Mile (Roam) in May 2016‘. His business partner is Gary Kyriacou, who has owned Spar outlets, and was involved in the hospitality program for the infamous FIFA World Cup Soccer in 2010. He is described as a ‘serial entrepreneur‘. ‘I have wanted to open something like Marble for a long time. However, I needed someone with a real passion for food to bring it to life. Once David was on board that the idea really started to take shape’, said Kyriacou.

Chef David explained the fiery restaurant concept as follows:  ‘Marble will embody South Africans’ love of cooking with fire, a quality that makes our food culture different from the rest of the world. I’ve long been fascinated by what makes South African fare unique, and I believe it’s down to us being meat and flame enthusiasts – the timeworn ritual of cooking on wood fires, and gathering with friends. That’s what Marble will celebrate – and not just meat, but all types of ingredients cooked on coals – including fish, poultry, vegetables and breads‘.

Chefs David and Werner, and Kyriacou traveled to New York in October, to check out the cocktail and open flame cooking scene in that city, and Union Square Café will be their inspiration at Marble. A Cocktail bar will be an important part of the restaurant, which will have a roof-top terrace with a beautiful view over Johannesburg. A downstairs butchery will sell meat which diners will have enjoyed in the restaurant, to take home. Diners in the city look for more than just a fine-dining eating experience, wanting sophistication, affordability, and a welcoming atmosphere, especially for females, and they will find this at Marble.

So, what we know about Marble Restaurant to date is that it will be a 250-seater; is located on Jan Smuts Avenue 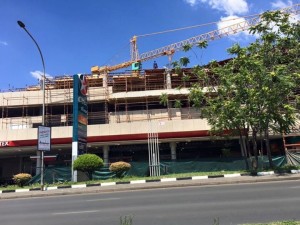 in Rosebank; that Chef Werner Spöhr (previously of The Saxon) will work with Chef David; a wine bar is to open too; it will be more affordable (relative to the country’s most expensive five hundred); it will serve ‘easy eating’, ‘comfort food‘, and ‘good well-executed cocktails‘; they are bringing in a ‘beast of a piece of (kitchen) equipment’ from the USA; and that Chef David wants ‘to have a laugh and enjoy myself‘ with his new restaurant.

Chef David left five hundred restaurant at The Saxon Hotel & Spa in December, after setting up the restaurant in 2012. He left a restaurant which has been ranked in the Eat Out Top 10 Restaurant list in the past two years, and the honour of being rated as our county’s Best Chef in 2014, the best ever performance for a Johannesburg-based restaurant! He took Rust en Vrede restaurant to the number one slot in 2010, and decided to make his way to Johannesburg. He expressed his frustration about the clientele he was serving at five hundred at the Eat Out Awards in November, and expressed his desire to see patrons understanding and enjoying his dishes!

The restaurant describes itself as follows on its Facebook page: ‘A space purely dedicated to precision and passion. Where the tradition of meeting and eating around an open flame is elevated to an art form‘.  ‘Joburg is hungry for something different, and we look forward to providing this in May 2016′, punned Chef David. Not satisfied with a Johannesburg restaurant only, they are considering future operations in New York, Dubai, or London, great aspirations for a restaurant that has not yet opened its local doors!

POSTSCRIPT 18/2:  Chef David Higgs has released another video about his new Marble restaurant, sharing that it will offer food and wine pairing, which will not be prescriptive. The planned Bar sounds impressive, being 8,8 meters long, with furniture by leading local designers.  It will serve tapas, cocktails, and beers.