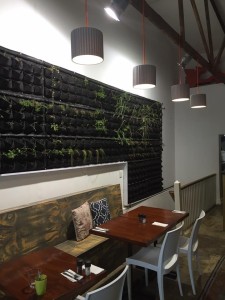 Last week I was invited to try Little Saint restaurant on Upper Bree Street, in the semi-detached section of Cape Town’s top trendy restaurant street. I was pleasantly surprised to find the first working herb ‘garden’ inside a restaurant. 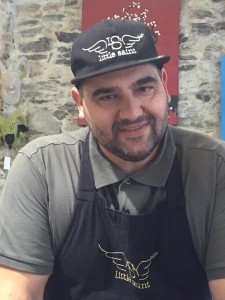 name Santiago, and his mother’s Santiño nickname for him, meaning ‘Little Saint’ when translated. Dominique and I laughed, in saying that Chef Santi is not little nor a saint! But their food is ‘saintly’, Dominique saying that it is clean and sustainable, and reflects the good healthy farm-to-table food they serve here. Whilst being suitable for vegans and vegetarians too, they do not want to position Little Saint as a restaurant for this segment only. They themselves eat ‘food for living‘, low in carbohydrates, and high in fats.

Santi lived in the UK for many years, but decided to come to Dominique’s home country last year, and to open their restaurant. Their motto is ‘food for living‘, and this reflects their focus on sourcing ‘sustainable, grass-fed, organic, fresh, free range locally sourced produce‘, so much so that they have dedicated one complete wall to a hanging ‘garden’ with herbs 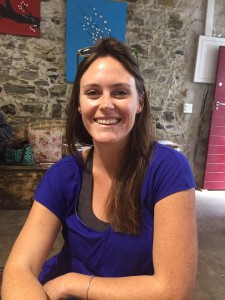 planted in pockets, a unique way of being self-sufficient as far as herbs are concerned. They use special grow lights, Dominique explained, the plant growth based on hydroponic principles. As a diabetic, Chef Santi cooks without using processed and refined sugars, and only uses the best coconut oil, butter, and olive oil, a promise made on their menu. They serve Breakfast, Lunch, and Dinner.

The Little Saint interior is informal, and Chef Santi conceptualized what he wanted and had the furniture made, including wood top tables, a bar counter, wooden banquettes against the walls, and a shelving 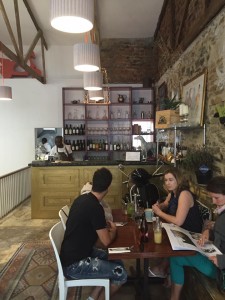 unit displaying their self-made preservatives, chutney, and tomato sauce. White plastic moulded chairs add colour. The space is tiny inside, and a scooter found a home inside too. They can seat about 25 patrons inside and the same number outside on the pavement, being part of what has made this part of Bree Street so trendy. The red front door adds a splash of colour. A rough brick wall adds character to the interior. Cacti adorn the window sills, feeling out of character with the wall of herbs, and look a little neglected. Lighting is good, tested on a grey winter day. They offer paper serviettes as well as imported German Fuchs cutlery, in a glass on each table.

The A4 paper menu is attached to a wooden board with an elastic, and Dominique allowed me to take a copy with me, and printed out their new dinner menu, which applies from this week onwards. Good news is that they serve Breakfast all day, including French Toast (R50), granola and yoghurt (R65), omelettes and bacon (R65), and a full breakfast (R75). The lunch offering is salads and sandwiches, costing between R70 and R90, depending on the filling. Free-range eggs are supplied by Usana.

Dominique told me that Chef Santi would send out an ‘assiette‘ of dishes. The first was a Spanish 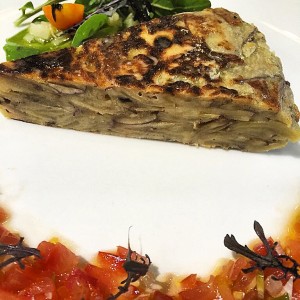 Sweet Potato Tortilla (R65), which was served with a salsa of tomato, onion, and spring onion, with a sweetish dressing, and livened up the look of the dish, the tortilla colour not being very exciting. I did give it an Instagram treatment. I felt the same about its taste, being bland. I did not finish it, in part because I did not know what was still to come, and because it was unexciting. Chef Santi was honest in his response to my feedback, saying that he wants to take 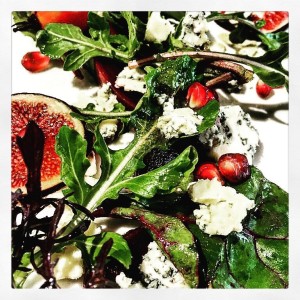 the dish off the menu, but that their patrons love it. On Saturday mornings they serve the tortilla and sell their preservatives at the Oranjezicht City Farm Market.

The salad of poached beetroot, pomegranate, fig, and Stilton was by far my favorite, for its well-paired fig and cheese combination, for being fresh and healthy, and being so colourful, which I enhanced via Instagram.

The Beetroot and Stilton salad as well as the Tortilla are offered as Starters for Dinner, with a spicy calamari salad (R65), and a cheese and charcuterie board, at R120. 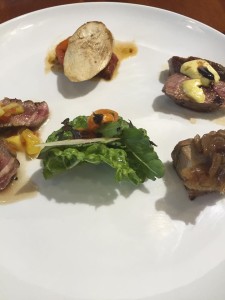 The third course was a taster of their meat dishes, which I struggled to photograph to do justice to the dish. I was surprised when the ribeye beef dish, which was extremely tender and had a crispy crust, was topped with pineapple, and also unmentioned chili, which I do not eat at all. The pan-fried chicken with herbs and tomato was perfect, as was the lamb with an unusual cumin butter, and the triple-cooked pork belly served with its own Little Saint chutney. The plate demonstrated Chef Santi’s saying that they serve meat ‘from mummy to plate‘. The full main course portions cost R130 for the pork belly and lamb, R110 for the chicken breast, and R150 for the ribeye steak. Yellowfin tuna can be ordered for R140, while a vegetable dish costs R95. Ryan Boon supplies the meats.

The dessert sounded good, as poached pear on a bed of honey and nut brittle, served with a rocky road biscuit, and a mint-infused yoghurt and cream dressing (R65). Just before I started to eat it, I was warned that the pear was infused with jalapeño, but that it would not be too strong. I felt that it overpowered the pear, and it was too strong for me to eat. I Instragamed the photograph, to give it more colour. I felt that the plating was a let-down, looking somewhat better with the filter-treatment. A dessert alternative is a cheeseboard at R120.

I enjoyed a very strong double-shot Kamili cappuccino, interestingly served in a very small cup, which led to a longish discussion about it with Chef Santi. Kamili has created a special blend for Little Saint. They supply Bacon on Bree too. Chef Santi feels that Cape Town comes second after New York in its coffee culture.

While I was there, sales representatives of Delaire Graff and Edgebaston did a tasting of their wines, for consideration for the winelist. The winelist is very limited currently, stocking Allée Bleue, Usana, Teddy Hall, Bouchard Finlayson, Dornier, Sterhuis, Taillard, Beaumont, Montpellier, Iona, and Van Loveren.  White wines by the glass start at R28, Rosé at R33, and the only red by the glass costs R45. Sloppy errors and wine cultivar abbreviations distract, and are a poor reflection of the restaurant.

Chef Santi worked in restaurants in France, Italy, and the UK in the past 30 years, but then moved into the property business until they moved to Cape Town last year. They had come to Cape Town on holidays before, and they motivated their move by wanting the ‘chilled life‘ of Capetonians, feeling that locals have a better balance of life. Dominique is a Pilates trainer and has a studio downstairs, where they have an art gallery too. Dominique said that they want to create a Design for Living business, which is designing restaurant interiors, as well as a Movement for Living for her Pilates business. Chef Santi too has ambitious plans to start a School of Excellence. Chef Santi is keen to do his bit for the local needy community, and supports Harvest of Hope, a charity project that supports farmers in the Phillipi area, supplying organic vegetables which are tasty and flavorful, even if not always pretty. Chef Santi was surprised at the quality of the local produce.

Chef Santi said that they may open for Sunday lunch in summer. I was impressed with the health orientation and the herb wall of Little Saint, but its heavy chili hand will make me very careful before ordering any dish in future.