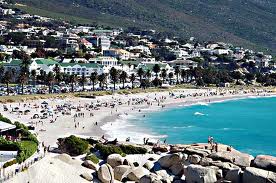 The past two days have seen the start of a 10 day period in which Cape Town accommodation is booked out, with resultant chaos on the roads, and is impacting on tourism services, to the frustration of the many visitors, largely South Africans, in Cape Town, as well as its residents!

The positive aspect for the holidaymakers is the magnificent weather we have been blessed with, the South-Easter having stayed away so far, although it may make a vigorous comeback tomorrow.  This has attracted locals as well as tourists to the beautiful beaches of Cape Town, Camps Bay and Clifton being the two most perfect and beautiful Blue Flag beaches in our city.  I have not seen such parking demand as yesterday, when the parking spaces opposite and in front of the Camps Bay High School were full by midday.

The downside is that Cape Town is unlikely to cope with the volume of cars and visitors in the next week:

*   for the first time City of Cape Town traffic services regulated traffic coming down from Signal Hill or up Kloof Road past The Roundhouse this past weekend, a crossing of many near-accidents.   This means that traffic coming up Camps Bay Drive from Camps Bay is badly backed up.

*   even worse was the situation at Table Mountain yesterday.  I had offered to drop two Norwegian guests at Platteklip Gorge, where they wanted to hike up the mountain.  Another set of traffic police helped me get onto Tafelberg Road, only to have a near collision with a bakkie belonging to the Table Mountain Aerial Cableway Company, stopping suddenly in our lane in front of the car, having travelled all the way down the mountain against oncoming traffic.  He shouted at us that we were not allowed up the mountain, as no traffic was moving up or down, yet the Cablecar sign at the circle showed that the Cableway was open.  We had seen cars parked all along Camps Bay Drive near the traffic circle,  and this explained the problem.  My guests had to get out of my car, and walk all the way from the traffic circle at Kloofnek Road, to the Platteklip Gorge pathway 500 meters past the Cableway ticket office, and walk down the mountain again, as the queue to get down the mountain by Cablecar was too long.  They reported back that there were no cars at the top of Tafelberg Road, and that it appeared that the lane was kept open for taxis and the Hop On Hop Off buses only.  One wonders how many cars were turned away at the traffic circle, causing even greater traffic problems!  Our guests were shocked at the Cableway cowboy’s rudeness and aggressive behaviour towards ourselves.  I Tweeted about the Cableway being closed and that no cars were allowed up Tafelberg Road.  The very ‘clever’ reply was: ‘Cableway is operating but the road is closed due to traffic volumes‘!   There was no apology for the rudeness of their staff member, ironic as the company’s CEO, Sabine Lehmann, is the Chairman of Cape Town Tourism, obviously feeling to be beyond reproach.

*   the traffic on Victoria Road through Camps Bay has been impossible in the last few days, a journey from Bakoven to the main centre of Camps Bay taking half an hour on Christmas Day, and a trip from Hout Bay to Camps Bay took an hour at 19h00 last night!  We have seen no control from the City of Cape Town’s traffic services in general, nor to deal with the annoying sedan and minibus taxi U-turns all along Victoria Road slowing down the traffic in both directions specifically, without any action taken against them. The traffic services at best drive through Camps Bay and do not stop in the suburb nor control the traffic. Taxis stopping and waiting for business at the MyCiTi Bus stops as well as the massive Hop On Hop Off buses block the traffic flow, without any intervention from the traffic police.  To top it, yesterday cyclists were riding to the left and the right of cars, the latter driving in the middle of the two lanes, which is contrary to the new cycling law.

*   we have read reports of Robben Island disasters yet again, one of its ferries having been taken out of operation since the beginning of the month for mechanical problems, a continuous problem.  Due to passenger injuries caused recently in rough seas, the company is not chartering boats from the Waterfront Boat Company, meaning that not all booked tickets can be honoured!

I have not been near the city centre nor the V&A Waterfront since Saturday, and can imagine that it is busy, and that it has similar traffic issues.

While we welcome the many tourists in our city, we feel sorry for them, crowding out the restaurants in Camps Bay and elsewhere.  One cannot but help wonder what service levels they will receive, given how poor the service is when it is far less busy! Compounding the service problems is the staff disasters we are hearing everywhere, with staff just walking out to other jobs without notice, or just not arriving at work for a number of days!  Even a retailer like Pick ‘n Pay, which is super busy, is short staffed, as it paid its staff bonuses just before Christmas, leading to a large degree of absenteeism, the dutiful staff having to carry the load of their absent colleagues.

The City of Cape Town should be taken to task for not controlling traffic in major traffic blockage areas such as Camps Bay.  Predictably Councillors are on holiday themselves, and don’t seem to care about what is happening to their city in their absence.  Even the City’s Tourism, Events, and Marketing Directorate has senior staff who are not at work, a practice we criticised when former Cape Town Tourism CEO Mariette du Toit-Helmbold and all her senior staff would take leave at the busiest time of the year, leaving the running of the operation to her secretary!

POSTSCRIPT 30/12: The Cape Argus today reports that two of the three Robben Island ferries are out of operation at the moment, due to mechanical problems!  Cape Town Tourism is advising tourists to not book tickets to visit the island this week, a PR disaster for the city and its tourism industry, given the importance of the destination after the recent passing of the late Nelson Mandela!