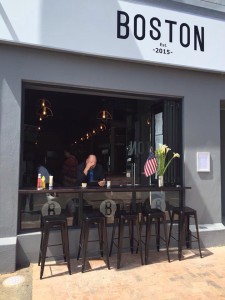 While it may sound ironic that an American Diner has opened in Heritage Square, a building dating back to the 1770s, the new Boston seems to fit right in on Buitengracht Street and in Cape Town.

I had parked nearby when I visited the bottling of the wine made from the oldest vines in the Southern Hemisphere at Dorrance Cellar inside the Heritage Square courtyard earlier today. It has a window counter to the pavement, at which one can sit on the inside and outside on grey/silver or black chairs, neatly arranged inside at black topped tables. A vase in the entrance has arum lilies in them and the American flag. The walls have American-related pictures, 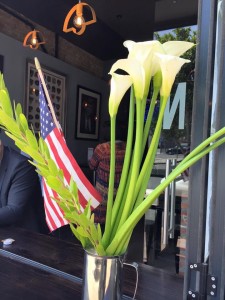 including one of a very squint JF Kennedy.

Owner Eric Coakelin welcomed me, wearing a baseball cap, no doubt of the local baseball team, and said that he had lived in Boston for 10 years, before returning to home. He grew up in Johannesburg, I heard from a conversation he had with another customer, and was involved 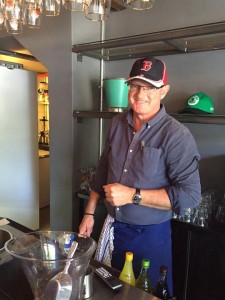 in creating restaurant interiors there, the professionalism showing in his Boston interior. He opened a week ago, and it feels as if it has been open for much longer. He told me that he has never run or owned a restaurant before, but seems a natural, coming to check on things regularly.

I ordered a cappuccino, and then glanced at the menu, which is completely USA! Breakfasts range from R27 for health breakfast, bacon on a bun costs R33, scrambled eggs and bacon R33, smoked salmon with cream cheese R78, and salmon with scrambled egg costs R79. A list of extras can be added to each dish, at a specified charge.

I liked the sound of the burgers, not being a Burger person normally, 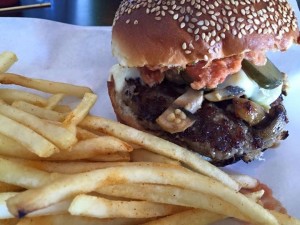 and settled on the Wahlburger in honour of actor Mark Wahlberg, consisting of a 100% beef patty, mayonnaise, mushrooms, Swiss cheese, and pickles, served on a very tasty brioche bun, with crispy American fries (R79). The burger was served with 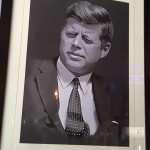 Heinz ketchup. Other burgers are designed in honour of other well-known Americans, such as JF Kennedy, Uma Thurman, Jacky Onassis, Matt Damon, and Boston ‘best ever sportsman’ Larry Bird, costing between R69 and R79. I was impressed with how Eric juggled running the Diner and making the burger himself.

One can also order wings and ribs, sides, salads (R57), real American desserts such as cherry pie, apple pie, and cheesecake, each with ice cream (R45), a soda float, and milkshakes (including an Irish 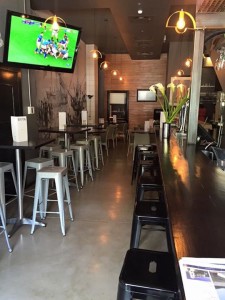 I was impressed with the neatness, friendliness, and good value at Boston, and will return.