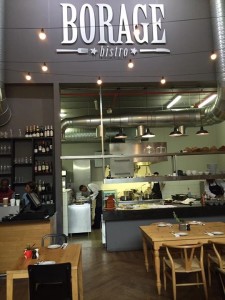 Surprise news this week was the announcement on Facebook that Borage Bistro would be hosting its last Supper Club this week. The restaurant moves out of its current premises tomorrow, after two years in the Portside building at the bottom of Bree Street, and goes into a ‘winter hibernation‘.

I visited Borage Bistro and Chef Frank Marx on Friday morning, and he shared that a number of factors have led to their decision to move out. First and foremost is the expensive rental. The location of their outlet facing Hans Strydom Avenue has never been ideal, and parking has been a problem in the daytime in particular. The toilets are in the Portside building, none of the outlets on the ground floor having their own, creating an inconvenience for customers of the building.  Promises made by the managing agents as to the number of persons working in the building, predicted as 7500, have not materialized, Chef Frank saying that there are not more than 1000 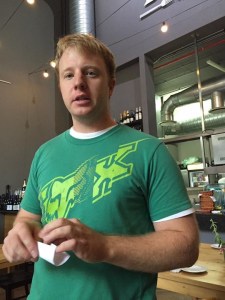 workers in the building.  It appears that the managing agents have not delivered on their initial promises, and it is apparent that this has led to the loss of other ground floor businesses too, only three tenants remaining after Borage Bistro moves out. Chef Frank was on his way to do some shopping for his lunch trade, and hence he was in his civvies.

Today Borage Bistro will cater for the Cape Town 12 One Run, and from Monday they will start packing up, having to remove all their belongings, including the R300000 extraction and all kitchen equipment, by the end of the month. All their staff have been told about the development, and some have already been placed at Chef Luke Dale-Roberts’ Shortmarket Club opening next month. Chef Luke was Chef Frank’s mentor, working together at The Test Kitchen, and thereafter at Pot Luck Club, whereafter Chef Frank went to the UK, working for Chef Heston Blumenthal.

Chef Frank has a cult following, despite his shy nature, and he will no doubt announce his future plans once he is in a position to do so after this hibernation!