Last week I attended a presentation by Professor Tim Noakes on ‘The Science behind Banting Diets’, which was organised by PR-Net and held on the top floor of the Naspers building.   I went as a sceptic, but it appeared that almost all attendees were already committed Banters.

I have not followed the initial controversy about Professor Tim Noakes, co-founder of the Sport Science Institute, who published ‘The Real Meal Revolution‘ in which he advocates a ‘LCHF‘ (Low ‘Carb‘ High Fat) balanced diet eating focus to help one lose weight.  While ‘LCHF’ was not a very catchy a name for the diet, the ‘Banting‘ word spread like wildfire, being the name of a diet tried with success by William Banting more than 200 years ago. Professor Noakes was not believed initially, given that he had advocated a low fat, high carbohydrate eating plan in the past, and now was turned his thinking around 360°!  The medical fraternity is not sure whether to support his recommendations. 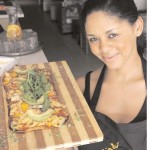 I originally laughed Banting off, but it was the experience of Whitney Wentzel, the owner of 65 on Main in Green Point, that demonstrated how powerful the Banting craze has become.  She shared that her customers, who used to enjoy her wraps, requested that she offer Banting-friendly dishes for them to eat, as wheat-based foods were not allowed on the eating plan.  They bought Professor Noakes’ book for her, and she made an increasing number of dishes from it, adding them to her menu, to such an extent that she only offers a Banting menu now, it being so popular that her patrons travel from as far away as Worcester to Bant at her restaurant. She has changed the restaurant name to 65 on Main Lifestyle Food and Banting Café, and has received extensive coverage on etv, in the Cape Times, Destiny, and the Cape Argus. When she celebrated the first anniversary of her restaurant at the beginning of this month, her guests brought her cauliflower as presents, being the vegetable that has become synonymous with Banting, replacing carbohydrates for use in mash, risotto, wraps,  pizza bases, and more.  Now Whitney is trying to create dishes that non-Banters eat, but that are based on Banting principles.  She is creating a Banting High Tea, for example.  She changes her menu weekly, and incorporates her clients’ favourite recipes too. She serves carb-free bread.  The ingredients needed to prepare Banting dishes are expensive, one requiring gluten-free flour, ghee, macadamia and coconut oil, cauliflower (which has doubled in price due to the high demand), Xylitol (a sugar substitute) , bacon, eggs, flaxseed powder, cream for coffee, Himalayan salt, and more.

Noakes looks healthy at 65, trim and slim, and he shared that the Banting diet allows him to run the same distance as he did in the past at age 41 on Tafelberg Road in a shorter period of time.   He advised that our diets should go back to those of our forbears, when they ate livers, kidneys, and brains for breakfast (his ancestors are from the UK), even eating high fat hippo 200 years ago.  The world has a shortage of large high fat animals, and that has made one eat more starch, leading to obesity, and causing diabetes.   He shared how his diet makes one lose weight without being hungry, and how much better it makes one feel. He shared that he only had one overweight fellow-class mate at school in the late ‘Sixties.  Now the average Grade 12 learner at school is 10 kg heavier than then.  He summarised that processed foods are verboten as are grains, wheat in particular being hard to digest.  Sugar is equally dangerous, being ‘like a drug’, he said.  We laughed when he said that a ‘beer boep‘ is in fact an insulin roll, a Diabetes indicator.

The surprisingly small venue had been set up with tables, at which Banting product suppliers displayed their produce and literature, to allow the mainly PR executive audience to sample their products and to obtain more information about the fat and carbohydrate (if any) content of their products.  Brands 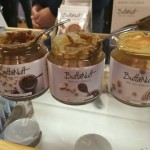 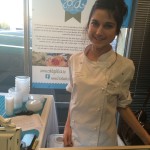 Noakes spent a lot of time talking about Diabetes, saying that it is a genetic disease, which can never be cured, but that it can be reversed, allowing one to eventually stop taking diabetic medication.  He said that diabetes has grown since 1977, as consumers have eaten more processed foods, and increasing quantities of sugar.  He said that 80 million of the world’s population is pre-Diabetic.

Professor Noakes rubbished ‘veganism‘, saying that ‘it is a disaster‘ although very ethical, and that one needs to eat fish, eggs, and meat. Such vegans tend to compensate with high carbohydrate usage.  The highest proportion of carbohydrates is eaten by low income groups, and they are becoming obese, and developing diabetes.  He praised innards as having the most nutrients, and are therefore very healthy to eat.  Surprising was that Professor Noakes slated Woolworths, saying that he is ‘bored‘ in their stores, and described them as ‘dreadful‘!  He referred specifically to the retail chain making seasonal foods available every day of the whole year, instead of when the foods are ripe naturally.

We left the talk with one message: men are better at losing weight on Banting than are women, and Professor Noakes put it down to mental programming, men being more functional about eating, and better able to ‘reprogram‘ their brain as to when and what to eat.  Women are more emotional about eating, he said.  He provided tips for eating out at restaurants whilst Banting, avoiding bread and dessert, and checking which oils the chefs use to prepare the foods.  He suggested that one should order the fattiest meat on the menu, being lamb.  Beer and wines obviously are taboo too!

Yesterday Professor Noakes featured on the front page of the Cape Argus, addressing representatives of Parliament about the ‘ticking time bomb of obesity and diabetes’. He presented a copy of his book to the Deputy Speaker Lechesa Tsenoli, and also addressed the Parliament Canteen chef, encouraging them to avoid processed foods, and to follow his ‘LCHF’ approach. In the same issue, the newspaper did a feature on Banting, writing that ‘Cape Town has gone Banting mad’, featuring Whitney and her 65 on Main Lifestyle Food and Banting Café; Kauai which offers cauli-rice with its meals; Butler’s new Banting pizza to be launched soon; and excerpts of Professor Noakes’ talk at the PR-Net function.  In the article Professor Noakes is quoted as saying that in ten years from now, ‘the world will remember it started in Cape Town’! 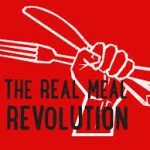