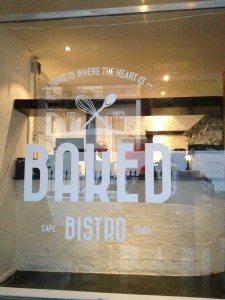 Driving to Hout Bay yesterday, I noticed that a new restaurant Baked Bistro had opened in Bakoven, where Saboroso and Marika’s used to be. It opened six days ago, and is owned by passionate Zahir Mohamed, a young 24 year old who has big plans for his business.

I spent two interesting sessions with Zahir yesterday, returning to eat after having had an iced coffee earlier in the afternoon.  Zahir’s presence made a huge difference to my impressions of his Bistro, and the more he told me about his background, the more I realised that this young man will go far.  I could not but help think that I was talking to a junior Ravi Naidoo, who has vision and drive to make his new business a success. Zahir grew up in Port Elizabeth with his grandparents, and his grandmother was his cooking inspiration, cooking typical Malay dishes, including prawn, fish (geelbek, hake, and steenbras), and lamb curries, as well as pies, and baked treats such as apple crumble, malva pudding, biscuits, and more.  His grandmother instilled a love of food in him, and allowed him to cook at home.  His Scottish father owns African Time Catering in the UK, which looks after the catering needs of Manchester United and Manchester City players and its VIP guests, as well as at Wimbledon, and at St Andrews in Scotland.  He emphasised that while his father focuses on fine-dining, he prefers ‘rustic’ meals.   He has worked for his father, doing basics such as peeling potatoes, which stood him in good stead in a next phase of his life. He 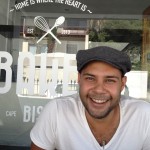 followed this with a year at the Meliá Hotels International, working for a year each at a Melia hotel in Italy and in France.

Zahir had a business in Johannesburg, and his young son lives there.  He mentioned a number of times that his sole purpose of being and working is to give his boy the very best he can afford. Needing a change of scenery after a bad business deal fell through in Johannesburg, he moved to Cape Town, where he met Misha, ‘the love of my life’.  He worked at Brandhouse, and on the Heineken brand specifically, until he gave up his job to follow another dream, which will see him featured on TV later this year.  But Baked Bistro has been an idea cooking away over the past four years, and the Bakoven venue specifically, having visited the site on numerous occasions to feel it and fall in love with it, waiting his turn for the space patiently.  When the last restaurant closed down, he knew it was time to take it over.  He is a very believing and philosophical person, saying that ‘the universe will give me what I need‘.   He plans to open other Baked Bistros in Cape Town as well as in Johannesburg, and a Baked cookbook is also on the cards, which will feature recipes for hearty rustic foods to prepare in one’s home, and that are simple and affordable. Damian Cannon is doing the website design, and designed the logo, which contains a spoon and whisk, with the payoff line ‘Home is where the heart is’.

Baked Bistro does not yet have a liquor licence, and is playing it safe in not breaking any laws, and will only serve alcohol once all the paperwork has been approved.  He keeps the music volume low, and ensures that there aren’t any noisy customers, to keep on the right side of his neighbours.  Zahir wants Baked Bistro to become a ‘neighbourhood shop‘.   Cookbook writer Phillippa Cheifitz lives across the road, and has been to Baked Bistro three times in the past five days, Zahir shared proudly. The furniture is black stained wooden tables and benches, matching the rustic menu.  Cutlery is by Austwind, serviettes are paper, and salt and pepper grinders are by Natural.  Little lanterns are brought to the table when it gets dark.

The menu is very short and sweet at the moment, and will grow as more customers support the Bistro. The choice was between two pizzas (‘The BAKOVEN’ with chicken, caramelized balsamic onions, feta, avocado and mozzarella, costing R75; and a ‘5 Veg Pizza’, costing R65).  On Zahir’s recommendation I tried The Misha burger, 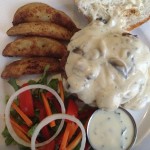 named after his girlfriend, who loves mushrooms, and the 180 gram burger is served with a mushroom sauce, potato wedges, and a small carrot, lettuce and red pepper salad, and an interesting mint yoghurt dressing. I don’t usually eat burgers, and I found the mushroom sauce too strongly spiced, with an unexpected touch of chilli, which I did not like.  The sesame seed roll is self baked.  Misha works at Levi, and a second burger is named ‘The LEVI’, a 180 gram burger with red onion compote.  Both burgers cost R70. ‘Artisan sandwiches’ cost R40 – R55.   The winter menu will contain ‘wholesome winter dishes’.  Valentine’s cupcakes looked beautiful, and are made for Baked Bistro by Take the Cake, one of them made with black velvet, and another contained a Lindt ball.  My estimation of Baked Bistro rose when I noticed that they serve Terbodore coffee, who have made a special Baked blend for the bistro, consisting of 60% Nigerian, 30% Ethiopian, and 10% Brazilian beans.  The breakfast menu will contain interesting dishes such as scrambled eggs and sardines.

New guests are invited to ‘get baked’, and departing ones are sent away with a ‘stay baked’ greeting. Zahir wants Baked Bistro to be a homely, unpretentious home to the locals, without any airs and graces, a place where one can come to play Scrabble, and hold book club meetings.  I will return in a few weeks, to get another feel for the food, and additions to the menu. 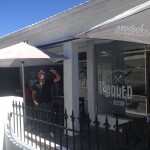 POSTSCRIPT 9/3: Baked Bistro is proving its sceptics wrong, coining it with a new roadside coffee and croissant service offered on weekday mornings, bringing ready made coffee and croissants on to the parking area outside the restaurant, and offering a drive-by service, selling to hundreds of customers!  The new Terbodore umbrellas are attracting attention in Bakoven.

POSTSCRIPT 9/6: Something we have not been able to write about until 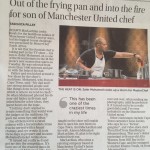 today is that Baked Bistro owner Zahir Mohamed is a MasterChef SA Season 2 contestant.  He features in the Sunday Times today, and will be in the opening 15 minutes of the first program on Tuesday 11 June at 19h30, filmed during the Auditions.

POSTSCRIPT 21/6: Zahir Mohamed fell out of the MasterChef SA Season 2 Bootcamp Top 50, let down by his potato peeling skills!  He has received incredible airtime from M-Net, so much so that we thought he had won!  He is very philosophical abo 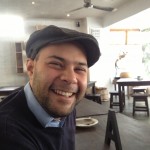 ut his journey, as he knew he had Baked Bistro waiting for him, for which the lease commenced on 1 February, which meant that he would have had to pay rent while he was at Nederburg, had he made it into the Top 16. He has received further coverage after falling out of the show, in The Times earlier this week, having found a ‘different recipe for success’, the headline says.  The article states that he plans two more Baked Bistros in Cape Town, and that a book ‘The Baked Way of Life’ is on the cards.  He is on a high, receiving a lot of customer and media interest.