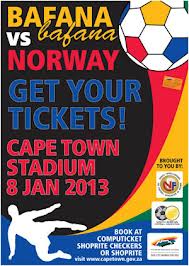 Last night visiting soccer team Norway beat our national team Bafana Bafana 1-0, played in an International at Cape Town Stadium.  Billed as a consolation prize for the fact that Cape Town did not make the AFCON 2013 host city bid, the event last night made no contribution to attracting tourists to Cape Town at all!  The match was seen as a warm-up match for Bafana Bafana’s participation in AFCON 2013, which starts in ten days.

One wonders how the City of Cape Town can allocate millions of Rands of ratepayers’ monies to its newly created Tourism, Events, and Marketing Directorate, led by its Executive Director Anton Groenewald and reporting to Mayoral Committee member Grant Pascoe, when they are so poor at handling any marketing of Cape Town and the organisation of events in the Mother City!  The department is under pressure to earn revenue from its biggest (loss-making) asset, being the Cape Town Stadium.  It was odd then that yesterday one could read on Facebook and Twitter about the frustrations last minute ticket purchasers experienced at Computicket, only single seats being available yesterday morning, even though the full allocation of 40000 seats for the match had not yet been sold.  A new release of tickets was promised by the City, but did not appear to have been made.  On Monday morning the City was using the local radio stations to market the event, it being claimed that only 8000 tickets had been sold.  One also read on Twitter that tickets could only be bought at Computicket, and were not available at the stadium itself, which appears to be a marketing weakness too!  Last week the City placed print ads such as the one in this blogpost in the local newspapers, to encourage ticket sales, clearly a home-made design job!

The City’s media statement quoted Groenewald as saying that ‘the match is a sign of its commitment and and continuous support for Bafana Bafana‘, despite the soccer team only having played in Cape Town for the second time in three years!

Even though the City has seen it in the past, when Manchester United played Ajax Cape Town last winter, soccer matches do not attract out of town visitors to Cape Town. The same was the case yesterday, for two reasons. The soccer matches are supported by local Capetonians, and the support clearly is not attractive enough yet for Western Cape residents to drive from other cities and towns to see the match, especially as the starting time of 20h30 was so late.  Even more so this starting time would have necessitated accommodation for out-of-town soccer fans, but we did not see any enquiries or bookings for the soccer match.  In addition, Cape Town is still bursting at its tourism seams, and so if there had been a tourism requirement, there would not have been any space for them to be accommodated in a suburb such as Camps Bay!   One wonders why the City chose a date for the match at a time when Cape Town did not need any additional visitors!

Had the Cape Town Stadium been full tonight, with all 40000 seats sold at an average price of R75 (ticket prices were R100 and R50), the total revenue would only have been R3 million, which

would not have covered the costs.  We know that the City buses in soccer fans for free in the last minute to save face, that Computicket would have charged the City of Cape Town a fee per ticket sold, that not all tickets will have been sold, and that more cheaper tickets will have been sold, meaning that the real income may have been closer to R1,5 million income, hardly worth the effort in terms of costs relative to income.  The match also damaged the image of the City of Cape Town, in reflecting its inability to organise and market events!

It was the City of Cape Town and its Councillor Grant Pascoe that have cost Cape Town, and with it its tourism industry as well as soccer lovers, a vast income which Cape Town would have earned had it been selected as a Host City for AFCON 2013, which kicks off on 19 January, and runs over three weeks. South Africa was awarded the African soccer games when FIFA cancelled Libya as the host country due to political turmoil.  The City of Cape Town owes the tourism and hospitality industry lost income!

POSTSCRIPT 9/1: The following comment about the ticket sales by the City of Cape Town was posted to this blogpost today: “I’m afraid it gets worse. The inside track has it that due to slow ticket sales days before, they utilised their own infrastructure to sell tickets, with the MyCiti kiosks etc. And of course, when they were deluged with last-minute sales, they had to re-load all those tickets on computicket, at a 1000 tickets per time. Which was a huge disadvantage to all those queue-ing as those tickets were snapped up online within minutes of their being loaded onto the system. Hence the estimate of 10 000 turned away at Computicket due to tickets being “sold out” Groenewald sheepishly claimed they didn’t take into consideration that Capetonians buy tickets at the last minute! Oy va voi!”