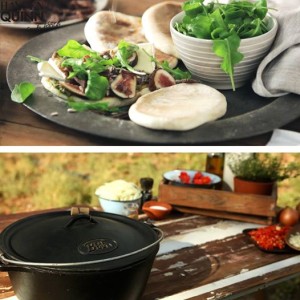 Hayden Quinn covered a large distance in last night’s episode, travelling from Oudtshoorn to Prieska via Prince Albert, and ending off in Hertzogville in the Free State. Farmer Hennie de Bod tried to teach Hayden some Afrikaans sayings, which Hayden wasn’t too bad at repeating.

The 500 km trip in a lovely red new Mercedes-Benz GLA began outside Oudtshoorn, at the Gamkaberg Reserve, where Dr Quinton Martins, the founder and Director of the Cape Leopard Trust, showed Hayden the research camera capturing the movement of leopards, as well as of other wildlife, demonstrating the Biodiversity in the area.  Hayden was made to do a leopard crawl, to get a feel of a leopard’s movement.  Dr Martins has more than 1000 photographs of leopards, 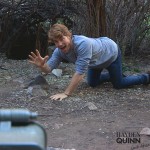 and his research shows that there is an average of one leopard per 100 km².  Then it was onto the gravel road of the Swartberg Pass, which separates the Little and Great Karoo and was built in 1888 by Thomas Bain, which took Hayden to Prince Albert.  Here he only spent the night at the only hotel in town, the Swartberg Hotel and its Victoria Room Restaurant ‘from a bygone era’, Hayden said.  Hayden did not see anything else in the village, which has become famous in serving as the location for Kokkedoor Seasons 1 and 2. 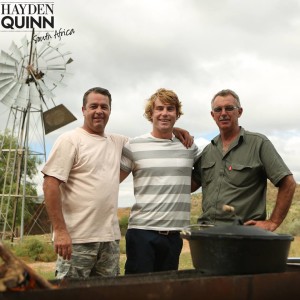 From Prince Albert it was a six hour drive to Hennie de Bod’s (spelt as ‘de Dod‘ on the ‘Hayden Quinn South Africa‘ Facebook page, their handling of Dr ‘Martins’s’ on their website also incorrect!) farm outside Prieska, where he farms with Damara sheep, being one of Woolworths’ free-range lamb suppliers.  Hennie was a very friendly man, oozing South African hospitality, but he struggled with his English.  He taught Hayden two Afrikaans phrases: ‘n boer maak ‘n plan’, by adding a cork on a chain attached to the lid of his potjie, to lift the potjie lid without burning his fingers; and  ‘die son trek water‘, which means that it is getting late.   Hennie showed Hayden how to make a lamb potjie,  starting with onions, his secret masala spice mix, onions, garlic, and lamb neck and shin.  Hennie taught Hayden to listen to the pot, saying that ‘the pot must talk to you’, otherwise it is dead, he said. For the first time we saw that Hayden is left-handed in stirring the onions.   Hennie made Hayden do quite a bit of the cooking work, shooting instructions at him.

Then Hayden got onto the back of Hennie’s bakkie with farm manager Stefanus Vermeulen, and he commented how like the Australian Outback it is, being dry, arid, and full of sheep!  The Damara sheep do well in the harsh and hot (43 – 45°C) conditions, only coming into the kraal once a year, the 400 – 1000 hectares being their ‘kraal’. 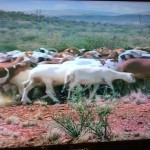 Hayden was promised a cooling swim with ‘girls’, and it turned out to be in the farm dam, and the dogs joining them in it.  When they returned to the potjie, Oom Piet Raats was playing the accordian.  Hennie 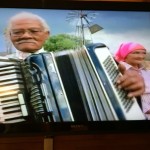 gave Hayden a hug, for bringing the good luck of rain, a thunderstorm being heard and seen in the background, later becoming a heavy rainstorm with hail.  Before the rain could spoil their lunch, Hennie added potato halves and sweet potatoes, more secret spices, and water, to finish off the potjie.  He cautioned Hayden about not stirring the ingredients too much, so as to ‘not injure anything’ in the pot!  A glass of red wine was enjoyed with the potjie feast.

Hayden then drove to a sunflower farm in Hertzogville in the Free State, the sunflower having been a symbol for the TV series. Oddly here Hayden prepared a ‘no-bake fresh pizza‘ in the middle of a sunflower field, preparing the pizza base in a black pot, and then adding basil pesto, Brie, blood red figs, biltong, sunflower seeds, rocket, and drizzling it with lemon 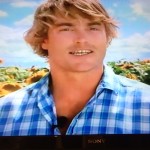 juice. From here Hayden will travel to Johannesburg next Monday.

The question remains: who is Hayden Quinn, and why was he selected by the production company on behalf of Woolworths to show us the beauty of our country, and its bounty of sustainable foods and wines?  Hayden Quinn is an Australian surfer and former professional lifeguard, ‘WWF-SASSI ambassador’, a ‘cooker’ and by his own admission not a chef, and a 2011 MasterChef Australia top 3 Finalist.   Episode 1 of ‘Hayden Quinn: South Africa’ focused on Cape Town, and made Capetonians proud of their city!   Episode 2 was very disappointing and boring, focusing on Stellenbosch!  Episode 3 was beautifully filmed in Paternoster, and was back on track.  Episode 4 was filmed in Franschhoek, which creatively included Fairview into the village!  Episode 5 was filmed in Elgin, Hermanus, and Stanford.  Episode 6 was filmed in Knysna.  Episode 7 was based in Oudtshoorn.