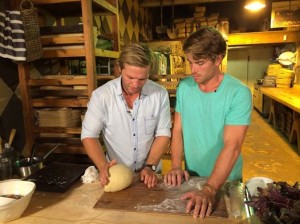 Poor Hayden Quinn!  Trying to be clever, the promo for last night’s episode 2, which was flighted on SABC3 on Sunday evening, had Hayden proudly sharing that he was going behind the ‘Boerewors Curtain‘ in Stellenbosch, to meet artisanal baker Fritz Schoon of Schoon de Companje.  The Tweet left Hayden with dough on his face, in making what he called a ‘joke‘, in poor cultural taste!

In reaction to a Tweet about his incorrect information (the ‘Boerewors Curtain‘ is a less than complimentary name for the residents of the suburbs of Parow/Bellville/Durbanville, to describe their love for braai-ing, in preference to most other activities, which means that they rarely leave their area, and that the area smells of braais from Friday evenings to Sunday lunch times on weekends),  Hayden replied: ‘I guess the little joke was lost haha just referencing stellies (sic) as a (sic) Africaans (sic) town‘.  His producer Riaan Badenhorst quickly jumped to his defence, explaining that Boerewors is ‘proudly heritage food‘, which was not the point of the Twitter exchange!

‘Hayden Quinn : South Africa‘ was first flighted on SABC3 last Monday,  doing a great job in making Capetonians proud of their beautiful city and its fresh produce bounty.  Hayden was a MasterChef Australia finalist in 2011, but did not win the series, and has managed to sign up the series about our country’s sustainable food production.  The programme is sponsored by Woolworths and Nedbank in the main.  Last night’s episode was boring by contrast, due to the heavy advertorial content on behalf of Woolworths.

Hayden started his journey in Paarl, visiting the Taalmonument, which he pronounced well. He described it as one of the largest 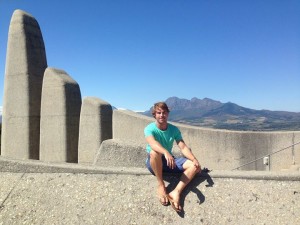 monuments in South Africa, ‘welcoming you to the Cape Winelands‘ he tells viewers – one wonders who wrote his script!  The monument was erected in recognition of the African, European, and Asian origin of the Afrikaans language, a word he is able to pronounce better than he can spell!   The highest spiral of the monument is 57 meters tall, he tells us, and is open at the top to reflect the continued growth of the language.  The relevance of his visit to the monument to the programme is not explained.

Hayden then meets up with Fritz Schoon of Schoon de Companje, who explains how they moved into the bank building, from the original next door bakery on Church Street, as they had run out of space, and because it is a family business – his wife Chanel makes artisanal ice cream, and his sister has a butchery inside the outlet too, together with Fritz’s breads.  Hayden harps on about Fritz being Afrikaans, but he is actually of Dutch descent, as the name of his outlet reflects!  They make mosbolletjies together, an ‘Afrikaans style food‘, only baked at a certain time of the year, when must is available, Fritz using must from old vine Chenin Blanc from Montagu instead of yeast.  Once the mosbolletjies have been baked, they are eaten with butter and jam, and Fritz teaches Hayden the ‘lekker‘ word.  The weirdest part of the programme was the visit by Hayden and Fritz to De Morgenzon, where they go ‘zorbing’, rolling around the lawn inside large see-through plastic ‘balloons’, without any explanation of the purpose of this insert, being of no benefit to the award-winning wine estate, which is well known for its unique practice of playing classical music to its vines, but this was not mentioned.

A visit to a farm in Stellenbosch on which Woolworths has its tomatoes grown becomes boring, in focusing on the sustainability of the project, explaining how water is recycled and how bugs are caught on yellow sticky insect traps.  The project is described as ‘holistic farming pioneered by Woolworths‘,  heavily pushing the sponsoring retailer in the episode.  Hayden visits another nursery, a grassroots project, which started business with 1000 plants and now grows 600000 indigenous plants such as spekboom, grown in biodegradable pots which can be planted as is with pot and all.  I could not identify the names of either of the two farms. 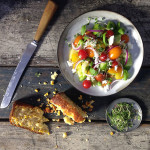 The programme finishes off with a salad made with the Woolworths tomatoes, some onions, peppers, feta, and the spekboom,  not particularly inspiring at all, the second salad Hayden has made in the two episodes, and eaten with a potbrood which Fritz had baked.

As if the advertorial push of Woolworths wasn’t bad enough, the rest of the episode was dominated by advertising, the sponsors’ TV commercials featured first (Centrum, SafariNow, Mercedes Benz GLA, Woolworths, and Nedbank), followed by those for Hippo, Shell, OLX,  Pick ‘n Pay (describing itself as ‘South Africa’s coolest supermarket‘!), Valpré, and ABSA Payment Pebble.  Lanzerac sponsored the accommodation, so the hotel received a punt too, described as a national monument in an ‘Afrikaans town‘!

It would be a pity if the future episodes are as heavily sponsor-driven and unexciting as that of last night.  The first episode featuring Cape Town had energy and was so promising, and one hopes that the producers go back to production ‘grassroots’ in the future episodes!

POSTSCRIPT 22/7:  The ‘Hayden Quinn: South Africa’ website has written a blogpost about last night’s episode, back-pedalling and tries to brag about the Afrikaans Hayden learnt while he was here!  Suddenly he is able to spell ‘Afrikaans’!  A member of his HQSA crew, Jessy Scheepers, has valiantly but unsuccessfully defended his poor show in last night’s episode in a comment to this blogpost!