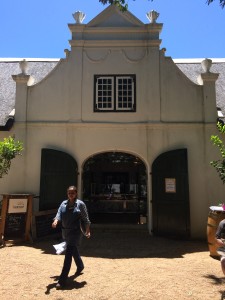 Boschendal has been below the radar for the past year, the only news having been that the estate was closed while it transformed itself into a wedding function venue.  It appears that the wine estate is not only catering for weddings, but has a number of exciting restaurant developments up its sleeve too, some completed and some more to come.  Having new Chef Christiaan Campbell on board, formerly of Delaire Graff, the estate is transforming itself into Boschendal Farm, with a focus on ethical and sustainable sourcing of ingredients and preparation of food. 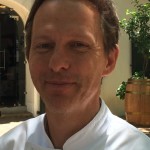 I visited Boschendal Farm yesterday, and was astounded at the energy, and part transformation which has already taken place.  Gone are the ‘cobwebs’ and the old fuddy-duddy feel which one experienced in the Buffet restaurant and the Café.  It started with me parking my car and Events and Functions Manager Aldo du Plessis (previously with La Motte and Grande Provence) driving past,  stopping immediately, and inviting me on a guided tour, an offer which I could not refuse!

We drove to the new wedding and conference venue The Olive Press, which is in a section of the more than 2000 ha farm which one has not seen 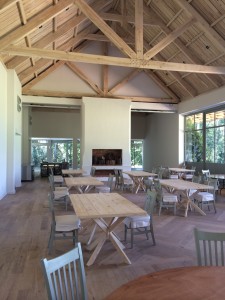 before, but which is close to the existing manor house and restaurant buildings.  It overlooks an auditorium, and a grass-planted area with newly-planted olive trees, Jan Blok being the landscape architect.  A stream has been created, and bridges will be built over it.  The venue can seat 350 persons, and the table choice will be traditional round or rectangular tables, the bride making the choice.  The building is not yet ready for weddings, even though some functions have been held inside it, the planning being that it be operational from the end of January.  It has a massive kitchen, to cater for the food preparation for the venue, and the food for the Le Pique-Nique is also prepared in this kitchen.   From the building one can see some of the cottages which have been developed to form part of the Boschendal Farm offering, accommodating 80 persons in total on the estate, and the seven closest to the wedding and conference venue will form part of the package.  Aldo said that they have received good bookings for 2015 already, and every weekend of December next year is booked already.  Fiona Hart has done the decor development, Aldo shared.  Chef Christiaan added that the venue will have an ‘earth farm feel‘, and they commissioned ceramicist Mervyn Gers to create crockery to reflect this.  For functions with more than 150 persons, they will offer family-style dining, each table receiving dishes from which the guests dish up themselves.  The New Year’s Eve dinner with the band Manouche will be held in The Olive Press.  Green environmentally-friendly building principles have been introduced.

We returned to the manor house side of the estate, and Aldo showed me the gift shop, spread over two rooms, and 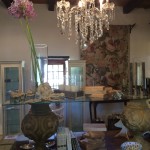 previously the not-very-nice Café.  It now stocks attractive home decor items, and clothing.  The rooms flow into a small tasting room, at which one can taste wines, in addition to the tasting 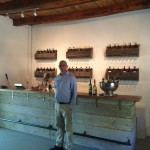 room at the opposite end of the estate.  Next door is the bakery, where hundreds of loaves of bread for use in the new Farm Shop and Deli (in the space which was previously the gift shop) are baked daily for food preparation and are for sale.  Next door to the bakery is the pastry section, where the cakes and other confectionery items are baked, available for sale and on the Farm Stall & Deli menu too.  Aldo also showed me the beginnings of a vegetable garden in pots, a water feature which will be a supervised play area for children, and a reverse flow hot smoker, which looks like a small locomotive, in which chickens for the Le Pique-Nique are prepared.  They serve up to 180 picnics per 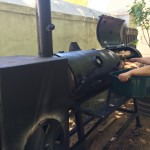 weekend day, and Chef Christiaan has revamped the menu for it.  The picnic basket includes salmon trout rillettes, chicken liver parfait, bread, roast chicken with coleslaw, baby potatoes, a salad, summer berries with a vanilla cream and sponge, cheeses, and chocolate marshmallows, at R175 per person.  One can choose to sit and enjoy one’s picnic at a table, or on  a blanket on the lawn.  Moonlight picnics are to be re-introduced, as early as next month.

We then looked at the restaurant building which formerly offered the Buffet, and it is undergoing a transformation too.  It has a section built on, facing away from the central walkway, overlooking greenery and the Drakenstein mountains, and wild buck are to be introduced here.  A number of openings to the terrace will let much more light into the main restaurant building, which has always been light-deficient.  Chef Christiaan showed me the drawings done by the international design consultancy Lazaro Rosa Violan from Barcelona.  He plans to bring part of the food preparation into the restaurant, starting in the entrance reception area, even adding a chef’s table here.  His team of chefs will be actively and interactively involved in serving the 250 guests on the restaurant floor.  Chef Christiaan proudly shared that they had found a master craftsman in neighbouring Pniel, who is crafting the tables, chairs, and bar counter, giving back to their community, from which they draw a number of their staff. The furniture is to be an eclectic mix of tables and chairs, eight different designs to be mixed and matched.  He will have an underground kitchen, which will be the central kitchen for the whole estate, as well as one at the restaurant level.  Chef Christian plans a place mat that describes the ethical sourcing of their produce. 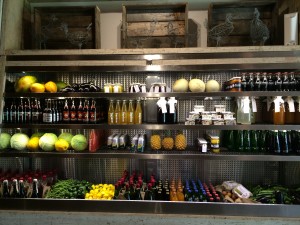 After this introduction, I visited the Farm Shop & Deli.  The Deli section is very spacious, and has seating inside for patrons wishing to be protected against the weather. The manager is Alandi Greeff, previously managing the Farm Shop at La Motte.  They sell cold drinks, cider, craft beer, a selection of fruit including pineapples, melons, apples, lemons, paw paw, as well as baby aubergines, zucchini, pattypans, beans, butternut, cabbage, all helping to create colour and 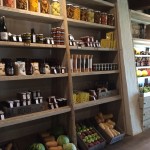 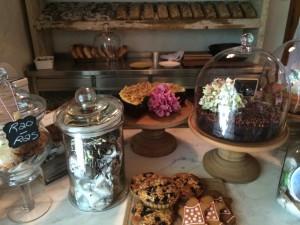 Deli, one sees the collection of breads that are for sale, as well as the cake and confectionery selection, which included a cheesecake, carrot cake, a flourless chocolate cake, and an upside down cake (cakes all at R35 – R45 a slice), scones (two for R40 with cream and jam), chocolate brownies, biscuits, macarons, and blueberry and almond tarts.  Two display cabinets contain charcuterie and cheeses, for their platters, as well as the ingredients which make up a choice of three salads on the menu.

The menu is a simple paper one currently, offering all-day breakfasts (R75 for a farm breakfast; R65 for a Dwars Rivier breakfast consisting of salmon trout, scrambled farm eggs, topped with crème fraîche; and an Angus beef breakfast at 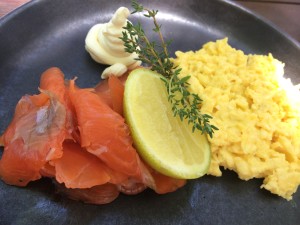 I did not initially see the blackboard at the entrance, offering burgers, which Chef Christiaan said are made from a mince mix of two-thirds dry-aged Angus, and one third hot-smoked flat rib.  Other specials options were a half chicken and coleslaw, and smoked duck with sweet potato salad, each at R95.  Lots of seating is available outside too, and Chef Christiaan seemed pleasantly surprised that all the tables were taken, and that they are doing so well, without any marketing action to date. The plan over time is for the Farm Shop & Deli to stay open until 21h00 in summer.  The menu will grow, and will contain two starters, two mains, and two desserts, reflecting the produce harvested from the farm.  Chef Christiaan said that they are employing young staff, with energy, who are having fun, and are being well managed by Alandi. 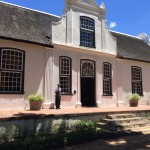 The Buffet is now served in the very attractive  Rhone manor house, which dates back to 1795, near the main Tasting Room.  The Buffet costs R260 per person, and various stations per food type have been set up in the entrance room.  Chef Christiaan’s next project will be to gradually introduce some changes to the menu.  An Afternoon Tea 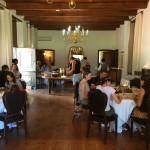 is on the cards too, at the Tasting Room end of the estate, near the rose garden, which will be revived.

I chatted to Chef Christiaan for what seemed like more than an hour, and was very grateful for his time, and all the information he provided.  One can see that he is excited about all the developments, is beaming, and is looking forward to the main restaurant opening.  He will actively look for chefs after the New Year. He is excited about his family moving onto the farm shortly, and his children relocating to Bridge House School.  He is proud of his pastry chef Carine, formerly at La Motte, and I recognised Kim Cox, who worked at the Good Food & Deli in Franschhoek at one stage, who works for Chef Christiaan too.

It feels as if Anglo American selling its property, now owned by a consortium of businesspersons, and managed by CEO Rob Lundie, has given Boschendal Farm a new lease on life.  A vast amount of money is being invested in the farm,  and the farm focus will come through more strongly, via signage and more.  The Farm Shop & Deli staff wear denim aprons and blue and white check shirts.  Chef Christiaan said that the garden staff wear similar shirts and straw hats.  Chef Christiaan says he is happier and freer, enjoying the new challenges that Boschendal Farm offers, having huge potential.  He cannot wait for his 1½ ha vegetable garden to get planted, and will be actively involved in its planning, all kitchen waste going back into the soil as compost.  They already have a herd of 500 Angus cattle, the meat of which is used in the restaurants.  The farm will reduce the use of pesticides actively and radically, composting the orchards and vineyards. A horse and cart will show visitors around the estate.  Farmer Angus supplies the eggs currently, but they will introduce their own ‘barn-raised‘ hens.  Walking and mountain bike trails are to be introduced. 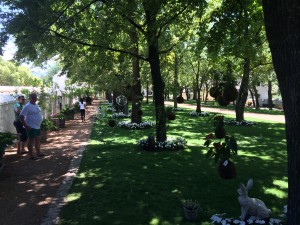 It is hard to grasp all the exciting offerings planned for Boschendal, and that this once ‘Sleeping Beauty’ wine estate has woken up. It is sure to become a further feather in the Franschhoek cap!

4 replies on “Boschendal transforms itself into Boschendal Farm, with lots of new developments!”